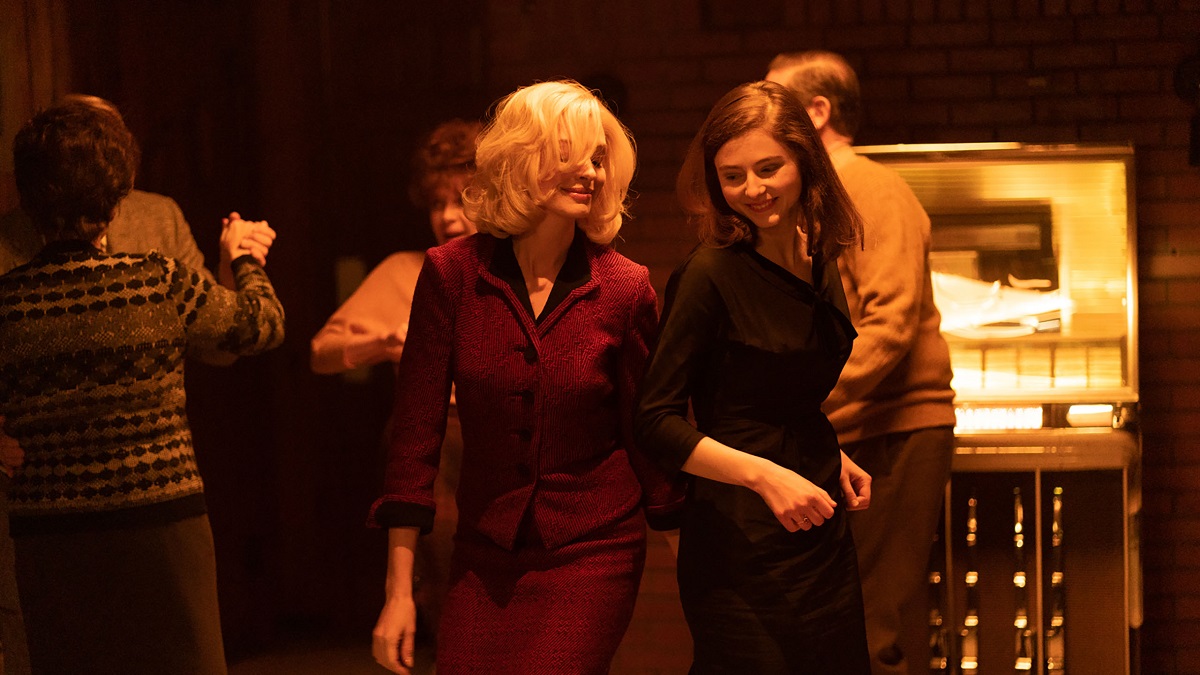 A period piece set in 1950s Boston, it charts the daily grind of Eileen Dunlop (McKenzie), who lives with her alcoholic father (Shea Wigham), works in a local prison, and breaks the monotony by disappearing into carnal daydreams. Trapped by circumstance and lack of ambition, Eileen gets a jump start when the prison brings in Hathaway’s female psychiatrist Rebecca St. John.

Statuesque, chic, and oozing glamor from every pore – she is a platinum blonde apparition who casts a spell over everyone. With a flattering wardrobe, an enticing lower register to compliment her bombshell appearance, and more than a little moxie to back it up, Rebecca makes quite the impression on Eileen.

Slowly but surely that starts rubbing off, as Eileen sees her as a potential means of escape from this down at heel existence. With a little coaxing she is tempted out to the local bar for drinks and dancing, while locals look on in consternation. Conventions are challenged by these women, as Eileen begins caving in to the attraction she feels, while Rebecca’s influence gradually makes its mark.

Beyond these two actors, only Whigham really makes an impression as Eileen’s father, who has driven himself to drink following the death of his wife. Emotionally spent, bloated through excess, and incapable of seeing past the love he lost – there is a tragic poignancy to be appreciated in the character which is crafted. With minimal screentime, the gifted character actor elevates an apparently one note role into a heartbreaking eulogy, through the combination of a singular monologue moment and his generous co-star.

Elsewhere, Hathaway cuts a rug through this movie, giving audiences an embodiment of St. John, rather than merely playing the part. In stark contrast to the dank conditions which mark out her place of employment, she is every inch the 50s movie icon minus trailing furs and gangster boyfriends. By comparison, McKenzie feels slight in the role of Eileen, never really grabbing an audience’s attention, preferring instead to acquiesce and allow Hathaway to garner all that limelight.

For fans of Todd Haynes, there is no getting away from the comparisons to Carol, which saw Cate Blanchett and Rooney Mara tackle a similar dynamic. As the older woman in this equation, Hathaway mirrors many of the performance choices which are laid out in Carol, even if the tone chosen by director Oldroyd makes things feel somewhat different.

Eileen is less about clandestine meetings, furtive glances, and secret trysts at a time when two women being together was impossible. Instead, this film depicts its femme fatale as an unknown quantity, who carries an air of mystique around her, which has less to do with sexual liberation and more to do with social non-conformity. It could be argued that these two go hand in glove, but with Carol the attraction angle was more overt and revolved around class more than anything else.

However, comparisons with the Haynes movie only work up to a point, since Eileen takes an odd turn in the final third which undermines the more nuanced choices made early on. Throughout the film vague references and minor moments are shown, as Rebecca deals with young offender Lee Polk (Sam Nivola). His is a wordless performance which feels strangely irrelevant until later on, when Eileen ventures into cold blooded interrogation territory.

Gone are the subtle moments of character progression and nuanced dialogue exchanges, only to be replaced by a guilt ridden confessional which will sucker punch audiences into submission. As far as dramatic U-turns are concerned this is a really doozy, which strips away the meek and mild layers of McKenzie, replacing them with hard edges sharp enough to slice you open.

In that moment Eileen is forever changed, while Rebecca drops the facade and looks lost for the first time. From a dramatic perspective, this development feels at odds with everything which came before, suggesting that there is a good chunk of this film taken out due to time constraints. A feeling which never really goes away, as these two women part company and audiences are left with no real sense of closure come the credits.

Director William Oldroyd offers up a 50s potboiler in 'Eileen,' which is held together by an elegant Anne Hathaway and downtrodden Shea Whigham. Steeped in period perfection but hampered by an off-kilter final third, this might not be for everyone.