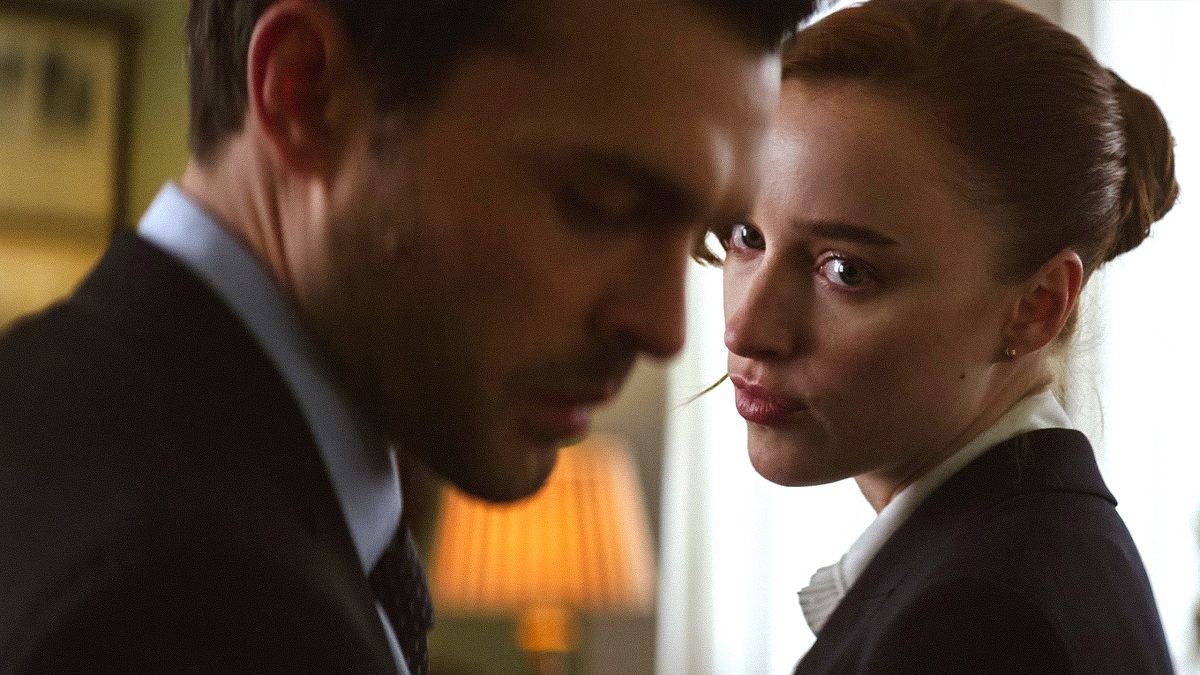 via The Sundance Institute

From writer and director Claire Domont, Fair Play is a hedge fund rom-com, which takes elements of J C Chandor’s Margin Call and pits Emily (Phoebe Dynevor) against boyfriend Luke (Alden Ehrenreich) on the trading floor of One Crest Capital.

Living together against company policy, analysts Emily and Luke are blissfully happy crunching numbers and planning their wedding. Enjoying the heady atmosphere of a wedding reception when this film opens, the happy couple are hardworking, career- driven, and affluent. On bended knee in the bathroom Adam proposes, which concludes with them both sneaking out of a side window and off into the night.

In the early morning they both get up, brush it off, and head into One Crest Capital – a brokerage firm overseen by cutthroat head honcho Campbell (Eddie Marsan). Following the public meltdown of a top tier associate an opening comes up, which soon leads to whispers of a promotional opportunity, which Luke wants so badly he can taste it. Following a late-night phone call and subsequent meeting with Campbell over drinks, Fair Play kicks things up a notch when it goes to Emily instead and dynamics change.

From that moment on, any professional equality which existed between this couple disintegrates, as disgruntlement, and jealousy slowly starts to creep into their conversations. Engagement plans which had been discussed never get passed on to Luke’s parents, while Emily’s mother only makes things worse through some well meaning engagement party planning.

On the trading floor Emily remains hungry, delivers some solid results, and gradually professional pressures start to supersede personal needs. Adam is now more concerned by matching his high-flying other half, working longer hours, and prioritizing advancement over quality time. A situation which only worsens as she continues to excel in the new role, and chooses to socialize with upper management, rather than spend time with Luke and mend the breach.

Dramatically that is where Fair Play lives and breathes from this point on, as Dynevor (Bridgerton) and Ehrenreich (Brave New World) turn this into a taut two-hander. Aided by a furiously understated turn from Marsan, the former really works hard to cast off her period drama fame, and give Emily some genuine backbone.

As their relationship continues to nosedive and a domino effect ensues, Ehrenreich intentionally chews some scenery as Luke implodes threatening to take Emily with him. Although the latter half might become formulaic and lean into bombast in an attempt to keep audiences engaged, Fair Play offers up some stand out moments of genuine dread towards the tail end, which prove extremely satisfying.

This may not be elevating the genre, but it does have some interesting things to say about the emasculating power of success in relationships. The notes that Ehrenreich gets to play here might feel conventional, but both actors are all in when it comes to making those exchanges pack a punch. That being said, although Dynevor does her best to give Emily enough hard edges as she climbs up the corporate ladder, it is Marsan who really impresses.

Steely-eyed and expressionless, Campbell is the alpha male trader in any room, who strikes terror into his underlings. For a character actor who excels in portraying soft-centered people who inherently follow rather than lead, this performance is a revelation. As instigator, orchestrator, and shark suited trading floor supremo – Campbell is a masterful turn by any measure you care to mention.

Unfortunately, what that does is overshadow certain elements of this story whenever Marsan is onscreen. In fact, his presence is felt throughout in the shadows, almost surreptitiously pulling strings like some Wall Street Svengali. Influencing the outcome of a relationship which was irrevocably undermined through his intervention, even though he was never directly responsible for the savage emasculation metered out behind closed doors.

Beyond that, Fair Play may benefit from its alternate take on gender empowerment, which subjugates expectations by seeing all the femininity drained from Emily as she takes on the masculine traits of her colleagues. However, as the only means for Luke to re-assert his dominance is both demeaning and ineffectual, this ultimately closes out proceedings on an emotional stalemate where everyone nobody wins.

'Fair Play' is a taut two-hander featuring Phoebe Dynevor and Alden Ehrenreich on scenery-chewing form, and benefits from an understated Eddie Marsan as trading supremo Campbell.