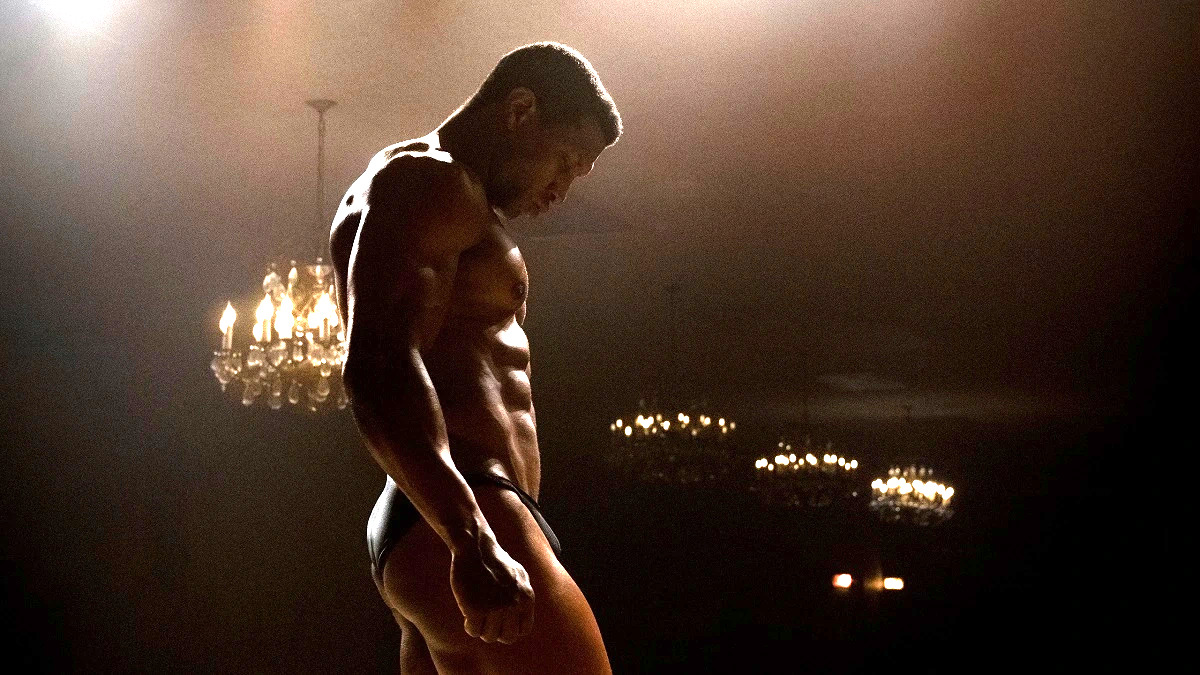 Ever since his star turn in Lovecraft Country, which would set him on the path to MCU dominance, Jonathan Majors has delivered great things. Whether that is in Netflix Western The Harder They Fall, or his prior breakout performance in White Boy Rick. Now in 2023, he lands at Sundance as Killian Maddox for Magazine Dreams.

Piling on the pounds, pushing up the calorie count, and honing his physique to become an amateur bodybuilder, this character study in celebrity obsession pulls no punches. Writer and director Elijah Bynum has gifted Majors an iconic powder keg of a personality to wrangle into submission, as audiences watch the actor strain every sinew to breathe life into this troubled man.

In a room lined with the posters of famous bodybuilders, Killian eats copious amounts of calories, cares for his grandfather William (Harrison Page), and attends mandatory therapy sessions. His violent outbursts, which have as much to do with the continual steroid injections as anything else, make him inherently unstable.

Intimate connections, personal friendships, and interactions outside his gym regime are almost impossible as he pushes himself to excel. In the role, Majors is magnetic, battling with steroid induced mood swings, whilst slowly drifting into self-delusion when events start going off the rails. Attempts at companionship with Jessie (Haley Bennett), a fellow supermarket colleague, go awry as food consumption turns their one and only date into a disaster.

Following an escalated emotional reaction to a contractor over the phone, who had done some work on his grandfather’s house, he drives downtown and destroys their shopfront. Plate glass is shattered, injuries sustained, and a trail of carnage left in his wake as a substance fueled Killian reeks unwarranted revenge.

At the other end of this sliding scale comes the Killian who shies away from intimacy, hates taking his clothes off, and in fact rejects anyone who wants to touch him. In terms of characterization, it is a delicate balancing act to pull off, as the inherent irony of someone obsessing over their body, yet unable to let anyone close enough to comfort them is tragic.

Only Pinkcoat (Taylour Paige), a local prostitute, comes close to breaking through that barrier before Killian turns tail and denies himself any salvation. Beyond an ill-advised moment of homoerotic hero worship, when he gets to meet his bodybuilding hero Brad Vanderhorn (Michael O’Hearn), that defense never comes down.

In many ways, there are comparisons to be made between Killian Maddox and Rupert Pupkin in The King of Comedy, who also went to extreme lengths in his efforts to become famous. Although the worlds of stand-up comedy and bodybuilding seem miles apart, they both require people to go out in front of audiences asking for validation. Both professions also consume the people involved, who each strive for perfection through discipline and routine.

However, in both cases the overwhelming sense of toxicity which comes from trying to attain that adulation and validation ends in self-delusion. In the case of Magazine Dreams, Killian is so blinkered by desperation and fear, that he looks to take extreme measures and level the playing field.

Beyond the side effects of prolonged steroid use, which include an ulcerated liver, anger management issues and low libido – Killian also suffers from body dysmorphia. From a performance perspective, tackling all those conflicting characteristics coherently, without diminishing any one element requires an exacting nature. As an actor, Majors proves himself to be a formidable individual, beyond the skill it requires to shape a character of depth from this chaos.

From the confrontational tour de force which he unleashes in a road side diner having suffered retribution for his frenzied downtown destruction, through to the tenderness he displays opposite his grandfather at home – no one can doubt the commitment on show. That Magazine Dreams also manages to stay clear of caricature when Killian decides to take up arms, is also commendable as this would have undone everything which had come before.

For audiences who decide to strap in and experience this latest slice of Jonathan Majors pre-Kang, they will be comforted by the fact that he has chosen the road less traveled by when it comes to career choices. Not only qualifying him for immediate indie gold status, but affording this performer the luxury of mainstream successful to help fund future projects.

Carving off a slice and stepping things up a notch, Jonathan Majors delivers another formidable performance in 'Magazine Dreams.' Packing on the pounds and dialing that drama up to 10, audiences will finally get what makes this actor so special.