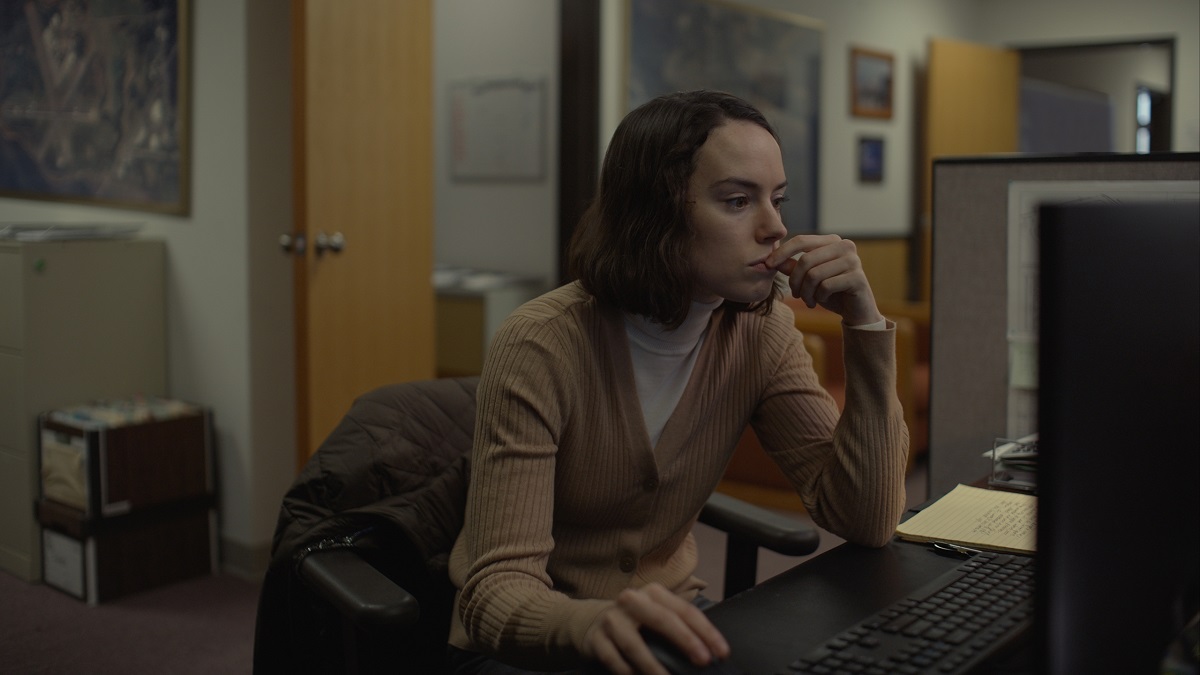 Sometimes I Think About Dying might just be the revelation audiences have been waiting for from Daisy Ridley as she charts the lonely existence of Fran, an office worker who spends her days watching others interact while daydreaming about death.

Plucked from obscurity by J.J. Abrams to headline an as-yet unwritten Star Wars sequel, Ridley had stardom forced upon her, rather than taking time to forge a route free from scrutiny. From the ill-fated and much maligned Chaos Walking opposite Tom Holland, through to the star-studded Agatha Christie adaptation of Murder on the Orient Express, she has rarely looked comfortable.

In many ways, wealth accrued from the Star Wars prequels has afforded her the opportunity to pick and choose projects based on interest rather than urgency. Meaning that in the main, Ridley has been able to do things which raise her profile, rather than come with any type of paycheck. In this low-key indie character study much of her performance, for those first 20 minutes at least, is conveyed through prolonged silences.

Director Rachel Lambert follows Fran’s eye-line, which finds the camera often focusing on a neckline, an optical mouse, or a construction crane at work outside. There is so much restraint which shapes this film, that audiences will automatically feel distanced from everyone else. It is so much a film about regimented routine, enforced isolation, and painfully low self-esteem, that Fran’s first words are almost a relief.

For that reason, other actors who fill out this ensemble feel like so much background noise to be ignored, allowing audiences to focus on Fran. She is always on edge, always avoiding eye contact and perpetually clenched in anticipation of any interaction. Where this emotional rigidity comes from is the first of many questions which spring to mind, as she stands alone observing others and occasionally slipping into a dream state to lie in stasis.

There may be some audience members who see shades of Walter Mitty in this portrayal, as despite her best efforts, Fran is inherently romantic. In abstract sequences which pepper this low-temperature piece, there are flashes of avant-garde imagery, where Fran is captured reclining on moss in a forest glade. Other classically posed examples find her looking demure beneath a pyre, while waves crash on the beach just out of shot.

That combination of enforced introspection and artistic distraction, instills this film with a degree of vibrancy despite Fran’s dour demeanor. Existing purely inside her imagination, she remains cut off from people until Robert (Dave Merheje) arrives in the office – an equally introspective man who first reaches out an olive branch over the office messenger system.

Much of the pleasure to be had from Sometimes I Think About Dying is watching how their relationship develops. Withdrawn, reticent, and disinterested in the beginning – Fran slowly comes out of her shell as Robert persists, allowing a gentle and intriguing connection to develop between two people, who are simply looking for companionship.

From their first awkward date and stilted conversation afterwards, through to an ad-hoc murder mystery night where Fran finally comes into her own – they both provide this film with its crucial heart and soul. Meanwhile, Lambert is brave enough to let the material do all the heavy lifting, while these two actors shine a light into the loneliness of a crowded room, slowly allowing each other into their respective worlds, while colleagues remain largely oblivious.

Elsewhere, other assets which really bring this film to life include the contributions of cinematographer Dustin Lane and composer Dabney Morris. A muted color palette and distinct framing style taking full advantage of the location, while unique musical interludes underpin emotional moments and complement the onscreen imagery. In turn, it ties everything together into something intentionally disarming, without once feeling maudlin or self-indulgent.

If anything, Sometimes I Think About Dying is an ultimately optimistic film, which feels life affirming and poignant in parts. That it also affords Ridley one of the best roles she has had in recent memory, only makes this more of an intriguing proposition. For anyone who likes their drama heartwarming and low-key, this should be a mandatory addition to watch lists later in 2023 when it garners a theatrical release.

Daisy Ridley is riveting in this low-key character piece on loneliness. Director Rachel Lambert draws out a performance from the actor, which might just change some opinions and have others paying attention.