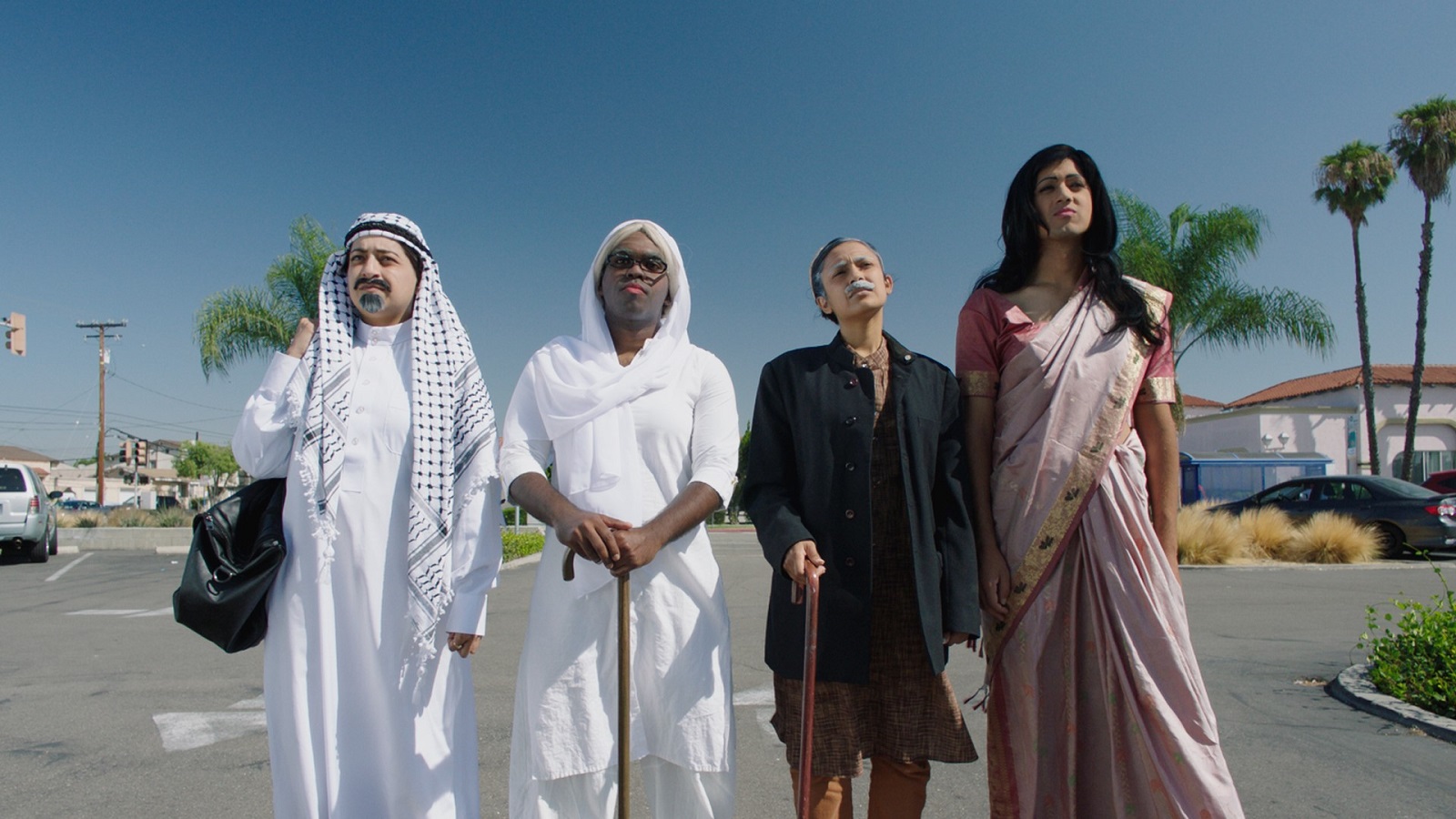 Brimming with wide-eyed invention and featuring an ensemble cast on solid form, 'Four Samosas' is a concise piece of cultural comedy, with some B-movie heist elements thrown in for good measure.

Four Samosas might be the most unique film to come out of this year’s Tribeca Film Festival, as it affectionately incorporates Indian cultural ideals into an American B-movie heist format.

Bending genre expectations to breaking point, whilst introducing elements of farce so absurd as to verge on sheer genius. all while layering concisely comedic introductions on top of each other in quick succession, Four Samosas never ceases to gather momentum over its running time, feeling like a cross between indie totem Clerks and Reservoir Dogs minus the guns, violence, or bad language.

Written and directed by Ravi Kapoor, this is a film which defies description, even if IMDb have tried their best to make it sound conventional. Vinny (Venk Potula) is a South Asian American wannabe rapper, who works full-time at a saree shop. His ex-girlfriend Rina (Summer Bishil) is due to marry Sanjay (Karan Soni), a dim-witted poop-peddling entrepreneur. However, with the help of best friend Zak (Nirvan Patnaik), brainbox Anjali (Sharmita Bhattacharya), and unbalanced tech engineer Paru (Sonal Shah), he plans to pull off a diamond heist.

With Potula, Bhattacharga, Shah and Patnaik all on charisma overdrive, Four Samosas is a film which audiences will never want to leave. There is such an abundance of invention verbally, visually and culturally that repeat viewings should be mandatory. The dynamic ensemble cast really embrace the piecemeal plot and madcap energy, which never lets up from start to finish, also making sure to pack Bollywood dream sequences and micro budget Mission: Impossible skits into the mix along the way.

Writer/director Kapoor is also savvy enough to switch direction whenever anything feels stale or conventional. Veering between extreme farce, as illustrated by a six-hour attempt to crack open the eponymous safe, to slow motion trolley dashes in questionable ethnic disguises. Throw in some curveball character work from Shah as the emotionally unhinged Paru, and Four Samosas promises to be something which stays with audiences long after those end credits.

What this film also does is create a unique crossover between cultures, which inherently promotes inclusivity. By exposing cinema audiences to a genre mix which has rarely (if ever) been brought together in this manner, and lifting liberally from various indie auteurs who have subsequently moved over into the mainstream, Kapoor effortlessly achieves something similar himself, yet brings a different slant to proceedings by intentionally lampooning his own belief system and traditions.

It marks him out as a bold filmmaker, more than capable of making contemporary points with pocket change. However, the same could be said of Quentin Tarantino or Kevin Smith, who have never really lost their budget-busting sensibilities. Of the two, it would be fair to say Smith still works within the confines of indie, while Tarantino has moved into the mainstream but retained his economic outlook.

Granted, in both cases their storytelling canvases have expanded with more money, yet they each continue to be driven by story and character, rather than anything more ostentatious. This is a road Kapoor may end up venturing down in due time, once studios get wind of Four Samosas, that achieves as much as Clerks ever did in terms of innovation. Not only high praise for this fledgling filmmaker, but an indication of what great writer/directors can deliver when left alone.

In fact, it is very hard to find fault with this film, which tackles the integration of other cultures into Los Angeles with such ease. There are so many obstacles which might have presented problems for Kapoor, but by keeping the action within a very small community, he fully exploits any potential for cultural comedy between these characters.

If anything, Four Samosas could have done with being a bit longer. There is such affection between these characters, that an hour and 20 minutes is barely enough time with them, which in turn will leave audiences wanting to jump back in and enjoy what is genuinely a great piece of filmmaking. Incisive, laugh-out-loud funny, and burdened with some of the best character work to grace a festival circuit for some time, this Tribeca selection deserves all the attention it gets, plus a huge audience and enthusiastic marketing campaign to spread the word.

Tribeca Review: 'Four Samosas' is a side dish with extra heist thrown in

Brimming with wide-eyed invention and featuring an ensemble cast on solid form, 'Four Samosas' is a concise piece of cultural comedy, with some B-movie heist elements thrown in for good measure.