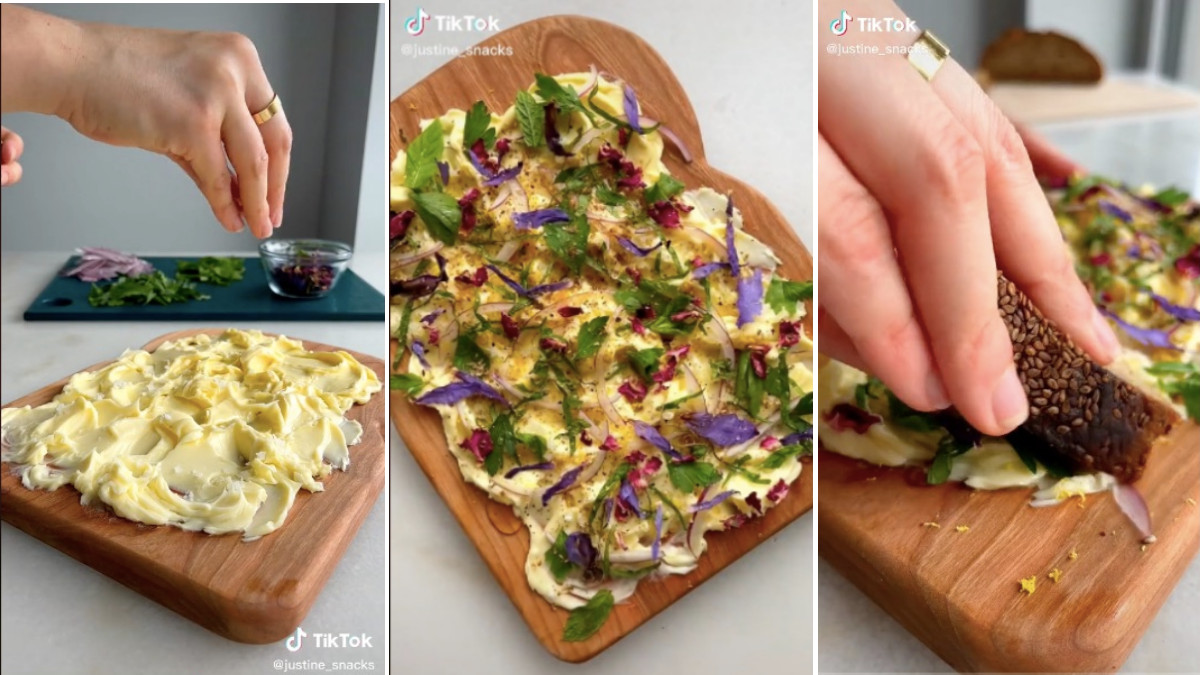 Every now and then an offbeat or delectable food trend will capture the attention of TikTok, and such is the case with a new phenomenon that has people declaring charcuterie boards to be passé. Make way for the rise of “butter boards,” which are exactly what they sound like.

Butter boards essentially take a wooden cutting board or butcher block, but instead of spreading it with an array of cured meats, cheeses, and accompaniments, one spreads the board with softened butter and tops it with ingredients such as herbs, edible flowers, roasted garlic, flakey salt, or honey. The seasoned butter is then spread onto slices of preferably warm, crusty bread — or some people dip the bread right into the butter. In either case, the important takeaway is that the bread serves as a vehicle for the butter, as well it should.

Because these butter boards are so versatile and pretty to look at, it’s no surprise that TikTok has become inundated with people showing off their own creations. While the jury remains out whether butter boards are, in fact, better than charcuterie boards — we’ll go ahead and point out that a side of softened, seasoned butter likewise makes a great addition to any charcuterie board.

Where did the butter board TikTok trend start?

The first butter board popped up on TikTok less than a week ago, compliments of TikTok user and recipe developer Justine Doiron of Justine Snacks, who claims that she wants to make the food trend “the next charcuterie board.” In her tutorial, Doiron smears two sticks of softened butter all over a wooden board and then tops it with flaky salt, lemon zest, herbs, edible flowers, and coriander honey.

“I like this one idk I’m in a silly goofy butter mood,” Doiron captioned her video.

Doiron credits chef Joshua McFadden for the idea, who included a similar recipe in his 2017 cookbook Six Seasons: A New Way with Vegetables. McFadden likewise shared the recipe with Sunset Magazine, which is detailed as follows.

“On a platter or board, smear 1 [stick] butter 1/8 to 1/4 in. thick, using an offset spatula. Scatter generously with herb leaves. Scatter with sliced green onion, flower petals, salt, and pepper. If you like, add cracked coriander seeds, chile flakes, and poppy seeds. Serve with baguettes.”

In other words, the recipe is pretty hard to mess up. Just cover a board with butter and top accordingly — there’s not really a margin for error here.

Should I make a butter board?

Whether you decide to make a butter board is between you and your god. While they definitely look prettier than say, a bowl of softened, seasoned butter with a knife or spreader — be warned that cleaning butter off the entire surface of a wood board isn’t for the faint of heart.

But for those with their hearts set on this messy but ‘grammable dish, there’s no shortage of inspiration on TikTok, where ideas for topping a board covered in butter run the gamut from appetizing to eyebrow-raising. Here are just a few examples to get you started — from figs to goat cheese and apricot and even a “carnivore” butter board with bacon and sausage.