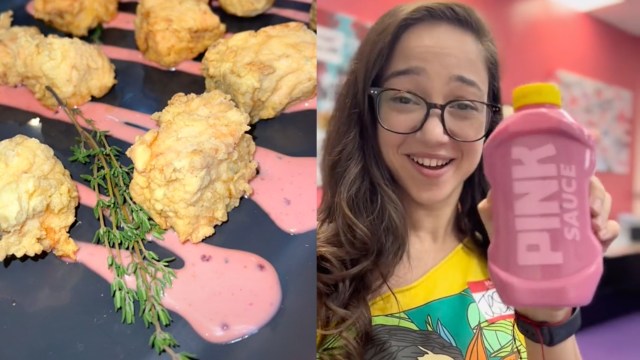 A new culinary curiosity spread like wildfire through TikTok in July of 2022, spreading news and hype about the strange and intriguing “Pink Sauce.”

The odd condiment persists as a tempting mystery as people work to hunt down details about the rose-colored sauce. Questions about its ingredient list — most importantly, the elements that give it its color — as well as its nutritional value and safety to consume swirled for weeks, as the conversation about Pink Sauce took over social media. It’s faded in recent weeks as furor faded as well and new TikTok topics sidled into the limelight. In the background, however, Pink Sauce creator @chef.pii has been hard at work getting her viral sauce onto shelves.

Is Pink Sauce coming to stores?

@chefpii’s TikTok page has been absolutely flooded with Pink Sauce content for months now. Her earliest Pink Sauce videos began dropping in mid-June, and — as interest grew — more and more videos featuring her brilliantly-colored sauce began to populate her page. Within a few weeks, interest had risen so high that @chefpii was bottling the oddly-colored substance up and shipping it off. In its early days, the sauce was only available via @chefpii’s online store, where bottles ran for $20 a pop. The formerly simple site has since gotten a major upgrade, showcasing the sauce’s rise from online craze to legitimate product.

In the coming months, it seems a bottle of Pink Sauce will be far easier — and likely far cheaper — to track down. On Aug. 17, it was announced that the brand had managed a partnership with Dave’s Gourmet. This should see the sauce headed to stores soon. Dave’s Gourmet will take over the task of producing the sauce, a job formerly thrust on Chef Pii and her friends, and production will initiate “on a commercial scale under the required food manufacturing guidelines.” This should alleviate rampant concerns from users regarding the safety and quality of the product.

Dave’s Gourmet is making a few changes to the established recipe, in order to “make the sauce less complicated, dairy-free, and clean of any preservatives, artificial colors or flavors.” By collaborating with a more knowledgeable brand, when it comes to commercial production, Chef Pii’s sauce should see a “shelf-stable version” hit stores within a few months.

Pink Sauce is expected to land on “e-commerce platforms, in restaurants and on major food retailers’ shelves” starting in the fall, according to NBC News. No specific dates, or even months, have yet been announced, but fans of the viral fuschia sauce are unlikely to miss it once it lands in stores.