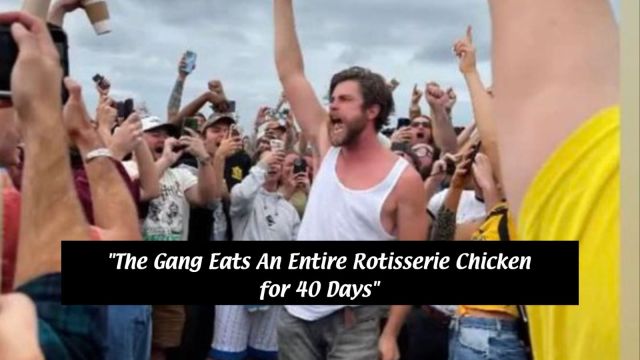 Rotisserie chicken stores may be worth investing in if you’re based in Philadelphia with a local man embarking on a bizarre daily ritual which feels straight out of a sitcom like It’s Always Sunny in Philadelphia.

Apropos of seemingly nothing whatsoever, a Philadelphia has made it to 40 straight days of consuming an entire rotisserie chicken as crowds begin to surge in to watch him give a chicken a greasy, barbecue sauce fueled death. Seriously, there is almost no context about how this situation came to be, other than the original goal was just 30 days.

Rotisserie is on the menu, and the world can only reminisce on some of the crazier plots and schemes featured in It’s Always Sunny in Philadelphia. Similar schemes from the show have included a strange chicken airline frequent flyer points plan (as seen in “Charlie Work”), as well as the fan favorite rum ham which is so dearly loved by Danny DeVito’s Frank.

Pennsylvania’s Rotisserie Man has amassed a large following on Twitter, with nearly 29,000 followers joining him on a mystical journey through chicken consumption. He’s even begun to post adverts for his feasts, with his 40th feast being held at an abandoned pier near a Walmart. As you do.

Upon the completion of his meal, a loud cheer emanated from the unsightly pier. More life had been shown today at the pier than probably ever before, proving the world needs more rotisserie chicken watch-a-longs. Whether or not day 40 will be the final day for this brave man remains to be seen, but with the eyes of the world now upon him he may need to continue.

It’s Always Sunny in Philadelphia is now the longest-running American sitcom with fifteen seasons aired, and several more on their way through to an eighteenth season. When the sixteenth season airs, it’s now a necessity they bring this brave man on for a cameo.