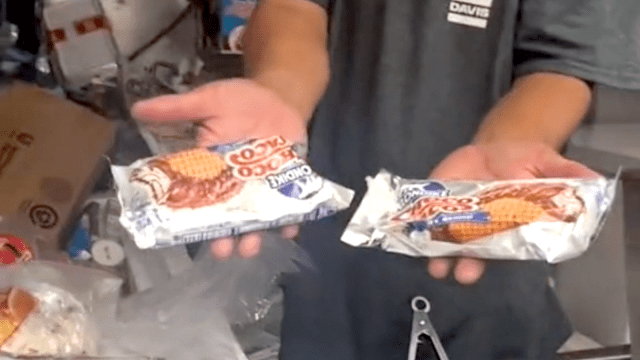 As they say on TikTok, anything can go viral. Even a Choco Taco.

The beloved ice cream delicacy has been caught in a hailstorm of publicity ever since one TikTok user @arianedatiltv documented her journey to find the chocolate dessert after Klondike announced it was being discontinued.

In the video, @arianedatiltv records one ice cream man’s ventures through the bowels of his freezer as he tries to dig up the chocolatey goodness. Just when we think all hope is lost, he pulls the last two Choco Tacos from a brown box, handing them over in exchange for eight bucks.

For many, the news that Klondike discontinued the Choco Taco came as shocking, which explains the over 22 million views and almost four million likes the video has garnered. In the comments section of the video one user @sorbeetz wrote, “THEY DISCONTINUED THESE??? they were my grandmas fav to give us.”

Alas, it is true. Klondike even confirmed it was discontinuing the Choco Taco in a tweet on July 28, posting a picture of a oversized Choco Taco standing behind a podium with the caption, “I want to address the rumors: I’m really being discontinued, it’s not a PR stunt. I knew you loved me, but not THIS much. While I reflect on this outpouring of support, we are discussing next steps, including what to do with the last 912 (we counted) tacos at HQ. Stay tuned…”

It’s been close to two months since Klondike announced the news of its limited quantity and @arianedatiltv viral video has surely only sped up its eventual extinction.

Klondike has not addressed the viral video or announced any plans to revive the Choco Taco despite the hopes of many. Instead, it’s holding true to its word and promoting when and where lovers of the Choco can get their hands on the final taco before it runs out for good.

It’s unlikely Choco Taco will get the rebirth so many 80s, 90s, and even 2000s kids hope for. Then again, if a chocolate ice cream taco can go viral on TikTok, anything can happen.

We Got This Covered will update you with this very important news if or when it unfolds.