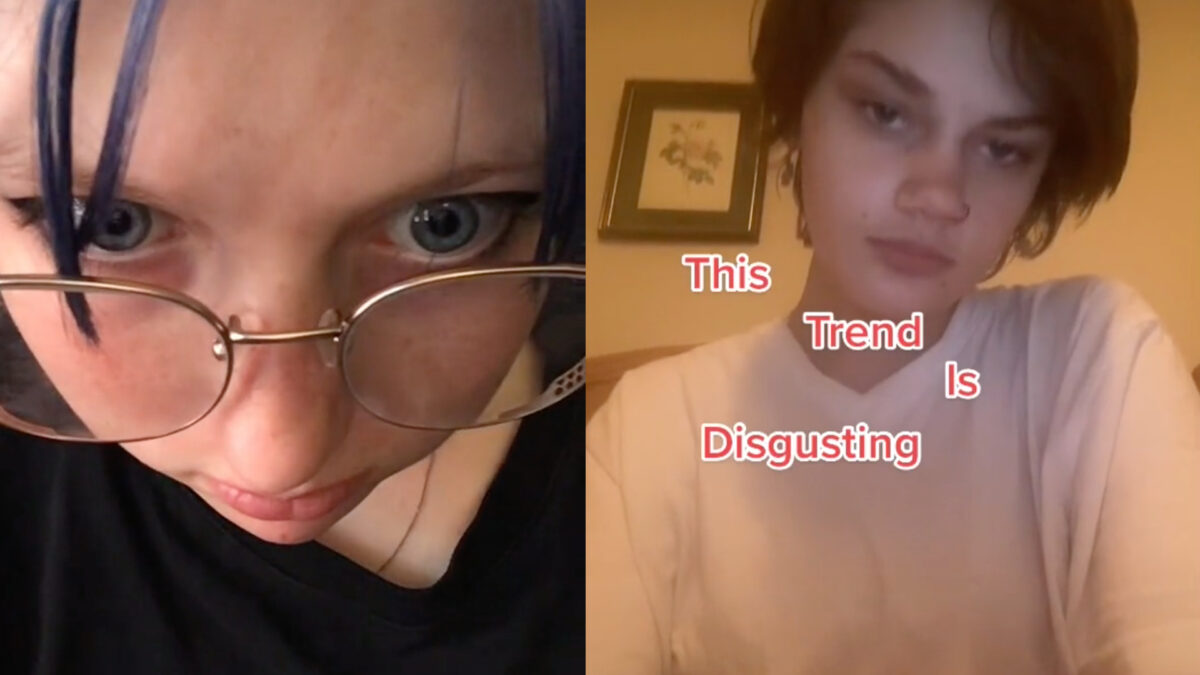 TikTok is one of the biggest social media platforms on the planet. Its domination is clear across the web, as content made on the video-sharing app spreads to every corner of the internet, sparking conversations and elevating creators to new heights.

One of the latest conversations to arise on the popular app was prompted by a new trend, one which has been accused of being transphobic. A number of videos leaning into the trend have garnered backlash for their perceived treatment of trans people, and quickly sparked a debate about consent.

The ‘binder off’ trend

The controversial trend that’s sparking a site-wide debate is innocuous enough, particularly for those engaging in it. It largely revolves around those in relationships with trans people, particularly trans men. Many trans men use something called chest binders to gently compress their breast tissue, aiding in providing them with a physical appearance that suits their gender. Binders have become increasingly popular in recent years, as people lean on the non-invasive and simple option to reduce the visibility of breast tissue.

Most binders shouldn’t be worn for more than around eight hours at a time, however, to reduce risk of potentially harmful side-effects. That means that, even for people who feel far more comfortable with a binder on, some portion of the day must be spent with their chests unbound. For many, this might be an uncomfortable experience, as they feel more relaxed and at-home in their skin when the binding is in place.

The trend that prompted TikTok’s latest site-wide argument sees the partners of frequent binder users reacting to their unbound chests. Each of the videos participating in the trend uses a similar caption, and a similar musical track, providing a point of view of when “my partner takes their binder off.” Most of the videos see the participating TikToker ogle the exposed chest following its unbinding, treating it as a sexual aspect of their partner’s physical appearance.

In many instances, this wouldn’t be an issue at all. These people are presumably in adult, consensual relationships, and anyone in a romantic pairing should find their partner’s body attractive. In the case of trans binder-users, however, this trend can be damaging and delegitimizing. Many trans men see their chests as a clear symbol of a gender they’ve left behind, and the entire point of the binder is to conceal. When the binder comes off, the dysmorphia that many trans men feel is signified in their breast tissue, and thus sexualizing this area ignores the potential trauma some trans men associate with this area of the body.

Most, if not all, of the videos participating in this trend are clearly well-meaning, and treat the trend with a goofy, light-hearted tone that plainly isn’t intended as any kind of an attack. Plenty also indicate that the poster asked permission before ogling their partners, which is an entirely different scenario than one eyeballing, and sexualizing, an area many binder-users might feel self-conscious about without asking.

This issue prompted a widespread conversation about consent, as many viewers plunged into the comment section to defend the right to enjoy their partner’s body. Their arguments boil down to a single, specific point: so long as both parities agree to it, they should be free to enjoy one another in whatever way they choose.

Not everyone agrees, however, and backlash soon followed. A number of critical TikToks have been spawned of the trend, as allies take to their own accounts to share their thoughts on the matter. The majority of critical TikToks likewise follow a similar structure, as users call the trend out as “disgusting” and note that ogling a trans person’s chest “just shows that you don’t see them as who they are.”

Other criticisms say the trend “shows you don’t respect your partner and their identity when they aren’t wearing a binder.” This seems to be the primary pushback against the trend, as trans people and their allies take to the app to explain why sexualizing an unwanted piece of someone’s body can increase their dysmorphia. Particularly from a loved one, taking part in a trend like this can be quite damaging, and critical TikTokers want to spread the word.

They’re doing so via a wave of reproachful videos, taking aim at the trend and denouncing it as “gross.”

Criticisms of the ‘binder off’ trend are proven at least partially correct via a review of TikTok’s flush binder content. Many videos show binder-users complaining about the necessity of removing their binder, showcasing the genuine issues many users have with their unbound chests. To highlight, and even sexualize, this area of their body goes directly against their own comfort levels.

The trend is clearly something that cannot be treated as a monolith. The issue varies widely from case to case, with some binder-users fully comfortable with their partner’s interest in their chest, and others firmly against it.

The conversation sparked by the ‘binder off’ trend is surprisingly wholesome, and thoroughly necessary, as even users in stark disagreement share their perspectives and thoughts on the matter. The conversation ultimately revolves around respect and consent, and any trend that sees people sussing out how best to support their loved ones is a win in our book.