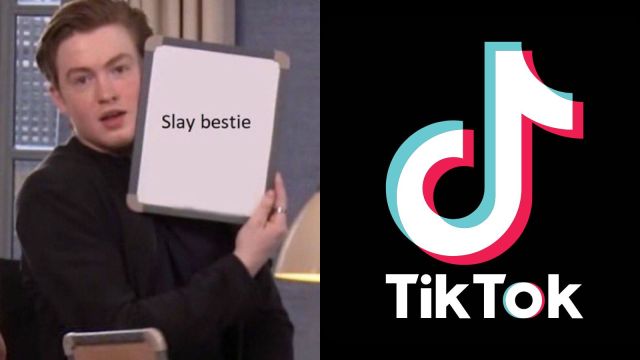 The internet has birthed some astonishing new words, with the likes of webinars, podcasts, poggers, and more recently a swathe of slang inspired by LGBTQIA+ and people of color. So many new words have been added to the English lexicon in less than a decade of social media.

Among these is a recent favorite of zoomers and millennials on TikTok: slay.

While everyone and their grandpa know what its original meaning is (to kill something), it now means something much warmer and fuzzier to the generation of crippling TikTok addicts.

What does “slay” mean on TikTok?

Adopting a new definition to an already existing word takes quite a while to go mainstream, and slay is no different. First entered into Urban Dictionary in 2013, the new version of slay took off online on places like Tumblr, Instagram, and Twitter.

Modern-day, “slay” means to greatly impress someone, to wear a fashionable outfit, or make a grand and knowingly over-the-top statement. Examples would be going out into a club wearing a designer jacket, which would be a “slay”, or doing an action causing a great impression on someone.

Due to how the internet works, it has gone in and out of daily vocabulary. For a while, the term was deemed cringe-worthy, before it made a post-irony resurrection on TikTok, alongside words like cap, based, and nearly anything that was popular in 2016. By the time 2032 rocks around, a word like “scromiting” could be part of the daily lexicon.

It’s a brave new world, and a new definition could be added again to “slay” as internet denizens grow up with the term and pop culture changes.