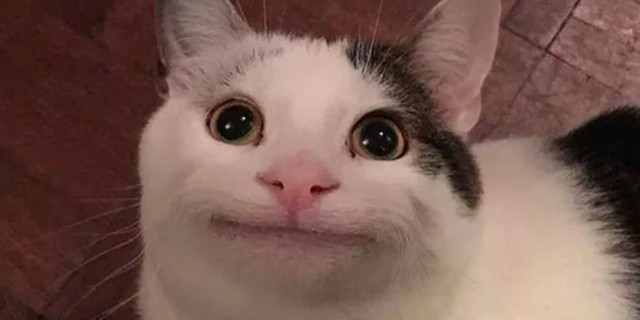 Cats and memes go together like bread and butter. Since the famous “I Can Has Cheezburger?” meme arrived on our computer screens over a decade ago, cats have become one of the most popular sources of memetic and exploitable images.

And one of the more recent stars of the genre is Ollie the Polite Cat. But where did this meme come from, and is that popular polite expression genuine, or is it edited?

What is the origin of the Ollie the Polite Cat meme?

The Polite Cat image can trace its origin to a post on the popular meme and image-sharing website 9Gag. This post was made by user enpu on June 7th, 2018. The post was titled: “My face when someone expects me to be excited about something that I’m not excited about.”

The post features the image of the smiling feline that everyone has come to love. However, the picture didn’t truly take off until it was placed into a different meme. This meme was a fake text conversation between someone and their landlord. While the landlord initially said no pets were allowed, the image of the smiling kitty won him over. Leading to the now-legendary phrase:

“OK, I will make an exception because he looks very polite.”

This image was first uploaded by Instagram user livewithflip, who would repost it once more on their apartment.app Instagram account after they switched accounts. This meme quickly became popular, and it experienced a massive explosion in popularity when someone posted it on Reddit’s GoodFakeTexts community, where it got over 10,000 upvotes and spawned a whole slew of spin-off memes.

Is the Polite Cat real?

Of course, many people started to wonder where the cat image originally came from. In the summer of 2018, people finally got their answer. An Instagram account called @Khan_Amon_Ra was made. This account claimed to be the cat’s original owner, but there was some debate over this fact. Later, the profile was hacked, and a second account, called @Polite_Cat_Olli was created, but later, this account would change once more to @polite_cat_olli_official, which is still active today.

This account features many pictures of Ollie, proving that whoever runs it is the cat’s owner. Or at least works with the owner to get new and original photos.

Is the Polite Cat image edited?

Over the years, many people have wondered if the Polite Cat image has been edited to give it the distinctive and memetic smile. Unfortunately, it is currently unknown if the image was edited or not.

In more recent photos of the feline, you can see hints of the famous expression. However, it is not as pronounced as the expression seen in the meme.

However, some videos of Ollie feature the signature expression, making it hard to tell one way or the other.

Many argue the image is edited, pointing to several pictures where the mouth area is blurry, and the whiskers seem overly distorted. Of course, it could be possible that the meme image is a trick of the light or some form of camera issue caused by a filter that was simply not designed for cat facial structures.

Alas, until the owner confirms, we have no sure way of knowing.