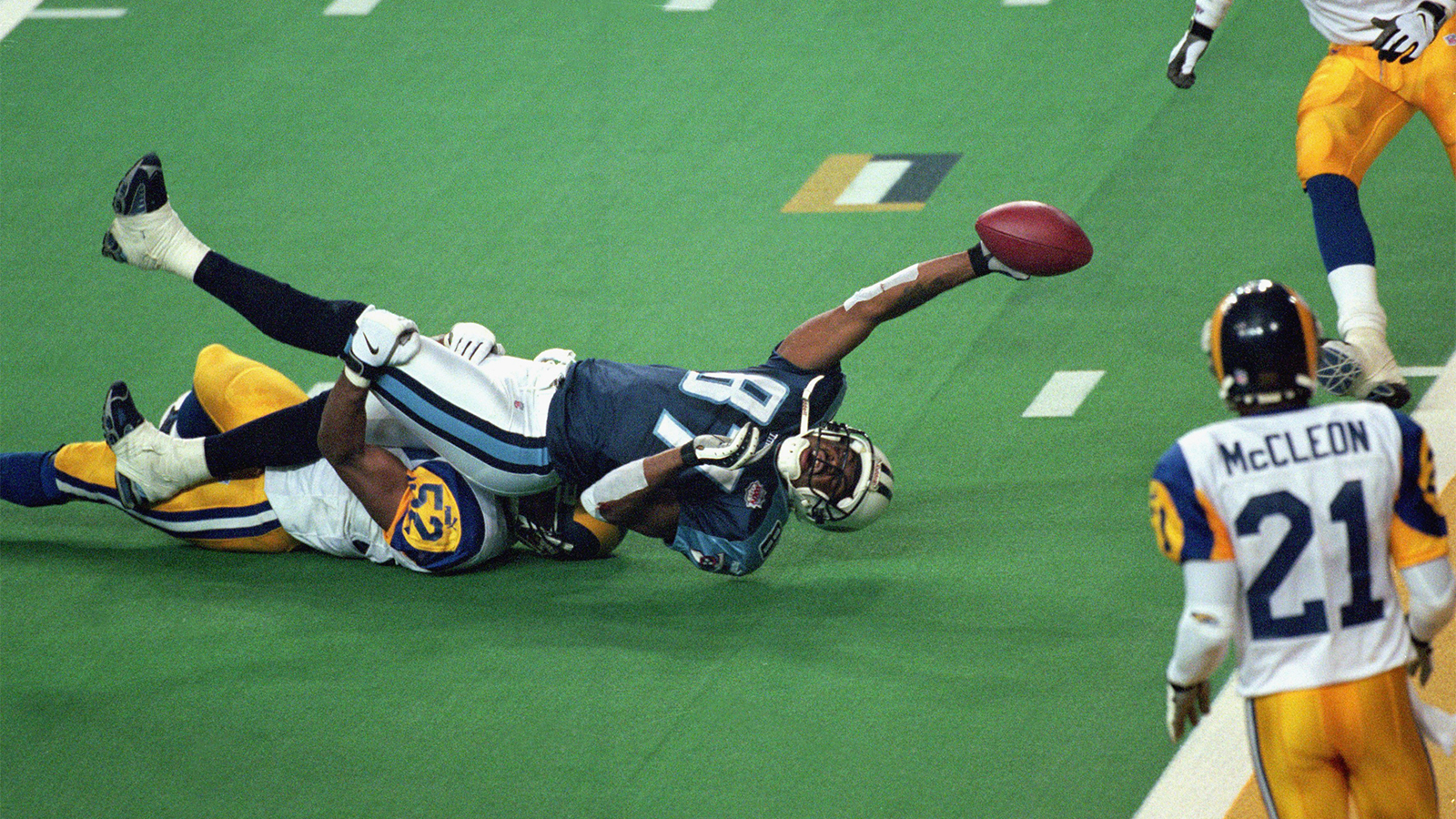 Imagine being foolish enough to attempt a countdown of the 10 greatest Super Bowls of all time. Well, you need not imagine it, because I am that fool.

Any Super Bowl in this list can be argued as No. 1, and no doubt there will be people that argue for each one. There have been so many great Super Bowls in the past 30 years that the early Super Bowls, only some of which were truly great, barely make anyone’s list. In fact, as a major fan of NFL history, I’m rather appalled at myself for not including Super Bowl V or Super Bowl X or quite a few others.

I will at least be kind enough to start off with a bonus pick that just missed the top 10, and then get into the countdown from there.

Note: Each Super Bowl will be presented with its roman numeral, followed by the year of the season that game concludes, customary for the NFL.

Brett Favre and the Packers were the defending champs and were expected to beat the wild card Broncos, actually entering the game as 11-point favorites, but their only lead was at 7-0 in the first quarter. They had to contend with Terrell Davis running for 157 yards despite suffering a migraine mid-game. He also scored three touchdowns, the last of which broke a 24-24 tie with less than two minutes remaining in the game.

Elway wasn’t spectacular but he was effective and he was finally awarded with the Lombardi Trophy (over the Packers, no less) that had eluded him for most of his career.

This was an all-star spectacular.

The Cowboys were the defending champs. The Steelers had won two Super Bowls including one over the Cowboys in 1975. This was a star-filled game for the ages.

An incredible 17 future Hall-of-Famers played in this Super Bowl, with seven others who coached or were executives for the respective teams. That’s 24 Hall-of-Famers in all!

The game was thrilling almost immediately, and the first half had more excitement than almost any previous Super Bowl game had in its entirety. The score was 21-14 at halftime and the Steelers seemed to finally pull away in the fourth quarter with a 35-17 lead.

Yet ther Cowboys were led by Roger Staubach, known as “Captain Comeback,” and true to his nickname, he spearheaded two late touchdown drives to get Dallas within four points. It wouldn’t be enough as the Steelers safely recovered an onside kick attempt and became the first team ever to win three Super Bowls.

Remembered mostly for how it ended, the game itself is highly underrated, as the teams went toe-to-toe for the entire contest. When Tom Brady found Julian Edelman for a three-yard touchdown pass with two minutes left, it gave the Patriots a 28-24 lead, but then the Seahawks then moved 79 yards on just six plays and found themselves a yard away from the end zone.

Clearly, with 26 seconds left and a timeout remaining, the Seahawks simply needed to give the ball to their strong and reliable running back, Marshawn Lynch, for an easy touchdown. They decided otherwise.

Russell Wilson gunned a quick pass intended for Ricardo Lockette, but Patriots DB Malcolm Butler aggressively stepped up and intercepted the ball while colliding with Lockette. Thanks to the Seahawks outthinking themselves, coupled with one of the greatest interceptions possible, the Patriots were Super Bowl champions again for the first time in a decade and they would win two more in the next four years.

The Rams were seeking their second Super Bowl win in three years behind Kurt Warner and the outstanding aerial offense of the St. Louis Rams. However, it was the major underdog New England Patriots who were about to shock the NFL and begin a dynasty that truly no one saw coming.

Backup QB Tom Brady was thrust in as the Patriots starter late in the season when Drew Bledsoe was injured. It wasn’t realized at the time that it was the turning point in the team’s season and, even more so, their history.

The Patriots benefitted in the Super Bowl from outstanding defense, leveling the Rams’ receivers throughout the game and even scoring a touchdown on an interception return courtesy of Ty Law.

In fact, the Patriots led 17-3 in the fourth quarter, but the Rams rallied to tie the game, only for Adam Vinatieri to kick the game-winning field goal on the last play of the game to give the New England Patriots their first-ever Super Bowl win.

Two years before falling to the Patriots, the St. Louis Rams outlasted the Tennessee Titans for their first Super Bowl victory. Their offense was an aerial display of greatness which earned the nickname “The Greatest Show on Turf.”

They had a 16-0 lead late in the third quarter, but the Titans came back via two Eddie George touchdowns and an Al Del Greco field goal. But on the first play from scrimmage after the Titans tied the game, Kurt Warner connected with Isaac Bruce for a 73-yard touchdown to give the Rams a 23-16 lead with just over 2 minutes left.

Titans QB Steve McNair responded by engineering a drive that covered 78 yards in 11 plays, landing at the Rams’ 10-yard line with five seconds remaining. With one chance left to tie the game, McNair completed a pass to Kevin Dyson inside the 5-yard line — tackled by Mike Jones, reaching out toward the goal line with the ball, hoping he could muster enough momentum to save their Super Bowl. Reader, he did not, and Jones ended up preserving victory for the Rams.

With just over two minutes to go in the third quarter, the Patriots trailed the Falcons 28-3. The game was over. Great comebacks never happen in the Super Bowl so the mere idea of a comeback in that scenario was foolish.

New England surged to score 31 total points in their last four regulation drives, plus one in overtime to win the game. A key fourth-quarter takeaway by Alan Brach, courtesy of a Dont’a Hightower sack and forced fumble, helped greatly in their successful comeback effort.

James White scored three touchdowns during the comeback, including the game-tying score and the overtime game-winner, but Brady won MVP honors for engineering what appeared to be the impossible.

The Buffalo Bills were a machine, slamming the Raiders in the AFC Championship 51-3. The Giants, however, were machine killers, stunning the 49ers in the NFC Championship in San Francisco to deny them a third consecutive Super Bowl.

The Giants were led by Jeff Hostetler, who began the year as the backup QB but took over when Phil Simms went down to injury in December.

Giants head coach Bill Parcells knew that the secret to stopping Buffalo from scoring so many points was to keep the ball away from them. So, they put together time-consuming drives when they had the ball, scored 20 points, and held the Bills to 19. Overall, the Giants had the ball for over 40 minutes — but it still appeared to not be enough, as the Bills put themselves in field goal range for a chance to win their first-ever Super Bowl.

As time expired, Scott Norwood kicked the ball from 47 yards away to decide the game. It had the distance but it sailed wide right.

The game also featured one of the greatest drives in Super Bowl history when Otis Anderson and the Giants began the second half by marching 75 yards in a 16-play, nine-minute drive, culminating in a touchdown. The best play of that drive was a Mark Ingram play on third and 13. He caught the ball six yards short of the first down and had five Bills’ defenders in front of him. He moved, navigated, spun, and willed his way to a first down to keep the drive alive.

Truly, the Giants seemed to will their way to victory. (And as Buffalo fans are well aware, the Bills have yet to win a Super Bowl.)

New England and Carolina combined for five touchdowns in the final 15 minutes, making it very possibly the greatest fourth quarter in Super Bowl history. The most spectacular of those went the Panthers’ way, with Jake Delhomme and Muhsin Muhammad combining for an 85-yard touchdown which pulled them into the lead and still stands as the longest pass-play in Super Bowl history.

The back-and-forth led to a 29-29 tie with just nine seconds left, but Brady got Adam Vinatieri to a place where he could boot a game-winning field goal for the Patriots – something they’d done together just two years prior.

Despite Cincinnati QB Boomer Esiason being the reigning NFL MVP, the only Bengals touchdown in the game was on a 93-yard kickoff return by Stanford Jennings. Still, that was almost enough.

Joe Montana led arguably the greatest Super Bowl-winning drive in history. Starting at their own 8-yard line with 3:04 remaining, the 49ers smoothly moved the ball 92 yards in 12 plays, ending with a 10-yard Montana touchdown pass to John Taylor.

Jerry Rice covered 51 yards on 3 receptions, finishing with 11 catches for 215 yards and a touchdown.

With 18 seconds left in the first half and down by three points, the Cardinals were just a yard away from the end zone, poised to win the game or at least tie it with a field goal. Then James Harrison intercepted a Kurt Warner pass at the goal line, kept running, and 100 yards later, the Steelers were scoring. The phenomenal touchdown gave Pittsburgh a 17-7 lead and a major momentum change.

Kurt Warner — a Super Bowl hero once before — appeared to get the last laugh when he found Larry Fitzgerald for a 64-yard touchdown to give the Cardinals a 23-20 lead with just over three minutes left in the game.

Steelers QB Ben Roethlisberger responded with a nice-play drive that starred Santonio Holmes in what is likely the greatest performance by a receiver in a Super Bowl-winning drive. He made four catches for 73 yards in that final drive, including the winning touchdown.

He actually dropped what would have been the game-winner one play before, but made up for it with a beautiful catch that saw him stretch in the back corner of the end zone, just barely keeping his toes in-bounds while falling out of bounds. It was a picture-perfect play that gave the Steelers their sixth Super Bowl title.

The New England Patriots were moments away from completing only the second-ever undefeated season by an NFL champion, but the New York Giants dramatically denied them, leaving them with an 18-1 season.

There was already a preview of this Super Bowl in their regular-season finale matchup, an exciting game that proved to be a hint of things to come.

Tom Brady found Randy Moss for a short TD with 2:45 left to take a 14-10 lead for the Patriots. Shortly after, the game’s most memorable play happened.

The Giants faced a third and five situation at midfield with a minute remaining. Eli Manning impressively avoided danger and threw a pass to David Tyree 32 yards down the field. Tyree leapt, grasped the ball, then somehow kept it awkwardly pressed to his helmet in one of the most incredible and unlikely receptions in Super Bowl history — forever embedded in Super Bowl lore as the “helmet catch.”

Manning took the momentum from that play forward, connecting with Plaxico Burress with just 39 seconds left to clinch the upset victory.

The game was well played throughout, tightly contested, and had three lead changes in the fourth quarter. It was also a very cleanly played Super Bowl game, with each team avoiding significant penalties. Throw in the subplot of the potential undefeated season, which would’ve likely crowned the Patriots as the greatest single-season team of all time, and you have yourself a recipe for what could be the greatest Super Bowl ever played — even with so many worthy contenders.