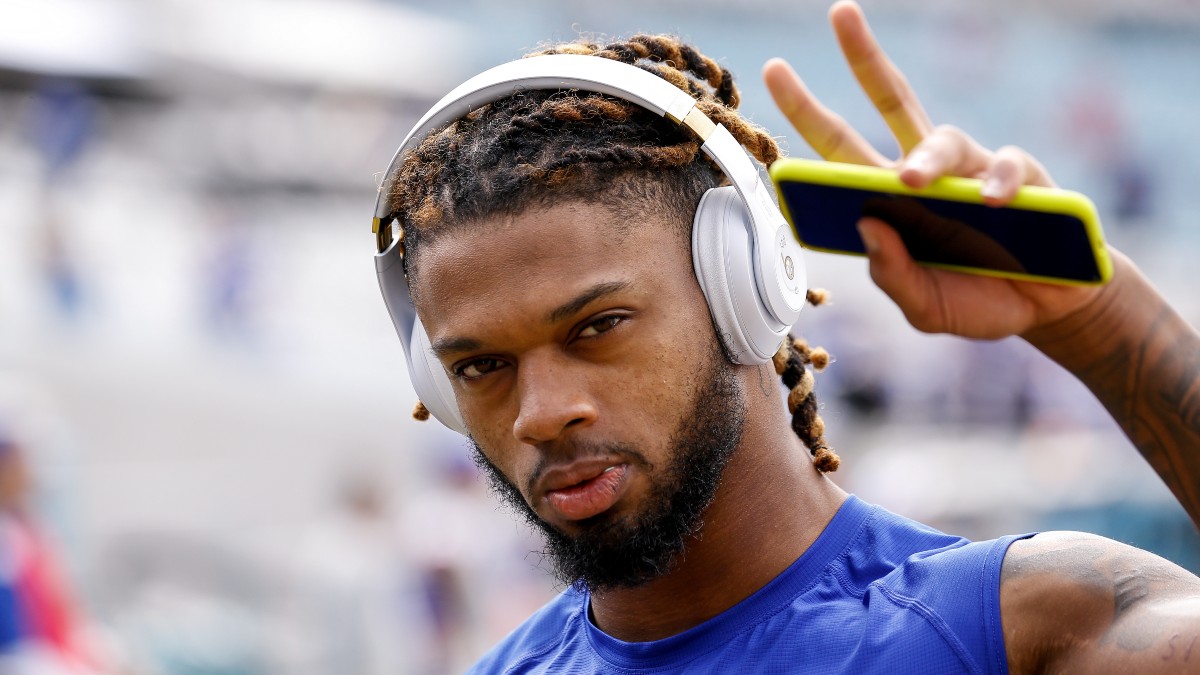 If you want to know the true definition of the word miraculous, one name comes to mind: Damar Hamlin. His incredible story of strength, determination, and perseverance inspires everyone from Bills fans to people who’ve never watched a game before, and his story is still being written.

After a tackle that left him fighting for his life, Bills’ safety Hamlin was in the prayers and hearts of people worldwide, and in less than a week, he’s not only woken up but has also started speaking and tweeting to connect with his adoring fans everywhere. So when the Bills prepared to take the field for their last game of the regular season, Hamlin was gearing up to wear the mantle of their biggest cheerleader ever — and their greatest inspiration.

Of course, Hamlin wants to be on the field with his team, but his heart and spirit are with everyone in the sports realm, especially within the NFL today. However, he knows healing is the name of the game right now and he can still be with his team — by lending them his unwavering support. After his recent near brush with death, he’s reminding everyone to tell their loved ones how special they are today and to share love everywhere they can.

He’s also rooting for his teammates with the same passion he channels to play football and that means the Bills couldn’t have asked for a better cheerleader for this game.

In what was absolutely a play for Hamlin, the Bills wowed fans with an opening kickoff return, and the energy in the crowd was almost tangible, even for fans watching at home. Hamlin saw the play and was rendered virtually speechless, a sentiment everyone watching shared.

If you were curious about the last time the Bills scored a touchdown off a kickoff, Hamlin says God has a hand in that storytelling. It’s been three years and three months, an ode to Hamlin’s number on the field. That’s more than just a coincidence; it’s a nod to the man we’ve all been rooting for as he cheers his team on to victory.

Hamlin even gave a nod to Bills quarterback Josh Allen who wore a crewneck and a hat with Hamlin’s number as he entered the stadium for the big game today.

Of course, the Cincinnati Bengals and the NFL as a whole also harbor big love for Hamlin, which was presented via a unique painted three on the field and ‘Love for Damar’ shirts that were proudly being sported before the game. Tee Higgins, the player involved in the tackle that caused the injury for Hamlin, was also seen in the shirt on the field. Hamlin retweeted Higgins’ shout-out with a heart and a salute emoji.

Across the NFL, Hamlin is being honored, showered with love, and remembered in prayers. No team is sharing more appreciation for the player than his home team, the Buffalo Bills. Ahead of the game tonight, Josh Allen led the team to the field with flags displaying Hamlin’s number and the phrase ‘Prayers for Hamlin’ — there wasn’t a dry eye in the stadium or homes across the sports realm. Meeting in the middle of the field, proudly throwing up three fingers, the team paid homage to their lucky player, biggest cheerleader, and inspiration.

We’re sending our love to Hamlin, who is teaching us a big lesson in camaraderie even though he is not present on the field with his team. Here’s to Hamlin, and no matter what team you’re rooting for this weekend, here’s to the Buffalo Bills!