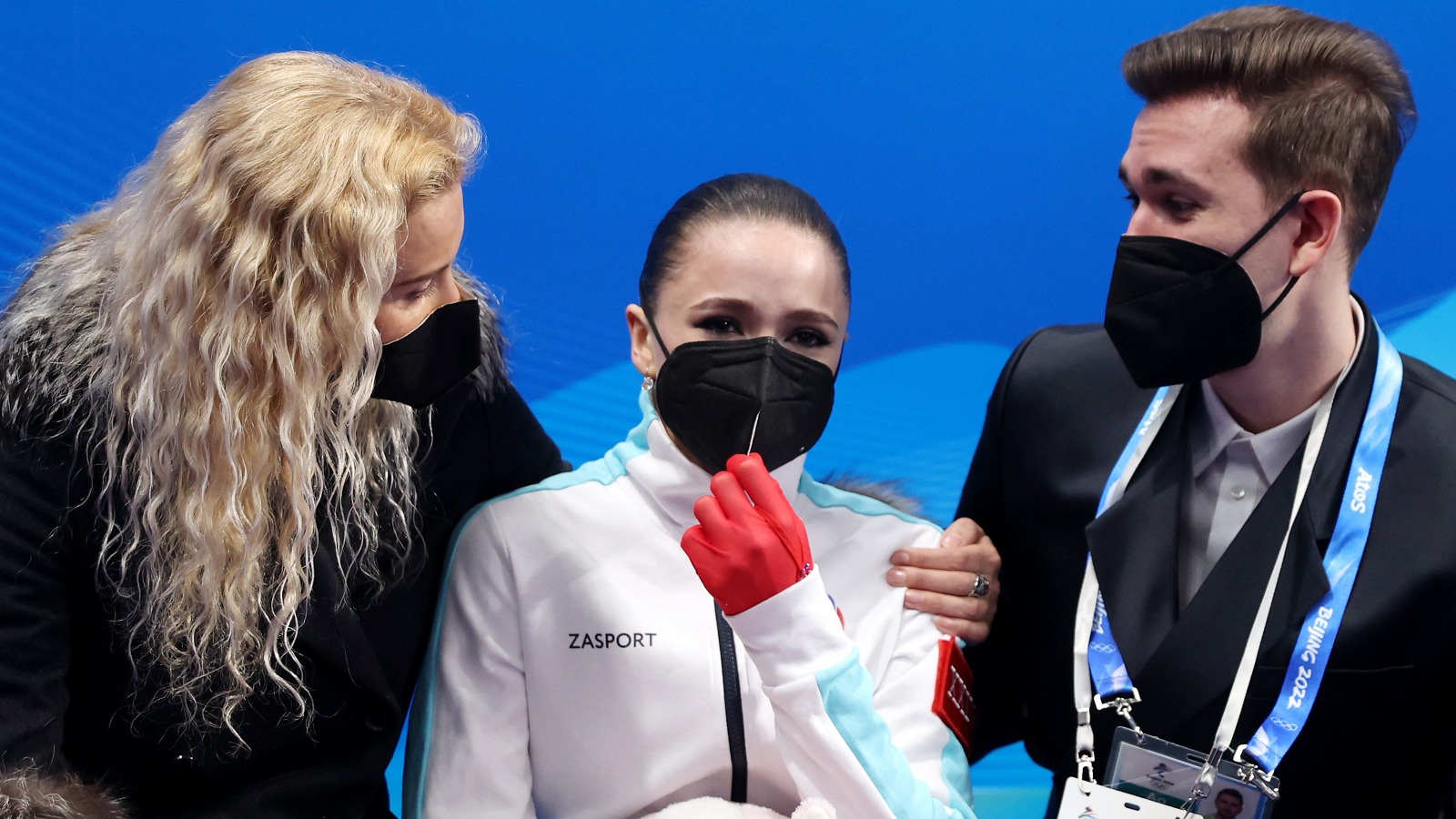 Teenage Russian figure skater Kamila Valieva was expected to steal the show at the 2022 Winter Olympics. And she did, but for the entirely wrong reasons.

The 15-year-old Valieva tested positive for a banned substance and gained a different type of spotlight during the Games that overshadowed her gold-medal winning performance, as well as large portions of the Olympics as a whole. And it shed a familiar spotlight on her homeland, Russia, which has been mired in an illegal doping scandal involving the Olympics.

Who, if anyone, was to blame? Did she take it knowingly? Did someone else give it to her? Is it all just a big mix-up? The full investigation, and possible fallout, are still to come.

On Feb. 6-7, Valieva competed in the women’s single skating short program, and her unbelievable performance helped her team win gold. The next day, the medal ceremony for the event was unusually postponed. Shortly thereafter, it was revealed that Valieva had failed a drug test, and the story unfolded from there.

The skater has claimed that she accidentally and unknowingly ingested the banned substance. Yet the world at large remains extremely skeptical.

The fallout that followed is still hazy, and the questions span a broad spectrum now, and into the future.

Russia leaves itself open to doubters

Starting up top, the Russian Olympic Committee (ROC), which Valieva skates under, has faced severe punishment and criticism for verified, widespread illegal doping.

Technically, the country of Russia is banned from this year’s Olympic Games as a result of a December 2019 ruling by the World Anti-Doping Agency, which proclaimed that Russia orchestrated and conducted a state-sponsored illegal doping scheme at the 2014 Games in Sochi.

However, Russian athletes were still allowed to participate as individuals under the ROC in the 2022 Games.

Which lands us back at the current games, where Valieva became the first woman to ever complete a quadruple jump at the Olympics — twice — helping Russia take gold in the team skating competition.

Shortly thereafter, the news that she had tested positive for the banned substance trimetazidine, which is a heart medication used to treat angina, came to light. It is said that the drug helps to increase blood flow to the heart and limits rapid swings in blood pressure, improving endurance and blood flow efficiency, according to a USA Today story.

The medal ceremony for the team skate competition never came, as it was delayed by the International Olympic Committee (IOC).

Usually, the positive test, which stemmed from testing on December 25, 2021, collected by the Russian Anti-Doping Agency at the 2022 Russian Figure Skating Championships in St. Petersburg, Russia, would have been known prior to the Olympics.

However, due to a backlog in the testing at a WADA-accredited Swedish lab, the result did not come to light until Feb. 8. The Russian Anti-Doping Agency cleared her on Feb. 9, but at that time both WADA and the ITA appealed the decision to the Court of Arbitration for Sport (CAS). Even though there was pressure from the IOC and the International Skating Union to dismiss her from the Games, “a panel of three CAS arbitrators denied the petition,” according to a story in The Ringer.

This ruling was only to address whether Valieva would be temporarily suspended, or be allowed to compete in the now-completed women’s single skating competition, and was not a ruling on whether she violated the anti-doping rules, according to the IOC in a story on Olympics.com.

According to the International Testing Agency, which is leading the anti-doping program for the 2022 Winter Games, since Valieva is a minor she is considered a “Protected Person” because she is under the age of 16. Thus, she “can be offered exemptions or leniency under The World Anti-Doping Code,” as reported by USA Today.

Furthermore, because she is a “Protected Person” the details would usually not be released or addressed by the ITA, but once the story started gaining steam they felt the need to address it.

“Seeing that some in the media did not grant her the same protection and have reported widely on the basis of unofficial information following the postponement of the medal ceremony of the figure skating Team Event at the Olympic Winter Games Beijing 2022, the ITA acknowledges the necessity for official information due to heightened public interest,” the ITA said in a release.

During the WADA hearing, Valieva stated that she accidentally took the banned substance because her grandfather used the medication regularly, the USA Today story reported. Yet, the skater’s test showed that she tested positive for two other medications — L-carnitine and Hypoxen — that are not banned. This led WADA to say that this undercut her argument that the trimetazidine was ingested in error.

In an interview with Eurosport, WADA chief Witold Banka said, “Speaking generally about the doping of children from my personal perspective and from WADA’s perspective is that its evil and unforgivable. I think that the people who are giving doping to children are killers of clean sport.”

“So the doctors, coaches and other support personnel who are found to have provided performance enhancing drugs to minors should definitely be banned for life.

“Personally I also think you should be imprisoned. Some countries in the world already criminalise the doping of children… I think this is very strong but a very good solution.

“Speaking about this particular case, we demand that RUSADA conducts a strong investigation into the entourage behind the athlete in this case. And WADA will also look into that and make sure a proper investigation is carried out.”

On Feb. 14, the IOC said it would not award medals for the team skate competition until there was a resolution on the matter, which means this story will likely leave the United States and Japan, which took silver and bronze respectively, without their medals until after the Games have already concluded.

It was further ruled that if Valieva were to medal during the individual short skating competition, there would not be a medal or flower ceremony during the Games.

Fallout for a very young performer

After wowing the world with her performance in the team skate competition, a visibly flustered and distraught Valieva tumbled during her performance and wound up in fourth place, rendering the medal ceremony decision moot.

Did Valieva take the banned substance knowingly? Was she given it by someone else and told that it was OK to take it, and it would help her compete?

During the NBC airing of the individual event, according to ESPN, NBC analyst and former Olympic gold medalist, Tara Lipinki said, “I don’t even know what to feel or what to think.You’re watching [Valieva] go through this pain — she’s 15. I blame the adults around her to even be put in this position — and all of the other athletes, what they’ve gone through this week. The possibility of there being no medal ceremony, or podium — that’s what every little girl dreams of when they think of the Olympics.”