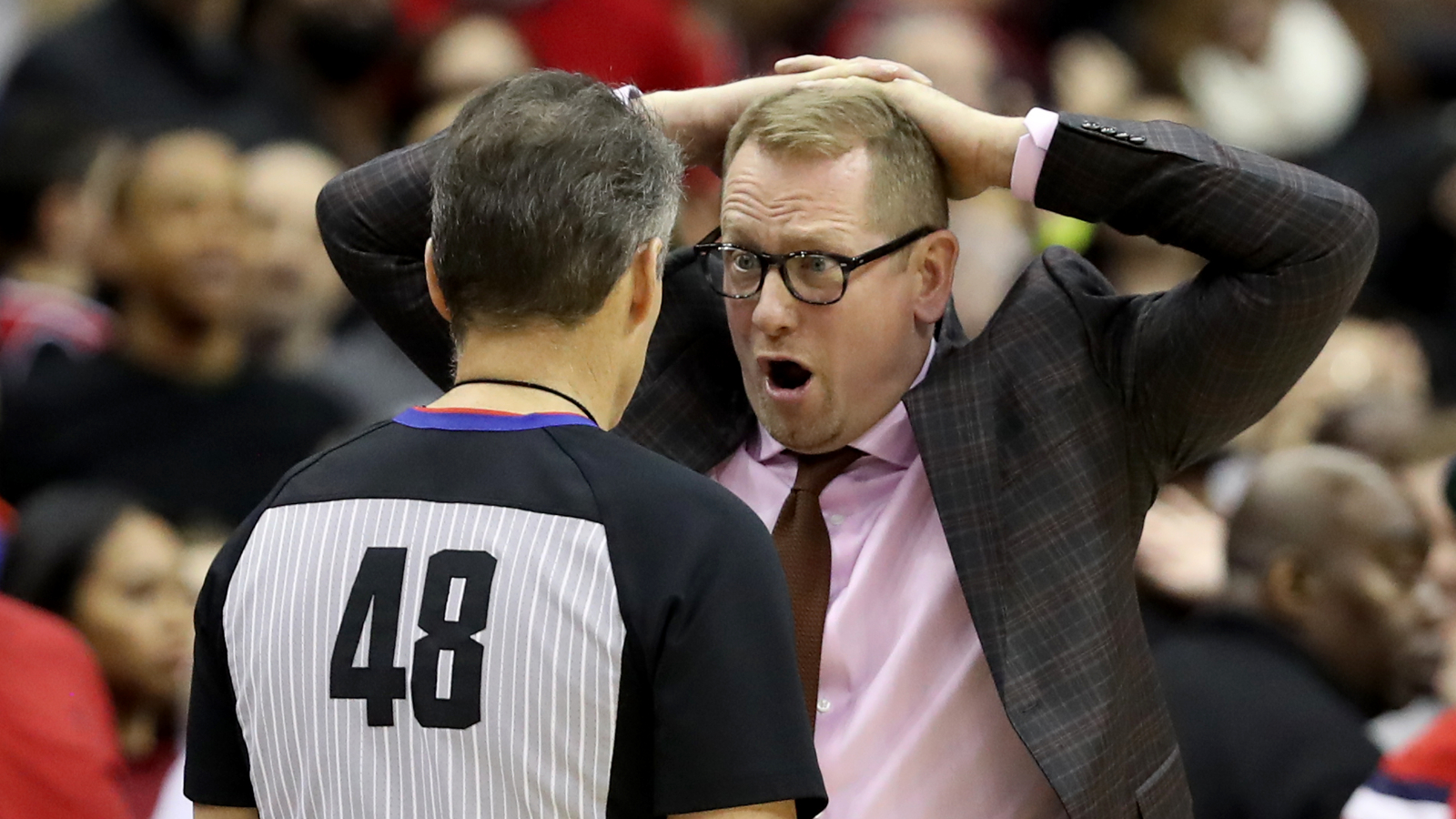 At the intersection of fandom and gambling sits extreme emotion, and often times that emotion is misdirected and aimed at officials and referees.

While players are meant to make mistakes and not perform at 100 percent, 100 percent of the time, people of all walks of life hold referees to another level, expecting them to be infallible and perfect in their assessment and execution of calling a sport.

That’s no different in the NBA, where fans (and even opinion writers and podcasters) like to surmise that referees are in on the fix whenever their favorite team loses or something doesn’t go how they expect it to go.

As a fan of more than 30 years now, I’ve often yelled at the TV or watched a replay with a raised eyebrow wondering what’s really going on there. Yet, in the back of my mind, I know that it is extremely, extremely difficult to correctly officiate a game full of humongous players moving at breakneck speeds.

Rather than upping the number of referees officiating a game — especially in the playoffs (hello NBA, have you considered this?) — the league has instituted more and more replay reviews, consultations with the league office, and started issuing a two-minute report that is meant to be transparent but really just throws officials under the bus by pointing out everything they did wrong in the last two minutes of a game, usually a very critical time in a close game.

There are only three refs to each game, so if we extrapolate it a little bit, we can guess that the NBA doesn’t try to put four, five, hell, even six refs on the court during a game because it would cost them more money.

Why not have three officials on each side of the court, so they don’t have to be running and in motion and trying to find the right angle and position to see what is happening?

Well, that brings up the question at the core there — just how much do NBA officials even make? What seems like a thankless job sometimes, is it really worth it?

For sure, the NBA or the NBA officials do not make that information public knowledge, because people like to get angry at other people who make a lot of money, especially in sports.

What do we (think we) know?

The National Basketball Referees Association (NBRA) goes into a collectively bargained agreement (CBA) with the league itself to determine a number of things, including pay.

“Whether it’s wages, working benefits or other issues, the NBRA helps ensure the referees are valued for their essential contributions to the game,” a statement on the NBRA website says.

Back in 2015, the two sides came to an agreement on a new, seven-year deal, meaning that following the current 2021-22 season, the agreement will come to an end and a new deal, or some extension thereof, will need to be reached and ratified.

We know at least that NBA referees aren’t paid something insulting or of sub-par value, because they have a very high-profile position, and if it were demeaning, more officials would walk away while quite the opposite is true, we see veteran referees sticking around for decades.

While some considerable time spent searching for the answer across the internet doesn’t turn up one hard-and-fast number that we can point to and say it’s factually correct, there are plenty of rabbit holes to hop down to try and figure this all out, so you don’t need to search further than this!

Let’s start with a trusted source rather than some of the, um, aggregating and clearly guessing sites out there. NBC Sports reported in 2021 that the starting salary for an NBA referee comes in above $100,000. Sadly, though, some of the references they use link to sites that don’t use any citations or references to prove their figures even a tiny bit, such as this one that doesn’t feature anything backing up the claim.

That doesn’t add up, at all

Another site they point to even declares, back in 2014 that is, that entry-level refs make $150,000 per year, according to information released by the league. Yet, that information is not linked to by them, nor shown where they got that number, only linking to yet again, another rabbit hole.

There is another figure out there clearly copied over and over again stating that these same refs make $600 per game to equal that $150,000 figure. Which means, either referees are calling 250 games per year (150,000/600 = 250) or someone (several someones) did their math wrong.

Here’s yet another listing that actually shows in graph form the salary of every NBA referee out there, but of course, there isn’t a lick of reference of where that information came from (once again, likely pulled from the info that’s out there that was never referenced, continuing the cycle. If I’m wrong, by all means I’ll admit it).

According to the NBRA, there are 75 referees who cover the 30 teams, equaling 120 preseason games and 1,260 regular season games, and no referee covers 250 games in one season. In fact, the most they do is 82, and not every referee does 82 games, meaning that the figures bandied about out there should be looked at with an ocean of salt, because that $600 per game figure is repeated, often.

And the widely-respected basketball-reference.com actually goes through and lists out every single referee since the 1988-89 season with how many total games they called, among other statistics, all there in its glory. The most games called by any one official was 67, so all those sites stating a figure of $600 per game would mean those officials are making $40,200 annually. We’re gonna go out a very short limb and say nope, that is not correct.

If people are staying in the gig that long, it has to be a well-paying gig.

What data do we have?

Let’s start by going way back to one figure we could find, reported by the Desert News newspaper out of Salt Lake City in 1995, citing an IRS investigation, in which the paper claims NBA referees make between $72,000 and $177,000 per year, working 70 to 75 games per year.

Bearing in mind that was 26 years ago, let’s just add normal inflation to those numbers first.

Chances are, salaries have not gone up linearly since 1995, especially considering the CBA, which would have refs and their representatives arguing for better quality of life and pointing out, as we did above, the rather stressful life conditions of being a full-time ref.

Even the figure we can dig up isn’t 100 percent verified, but it comes from trusted sources, albeit from more than 12 years ago.

During the 2009-10 season, the NBA locked out the NBA officials, meaning that after the two sides could not come to a deal on a new CBA, the NBA decided to instead choose replacement referees during the season until a new deal was reached.

The lockout came in September of 2009, nearly 13 years ago. With a bit of digging, you can find the one time that salaries of NBA refs were referenced to, and by the NBA no less.

During this time, the NBA, under the aptly named David Stern as commissioner, fought to keep ref salaries down and even said to the press that NBA referees made “nearly $150,000 per year for entry level referees and more than $550,000 annually for the most senior referees,” according to reporting from the Associated Press and then-Yahoo! Sports reporter Adrian Wojnarowski.

If you know Wojnarowski, now working for ESPN, and known belovedly as Woj (known to drop Woj-bombs on Twitter with breaking NBA news ahead of everyone else), then you know his word is to be trusted, and his reporting of this back in 2009 can at least be taken as valuable, even if those figures weren’t confirmed by the NBRA themselves.

Woj went on to release more information he obtained from an NBA report in that 2009 story.

“The NBA’s statement said the previous deal gave the referees retirement bonuses of up to $575,000, on top of pension benefits that could exceed $2 million,” he said.

In another September 2009 story by the Los Angeles Times’ Lisa Dillman, she quoted Rick Buchanan, The NBA’s executive vice president and general counsel from the same NBA statement as saying:

“The league noted that the previous CBA featured enhanced retirement bonuses of up to $575,000, on top of pension benefits that could exceed $2 million.”

The article also cited the $150,000 to $550,000 range for referees. Again, this is the range being quoted by multiple outlets when talking about today’s salaries, based on figures from over a decade ago.

What do we say then?

We say that all those articles out there citing this range are way off, because they are going off of numbers from 2009. Before the current CBA as we now have it was ratified in 2015. Six years ago!

The chief negotiator for the NBA refs back in 2009 was Lamell McMorris, who fought back against the league and Stern trying to reduce salaries and benefits at the time, as the refs rejected several offers from the league.

So, the likelihood that they’re making less than what they made in 2009 seems a bit ridiculous.

Going back in time one last time, longtime NBA reporter (working for ESPN at the time) Marc Stein said that “ESPN.com reported Aug. 25 that the league is seeking an across-the-board reduction of 10 percent to a referee budget that costs an estimated $32 million. In his statement Thursday, McMorris said that the referees have proposed a reduction to the budget of $2.5 million, which includes freezing salaries for the 2009-10 season in addition to reducing travel costs by 15 percent and per diem by 7 percent.”

Whatever the negotiated and agreed upon deal, we feel confident saying that NBA referee salaries are above $150K on the bottom end heading into the next round of negotiations when the deal expires after the 2022 season.

Let’s play our inflation game one more time! Keep in mind that the value of NBA teams has skyrocketed, NBA player salaries and the salary cap have done so as well. The NBA salary cap was $57,700,00 for the 2009-10 season. This year, it’s $112,414,000, more than double what it was. Sure, refs’ salaries don’t go up hand-in-hand with player salaries, but it clarifies the point that the NBA is making more money now than it ever has, and way more than it did in 2009.

And those numbers are before the bonuses that refs earn for every playoff game they call, which is understood to increase by round as only the top officials earn the right to call the most critical games, such as the NBA Finals.

And remember, just because someone speculates on some numbers somewhere, if they aren’t willing to cite their sources or at least point to a link where they got the verified (and not just further speculated) data from, you can probably blow the whistle and call foul.