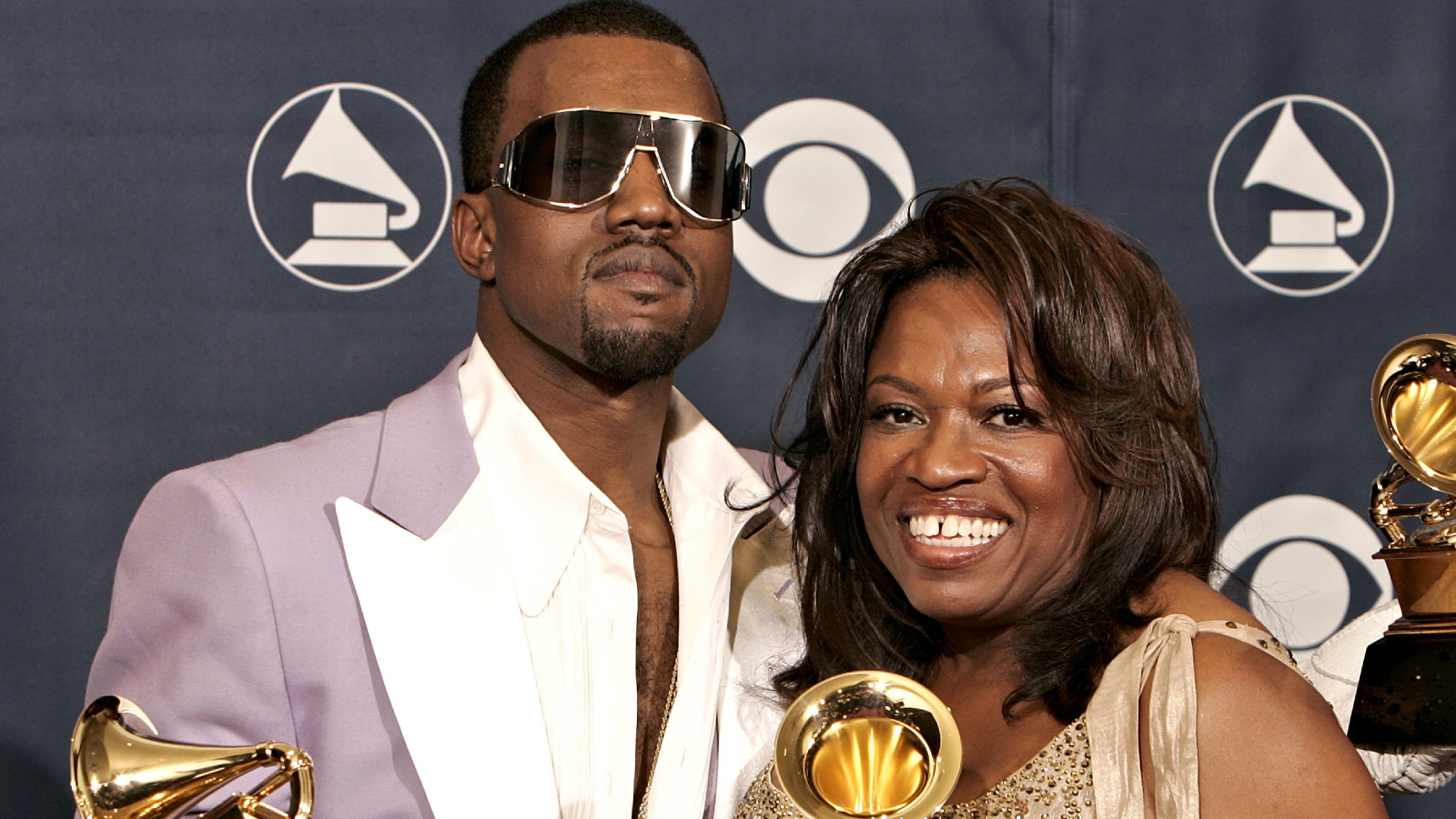 First, news about this project started to circulate via a podcast appearance by Aaron Donald. Then, an Instagram post from Jaylen Brown.

Finally, the Twitter account for West’s semi-new venture, Donda Sports, retweeted a series of posts that declared and confirmed his new sports agency had signed two verified stars to the brand — Brown, the Boston Celtics’ wing who is getting set to play in the NBA Finals against the Golden State Warriors, and Donald, the Los Angeles Rams’ Super Bowl-winning defensive lineman.

It has been confirmed by both athletes — Donald and Brown — via social media and reporting, as well as an official Tweet from Donda Sports, that they are the first two to join Ye’s agency.

With a website presenting a rotating logo, the date “06 01 22,” and just three clickable links for a few items of gear for sale in the shop, the terms and conditions, and an update box where you can enter your phone number, there’s still a shroud of mystery around Donda Sports.

The brand’s Instagram has been posting — very infrequently, since last fall — basketball videos, and branding messages, and promoting the Donda Doves, a basketball team from West’s Donda Academy school based out of Simi Valley, California.

Let’s roll out just what all this is, and means.

What (or rather, who) is Donda?

The album released by Kanye on August 29, 2021, is named after his mother, Donda West.

As you may know, Donda was a professor at Chicago State University for the English, communications, media, and theater departments, before retiring and joining Kanye in California to work with him. She sadly passed away in late 2007.

What is Donda Academy?

The school launched by Kanye is also in tribute to his late mother.

Their themes include “being a reflection of God’s glory in the world” as stated on the school’s website.

“Our project-based learning model allows students to guide instruction based on their interests and skills. We promote ideation, prototyping, and real-world implementation.

Donda students grow in their faith and community through daily all-school worship and celebration at Sunday Service,” the website says about the school and student experience.

It is set up for pre-K through 12th grade, with less than 12 students per class, and promotes that they have a 10:1 student to teacher ratio.

The admissions page states that June 10 is the deadline to apply for the 2022-23 school year, but the tuition-based school —which offers scholarships and financial aid according to the website — is also allowing applications for the 2023-24 and 2024-25 school years.

There is also an application page for the school choir, while the school’s basketball team has hosted multiple events, usually with the athletes wearing Kanye gear and with merchandise available for sale.

An interview by basketball magazine Slam done in March 2022 doubles as a promotional video for the school and team, as well as a bit of a hype video, too.

The team held a “Homecoming” game in Chicago, before a game in Los Angles that featured $500 courtside seats, with the team “clad in YEEZT 500s, Adidas YWWZY QNTMs, and Balenciaga-produced jerseys,” according to hypebeast.com, playing against the Veritas Prep school squad.

During the interviews, one of the athletes mentions the pressure involved with Kanye — along with several other famous people — being present for their games, but the overall demeanor of the team seems to be chill.

Their point guard, Robert Dillingham, is even ranked as a top recruit at his position by respected site 247sports.com, with several other players considered high-level Division I collegiate prospects.

What is Donda Sports?

Donda Sports is a branch of the Donda brand that we can imagine West and his partners have all sorts of ideas and plans for.

Currently, one of their two clients — Donald — is reportedly contemplating retirement, even as he is under contract with the Rams for 2022 with a salary of $14.25 million. More likely, even as he claims otherwise, Donald is looking for more money, as he is considered the best in the game at his position, but his salary falls outside of the top 100 highest in the NFL for 2022.

Though it’s an agency, it doesn’t appear that the two athletes are counting on Donda Sports to represent them in contract talks — it’s likely more for “off-the-field ventures” as was first reported by TMZ Sports.

While Brown has only acknowledged and mentioned the new partnership via social media, Donald actually spoke about the deal and the reasoning behind it on an episode of the podcast I Am Athlete hosted by former NFL players LeSean McCoy, Brandon Marshall, and Adam “Pacman” Jones.

Marshall asks the 31-year-old Donald why he joined, saying “that’s a legendary move” while referencing Kanye.

“For me it was a no-brainer, it was a hell of an opportunity to open up a lot of different, you know, things outside of football that I want to be involved in, that I want to do, that my wife wanted to do.”

Donald answers, mentioning that his wife handles most of his marketing and the deal was good for both of them.

The partnership isn’t short-term, according to Donald, as he referenced the homage to family, with the agency being named after Kanye’s mother, Donda.

“Donda Sports is something close to him, obviously, with his mother and everything. So he definitely wants this to be something that’s top tier and something he’s serious about.”

As for Brown, the 25-year-old already launched his own clothing line, called 7uice (Brown wears the number 7 for the Celtics), but it’s not clear if Donda Sports will take over or be a part of that venture as well, or if they’ll use each other’s brands to cross-promote and collaborate.

The Twitter account for Donda Sports, which just launched on June 1, has several retweets about the news of Donald and Brown signing with the agency, and just one Tweet of their own — a pinned Tweet welcoming both Brown and Donald “to the Donda Sports Family” with a dove emoji.

Both athletes are prominent, with Donald having just won a Super Bowl with the Rams and Defensive Player of the Year three times.

Further talking on the podcast, Donald said he isn’t returning to play for the Rams until he receives a new contract, while saying — as athletes are prone to do — “it ain’t about the money.”

“That’s what you’ve got to see. For me, it’s about winning. I don’t want to play football if I can’t win anyway,” Donald said. “If I got a real opportunity to win another Super Bowl, then it makes sense to play. But again, it’s still a business. We’ve got to handle the business side of things, and if that wasn’t to get handled then, you know, it is what it is type of situation. I’ll be fine regardless.”

As caught by ESPN’s SportsCenter via their Twitter account, Donald was in attendance at Game 7 of the Celtics Eastern Conference Finals series against the Miami Heat, in Miami, where he was wearing a green vest and shorts, possibly a prelude to friendship and partnerships between the two athletes as well.

It would be shocking if, after signing a deal with Donda Sports to promote himself even more, that he would retire and take himself out of the spotlight.

Playing at such a high level as Donald does means his name is out there, and if he’s trying to build his brand up even bigger, something tells us he’ll be playing again this year.

What more do we know about Donda Sports?

Before all that, though, Donda Sports put out a press release earlier this year, according to hollywoodunlocked.com, announcing the addition of former NFL wide receiver (and highly controversial figure) Antonio Brown to ‘bring an athlete’s perspective to all aspects of the organization.” You may recall that Brown also spent more than $2 million on a “Donda Suite” press box during this year’s Super Bowl in Los Angeles — as he announced on Instagram — while saying he is the President of Donda Sports. Brown was suspended for eight games in 2020 after sexual assault allegations, and has been in the headlines for the wrong reasons many times, including another suspension this past season for submitting what turned out to be a fake vaccination card.

As for Donda Sports, the Brown press release gave us the most information on the organization thus far.

“Donda Sports was founded with the vision of providing holistic support to athletes during and beyond their sport’s (SIC) career,” the statement said. “When the game is done Donda Sports is not done with you.”

The statement above is signed “-YE,” the name that West is now going by.

It goes on to say (in all caps, as is the whole release – all punctuation added by us):

“Donda Sports is a limitless organization centered on professional and wellness support in equal measure with the ambition to work with athletes across all genders, divisions, and sports. Donda Sports also encompasses athlete representation. A full serviced sports brand including apparel, sneakers, and much more.”

The release also reveals that along with Kanye, Justin Laboy is involved as a major part of Donda Sports. Laboy hosts an interview show called Respectfully Justin, and is known as a social media personality.

Keeping in mind, well, a whole hell of a lot of things, you gotta give it to those involved that they know how to promote and cross-promote something to get it out in the public eye and create buzz around it pretty quickly.