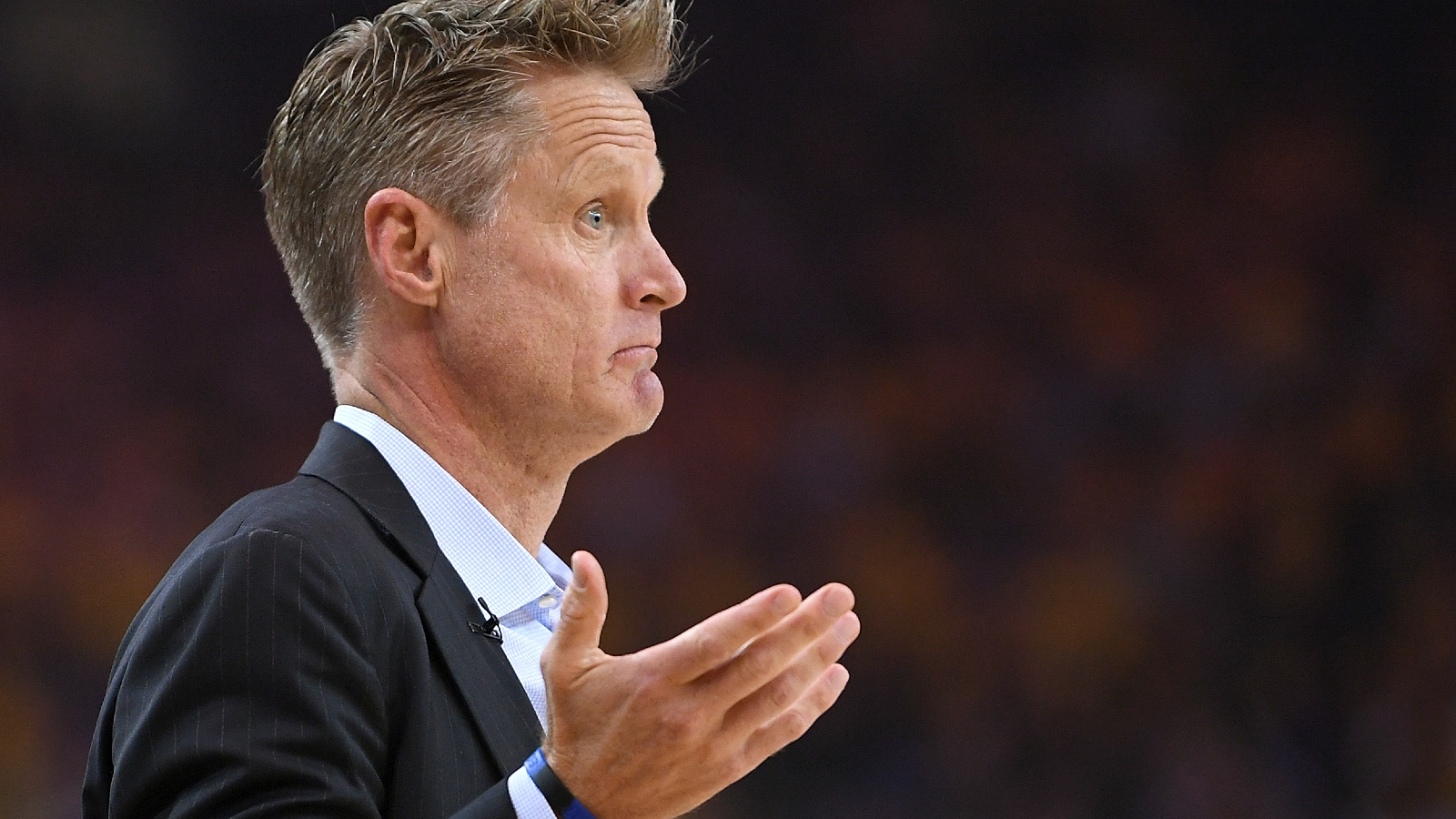 After being one of the top 3-point marksmen as a player in NBA history, Kerr also tried his hand as an NBA commentator, a general manager, and eventually, his current role as a head coach. Not many in the history of the league can say they tried, successfully, nearly every role there is for someone in the NBA to try.

The current Golden State Warriors lead man has his team in the NBA Finals once again, a place quite familiar for Kerr. After all, he won NBA titles as a player with multiple squads, notably hitting one of the biggest game-winners in NBA Finals history as a teammate alongside the notoriously lighthearted, just-playing-for-fun Michael Jordan (oh no, actually he was the exact opposite of that).

Through all his roles, here’s the history of the now 56-year-old Kerr’s victories in the NBA Finals.

Kerr joined the Bulls just after Jordan left, so his first couple years in Chicago lacked the usual fanfare and victory parades.

Once the league’s most celebrated player returned following his hiatus playing baseball, Jordan and the Bulls started another run of trips to the Finals.

Kerr played a key role on the winningest team in NBA history (at the time), with the Bulls going 72-10 en route to their championship win over Gary Payton, Shawn Kemp, and the Seattle Supersonics.

The league record stood for two decades until another team involving Kerr — the 2015-16 Warriors coached by Kerr — broke the record by going 73-9.

This was probably the year, and more precisely the game, that put Kerr on the map as an ice-in-his-veins legend that didn’t shy away from a challenge.

Already the winner of the 3-Point Contest during NBA All-Star Weekend earlier in the year, Kerr was the man Jordan and the Bulls trusted with the ball in his hands and a title on the line.

With just over five seconds left in the game and the Utah Jazz rightfully doing everything they could to get the ball out of Jordan’s hands, he found Kerr, who had worked himself open, and the guard rose up and swished through the go-ahead and eventual game-winning basket to give the Bulls back-to-back NBA titles.

Once again, Kerr and the Bulls met up with the Jazz in the NBA Finals, and once more, the story played out the same way with Chicago topping Utah in six games.

The run for Kerr and the Bulls’ third-straight title didn’t start out as neatly, though, and it was even a bit of role reversal that got Chicago on track and headed toward the series win.

After Utah won Game 1 of the Finals, Chicago was trailing the Jazz with less than one minute left to play in Game 2, on the verge of going down 2-0 in the series.

With the Bulls trailing 86-85, Kerr pulled-up for a 3-pointer but missed.

Not settling for disappointment or hanging his head like so many other would have, Kerr doggedly ran after the rebound and grabbed the ball amidst plenty of taller, stronger players, and fed a short pass to Jordan, who made a basket plus the foul to put the Bulls ahead for good as they tied the series at 1-1, setting the stage for them to regain momentum (around the 12:00 mark on the video above).

That made it three-for-three in trips to the NBA Finals and wins for Kerr and some of his other pretty famous Bulls’ teammates.

A year later and Chicago didn’t look like they’d win a fourth-straight title following the re-retirement of Jordan and the dynastic Bulls being broken up.

Technically, this was only 1999 as Kerr was traded from the Bulls to the San Antonio Spurs in January of that year, which gave him a second legendary head coach to learn under (Gregg Popovich in San Antonio, following Phil Jackson in Chicago).

So even though his former team wouldn’t win a fourth consecutive title, Kerr sure would.

After acquiring the sharpshooting guard, the Spurs went on to win their very first NBA title, defeating the New York Knicks 4-1 in the process, led by David Robinson and Tim Duncan.

Aside from the players on the 1960s Boston Celtics, Kerr became the second player in league history to win four consecutive championships, joining Frank Saul from the 1950s.

Kerr was traded once again, to the Portland Trailblazers, before the 2001-02 season, a time when the Los Angeles Lakers were winning three straight titles behind Kerr’s old coach, Jackson, leading Kobe Bryant and Shaquille O’Neal to wins.

Then, Kerr found his way back to San Antonio in another trade during the summer of 2002, and the Spurs went on to take their second title win in team history, again with Kerr on the squad.

San Antonio took down the New Jersey Nets 4-2 in the Finals. Though his playing time had diminished as Kerr was in his 14th season as a player, he still played a big part in that run to the finals as he made four 3-pointers in the clinching game of the Western Conference Finals against Dallas to help boost San Antonio to the league Finals.

Following that NBA Finals win, Kerr’s fifth as a player, he announced his retirement from the league after 910 regular season games, and an additional 128 games played in the playoffs.

Even in a league overrun with quality 3-point shooting now, Kerr’s mark of .454 for his career from long distance still stands as the NBA record. He also held the single-season record for 3-point shooting percentage at .524 in that title-winning 1994-95 campaign.

After stints as a broadcaster, GM, and even journalist writing for the now-defunct Grantland.com, Kerr got his first head coaching gig with the Golden State Warriors in 2014 and promptly won his first NBA title as coach the same year.

It had been four years since he stepped down as general manager of the Phoenix Suns, where he learned even more about strategy and approach from Suns coach Mike D’Antoni, who modeled the Seven-Seconds-or-Less principle while Kerr was there.

Clearly drawing from all he had learned in all facets of the game, Kerr empowered his players while holding them accountable, and also had a pretty handy set of shooters himself in Steph Curry and Klay Thompson, now widely considered the best shooting backcourt of all-time.

Not widely celebrated at the time, Kerr quickly proved himself by becoming the first coach to start his career with a 19-2 record as well as a 21-2 record. After becoming the winningest rookie head coach in history, going 67-15, Golden State went 16-5 in their title run, never going to a seventh game in four rounds as they beat the LeBron James-led Cleveland Cavaliers in the NBA Finals 4-2.

This was the year that everyone took notice of Kerr’s ability to think outside the box, and continue his streak of fearless decision making and execution.

First, he employed a now widely used tactic of not guarding a terrible shooter when he had his center, Andrew Bogut, leave Tony Allen wide open during the Warriors’ series defeat of the Memphis Grizzlies in the second round. The tactic threw off the Grizzlies entire game plan and approach, and left Allen, their best defender and a horrific shooter, mostly riding the bench.

Then, in the finals, trailing the Cavs 2-1, he upped the ante and thrust Andre Iguodala in to the starting lineup in lieu of Bogut, giving the league and the team a new look as they went “small-ball” with their heralded “Death Lineup” featuring no true centers, and Golden State promptly won the next three games.

A year after battling debilitating back issues throughout the season, as Kerr missed some time even as the Warriors ran to a league-record 73 wins, the Warriors were back in the NBA Finals once again with a new player in tow.

The year before, Golden State ran into some misfortune of its own doing in the Finals when Draymond Green got suspended for a game, knocking the team off its course and focus. This caused them to blow a 3 games to 1 lead, as the Cavs won the next three games and their first-ever NBA title.

But the Warriors came back in 2016-17. After signing Kevin Durant, Golden State absolutely demolished the league and went 16-1 in the playoffs, only losing one game to the same Cavs in the Finals in a 4-1 series.

With the “Hamptons Five” in full throttle, Kerr and the Warriors won the title running away once more, sweeping the Cavs this time in their record-setting fourth-straight meeting in the championships round.

Durant got his second Finals MVP award, and Golden State looked poised to rattle off a few more wins in a row under Kerr’s stewardship, but the team started to show cracks the following year and two extremely untimely and terrible injuries — an Achilles’ tendon for Durant and an ACL tear for Thompson — led to a loss in the Finals against the Toronto Raptors the next year.

After two seasons away from the big stage, Golden State and Kerr are back in the Finals once again, with a chance for Kerr to get his fourth ring as a coach. Kerr is tied for 14th all-time in rings won as a player, and he is sixth on the list of championships won as a head coach.

Overall, Kerr has eight NBA championship rings — five as a player, and three as a coach, and as the Warriors are favored in this year’s NBA Finals against the Boston Celtics, a ninth could be on the way.