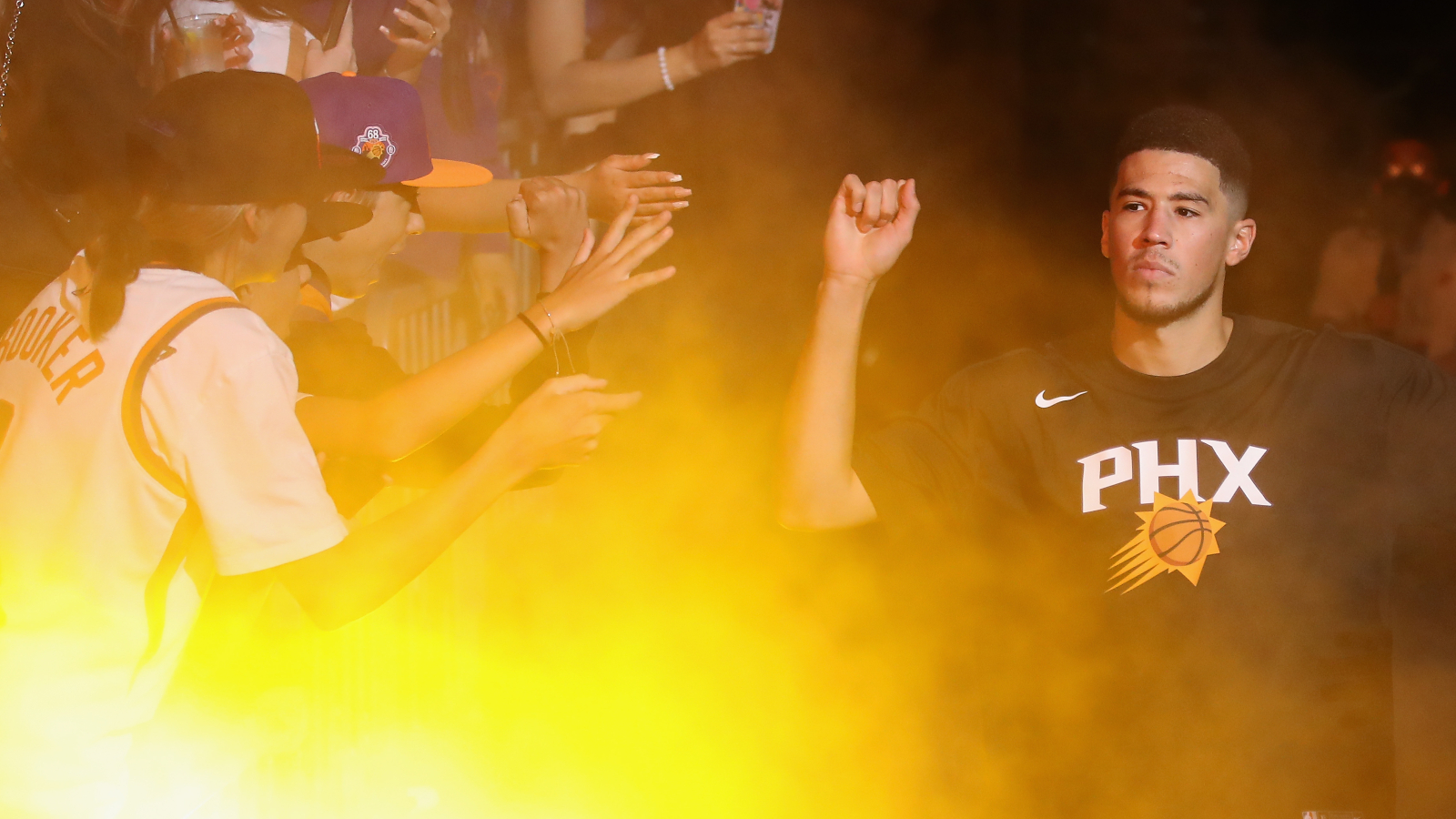 “The sun doesn’t go down. It’s just an illusion caused by the world spinning round”

Consider those lyrics a rallying cry for Phoenix Suns fans.

Although the squad from Arizona has been seemingly beaten in every fashion you can imagine and their fanbase has had their spirits beaten down year after year, decade after decade, the Suns seem to be on the verge of finally going supernova on the rest of the league and doing what they haven’t done in their 54 years of existence — win an NBA championship.

Though they sport arguably the NBA’s best color scheme, jerseys, and logo (that orange and purple, and later addition of black, is transcendent), and even perhaps the league’s best and most recognizable mascot — the Suns Gorilla — they’ve still never been able to officially call themselves the best.

As you may have known or at least know by now, Phoenix has never claimed the top prize in the NBA.

In fact, the Suns have only reached the championship round three times, so you could say they’ve gotten close to winning it all, but in each of those three instances — 1976, 1993, and just last year in 2021 — Phoenix lost in six games overall, only taking two wins themselves to lose each series 4-2.

The Suns and their fans have seen and felt it all

In spite of the (allegedly) historically cheap and reportedly racist owner, and despite facing insurmountable circumstances, Suns fans generally have a chipper demeanor, and are known for their intelligence and generally not being as ugly or violent or even demanding as some other home crowds.

This season, Phoenix had by-far the best regular season record, and sits on the precipice of reaching the Western Conference finals for a second-consecutive season with a real shot at not just a final berth, but actually winning the Larry O’Brien for the first time ever.

We don’t think many Suns fans would argue that their beloved franchise has been forlorn, but has it really been that bad?

Losing the big one

A triple-overtime thriller of a heartbreak to lose game five against the Celtics in ’76 paved the way for Boston’s win in game six.

After the home team took the win in each of the first four games, the Celtics and Suns fought back-and-forth for 48 minutes and then some, going all the way to three overtimes before a one-basket differential for the final tally, 128-126, going Boston’s way.

It’s cool but ultimately probably not that cool to those in Phoenix that this loss is considered by some to be the greatest NBA playoff game ever played.

This game might be too far back for casual fans to recall, but it was rife with controversy, including one regarding the clock — even though this game was, as we said, in Phoenix. It’s super rare that the home team is the one that gets screwed by the clock.

The other comes from the referees. Near the end of regulation with the score all tied up, Boston tried to call timeout but in actuality had no timeouts remaining. This normally triggers a technical foul and gives the other team a free-throw. However, a referee seemed to see the signal for timeout but just chose not to acknowledge it, perhaps knowing Boston had no timeouts left. That is not a decision for the ref to make, though, as the call should have been acknowledged and a free-throw awarded to Phoenix, which could have been the game-winning point and made all the difference in the Suns’ history.

Also, after a rebound by Paul Westphal (a future Suns head coach) with five seconds remaining, Phoenix signaled for and was granted a timeout. However, somehow the clock operator didn’t pause the clock for two more full seconds, and the Suns only had three seconds to try and pull off the game-winner. There was even a ruckus caused by the clock operator not correctly stopping the clock with two seconds left when Boston hit a go-ahead basket in the second overtime, and eventually order was restored and the Suns tied it up again (that’s another story in itself, too).

Charles Barkley won the MVP in his first season in the desert. Which in hindsight, maybe got that Jordan guy a little riled up and vengeful (if you know anything about him, or even watched The Last Dance, you know).

The Suns were rolling and looked like a formidable foe for the two-time defending champions. Kevin Johnson, Cedric Ceballos, “Thunder” Dan Majerle, A.C. Green, and Danny Ainge were all along for the ride to the finals, and Phoenix had the best regular season record to boot.

The Bulls won both of the first two games in Phoenix, immediately shifting the fates of the series.

Another triple-overtime thriller followed, with the Suns prevailing in game three before dropping game four to fall behind 3-1 in the series.

Phoenix got another road win in game five to keep the series alive.

Then John Paxson made a name for himself, and a legendary shot, much to the dismay, horror, and heartache of Suns fans everywhere.

The Suns were ahead by four in the final moments of the game before Jordan cut it to two, 98-96.

This is the moment that Ainge left Paxson wide-open — the same Paxson of 3-point contest-winning fame who only shot 64 percent on 3’s in the finals — and the Chicago guard obliged with the go-ahead score to make it 99-98 Chicago.

KJ’s attempt to win the game on the next possession was blocked by Horace Grant, and the Bulls had their three-peat.

Oh, and Jordan scored a still-finals-record 41 points per game.

With Chris Paul newly acquired in the offseason — flashes of ’92-’93 and the offseason trade for Barkley — hope was springing anew for the Suns fresh off a 8-0 run in the NBA bubble.

It all went right for the Suns until it all went wrong.

It’s maybe too fresh and too hurtful to beckon back to last year’s quasi-collapse. Phoenix had a 2-0 lead fall by the wayside in the 4-2 defeat to the Milwaukee Bucks.

Giannis Antetokounmpo did his best Shaq/Jordan imitation and dominated the latter four games, all wins by the Bucks.

Game five hung in the balance when Jrue Holiday stole the ball from Devin Booker, an uncharacteristic turnover in a crucial moment for the All-Star guard, leading to the game-clinching alley-oop to Antetokounmpo.

And in game six Antetokounmpo added to his lore with a 50-point game while somehow making 17 of 19 free-throws when he had shot just above 50 percent the rest of the playoffs.

The further ignominy came with Paul becoming the first-ever player to lose four playoff series in which his team led 2-0 before the defeat.

That brings us back to this season. Phoenix went 64-18 for the 2021-22 campaign, and thus far have been able to overcome some adversity — such as missing Booker for some time — to dismiss the upstart New Orleans Pelicans and, so far, holding Luka Dončić and the Mavs at bay.

Will the Suns be able to move on, where they will likely face the ever-daunting Steph Curry-led Golden State Warriors?

Or will this season be another illusion that has fans seeing visions of a Suns championship only to be left in the dark as the title rotates the other way?

The best worst of the rest

A not-so-short list of all the misfortune and even self-inflicted wounds the Suns have endured in their history, in no particular order at all:

The coin-flip to lose Lou Alcindor/Kareem Abdul-Jabbar to Milwaukee in 1969.

The hip check by one-time Sun Robert Horry in 2007.

The subsequent fallout suspensions of Boris Diaw and Stoudemire in the same series in 2007.

Michael Finley’s injury knocking him out of the playoffs after playing all 82 regular season games in 1996.

Kevin Duckworth of all people in 1990.

The heartbreak and missed chance of being ahead 3-2 in 1979, only for it to all go wrong.

Hakeem willing Houston to the comeback series win in 1994.

Trading Nash to the Dallas Mavericks during his first tenure.

Oh, and Sarver’s allegedly and reportedly abhorrent behavior over 17 years as the Suns owner (to say nothing of the cost-cutting) as detailed in an incredibly in-depth article by Baxter Holmes of ESPN at the outset of this season, back in the fall of 2021, which somehow has not derailed the season or team, even though it’s still being “investigated” by the NBA with no resolution or further details from them about anything.

Win or lose, this season will be a memorable one for the Suns and their fans, either for some bit of history repeating, or for them finally bursting through.