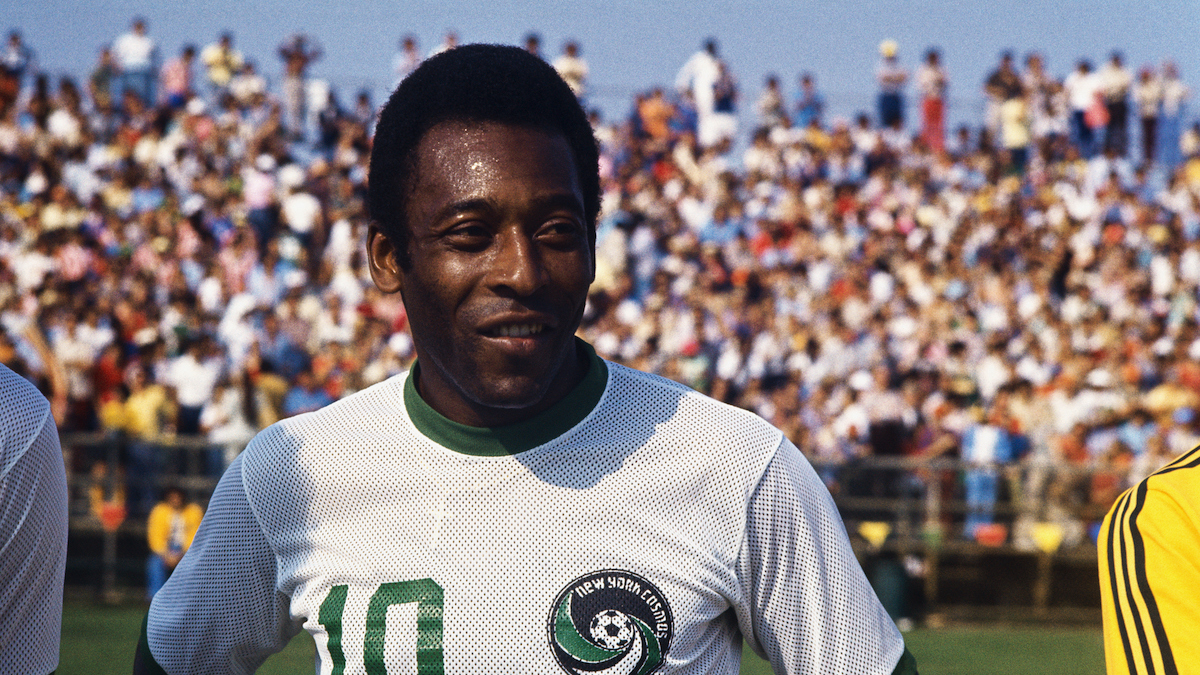 There is no man more synonymous with the world of soccer than Pelé. Not only is it easy to argue that he’s the greatest soccer player of all time, it’s also easy to argue that he was the best thing to ever happen to the sport. The world celebrated him for his athletic skill but revered him for his humanitarian efforts. Following the sad news of him passing away yesterday, many paid tribute to him on social media, including players, presidents, and celebrities.

Today, we celebrate his career with a countdown of his most memorable plays and performances.

Coming up with a list of his top ten greatest soccer moments is not easy, considering it forces us to leave out some of his best goals because he had so many. However, we chose to look at not just the extraordinary goals but also the important ones that may not be so extraordinary. We even have a game where he actually didn’t score a goal on our list and a couple of exhibitions games that were crucial to the sport and his career. To avoid only showing World Cup goals, we also made sure to sprinkle in moments from his days with club teams Santos and New York Cosmos as well.

Some famous plays that he was involved in that didn’t make our top ten include the near miss from midfield against Czechoslovakia, his incredible dummy against Uruguay, and his shot that forced “The Save of the Century” out of England’s Gordon Banks.

Here are our top ten greatest moments from the incredible career of Edson Arantes do Nascimento, better known as Pelé.

On Oct. 1, 1977, Pelé played his final game. It was an exhibition match between the only two clubs he had ever played for; Santos and the New York Cosmos. He closed out his illustrious career with a 3-year stint with the Cosmos from 1975-77 after playing 18 years for Santos. In the first half of the match, Pelé played for Santos who managed a 1-0 lead before he changed sides at halftime and scored the equalizer for the Cosmos off of a free kick. It was the last goal of his career. He was then taken out of the game for a standing ovation and a mid-field ceremony before the Cosmos scored the game winner.

With just 16 teams qualifying for the World Cup in 1970, the final qualifying games were even more intense than they are now. Brazil had just one game remaining and still hadn’t qualified. They needed at least a draw in their final match at home against Paraguay who would secure a spot in the World Cup in place of Brazil if they were to beat them. The importance of this match cannot be overstated.

Over an hour into the game, it was still tied at the Maracanã until, finally, Pelé booted a rebound into the back of the net to secure a 1-0 victory for Brazil and send them to the 1970 World Cup. The goal itself is anything but spectacular but it was a hugely important goal (as well as the most overlooked goal of his career) and Brazil went on to win the World Cup for the third time as the 1970 Brazilian team would become arguably the greatest single World Cup team in history.

8. Pelé wins championship in final year of his career

It was his third and final year with the Cosmos and it appeared that Pelé would not be able to deliver a title to New York. After all, the Cosmos didn’t make it to the playoffs in ’75 and lost to Tampa Bay early in the ’76 playoffs. It was also the final year of his soccer career. Then, things changed. The Cosmos pulled off playoff wins over Tampa Bay, Ft Lauderdale, and Rochester to earn a spot in the NASL championship game, known as the Soccer Bowl. The Cosmos won, defeating Seattle 2-1, and although Pelé didn’t score in the Soccer Bowl, he recorded 3 goals and 3 assists in the playoffs and fittingly went out as a champion.

This is the third and final entry in the countdown of Pelé’s time with the Cosmos, which is a period of time in his career that changed the reception of the sport in the United States and inspired kids in the nation to play soccer. It was no coincidence that the 1990 United States team that qualified for the World Cup — the first such U.S. team to do so in 40 years — was made up of ’70s kids who had watched Pelé on U.S. television.

The star was lured out of a brief retirement to play for New York with a $2.8 million contract that easily made him the world’s highest paid athlete. All eyes were on him in his anticipated return to the sport at Downing Stadium on Randall’s Island in New York City to watch the Cosmos’ exhibition match against the Dallas Tornadoes. In the 2nd half, with the Cosmos trailing 2-0, Pelé assisted on one goal and then scored the equalizer with a spectacular header, ending the contest with a 2-2 tie and a preview of spectacular things to come in New York.

When Santos played Vasco de Gama on Nov 19, 1969, fans packed the Maracanâ in heavy anticipation over the possibility of Pelé scoring the 1000th goal of his career. Courtesy of a penalty, Pelé didn’t disappoint and buried the penalty kick that sparked an unforgettable celebration.

Pelé was just 17 years old when he scored a hat trick over France in the 1958 World Cup semi-finals. His performance in the match is obviously one of the greatest ever and it quieted the numerous critics who laughed at Brazil for fielding a teenager in such an important tournament. Suddenly, the critics were no longer laughing. Pelé, as we now know him, had arrived.

3. The spectacular goal against Atletico Juventus in 1959 (footage re-created)

There is no actual footage of this famous play. The above video is an animated re-creation based on verbal and written accounts of the goal. There are many that claim that it was Pelé’s most incredible play and occurred when he was just 19 years old.

The 1970 World Cup may be the defining tournament of Pelé’s greatness when you consider the events leading up to it. Pelé had helped Brazil win their first-ever World Cup in 1958 and then Brazil repeated as champions in 1962 but was mostly without Pelé, who was injured after scoring in the opener. Then, in 1966, Pelé was injured again, roughed up by numerous intentional fouls as opponents realized it was the only way to stop the superstar. England went on to win the World Cup that year and Pelé, frustrated, retired from the national team. At this point, if he stayed retired from Brazil then his legacy would not be what it is today. Eventually, he changed his mind and helped Brazil qualify for the 1970 World Cup which, thanks to Pelé’s experience at the ’66 version, would introduce the idea of yellow and red cards.

Pelé had scored three goals in the group stage but saved his fourth goal for the final against Italy. His header that gave the Brazilians a 1-0 lead produced one of the most iconic images in World Cup history as Pelé leaped into the arms of Jairzinho. The goal set the stage for a 4-1 triumph with Pelé adding two perfect assists in the 2nd half as he became the first player, and so far still the only player, to win three World Cups in his career.

Coming off a hat trick in the World Cup semi-final over France, Pelé scored what some consider his greatest goal and most agree that it’s certainly his greatest World Cup goal. With Brazil leading 2-1 early in the 2nd half, Pelé scored his first of two goals in the final in spectacular fashion as he won the incoming ball in the box from one defender, kicked the ball over the head of another and then, after being kicked in the thigh by that defender, didn’t allow the ball to hit the ground as he booted it into the net for the goal.

He scored another in the 90th minute of a 5-2 victory. Despite scoring six goals in the tournament and winning the World Cup, it was only the beginning of the legend of the Pelé.