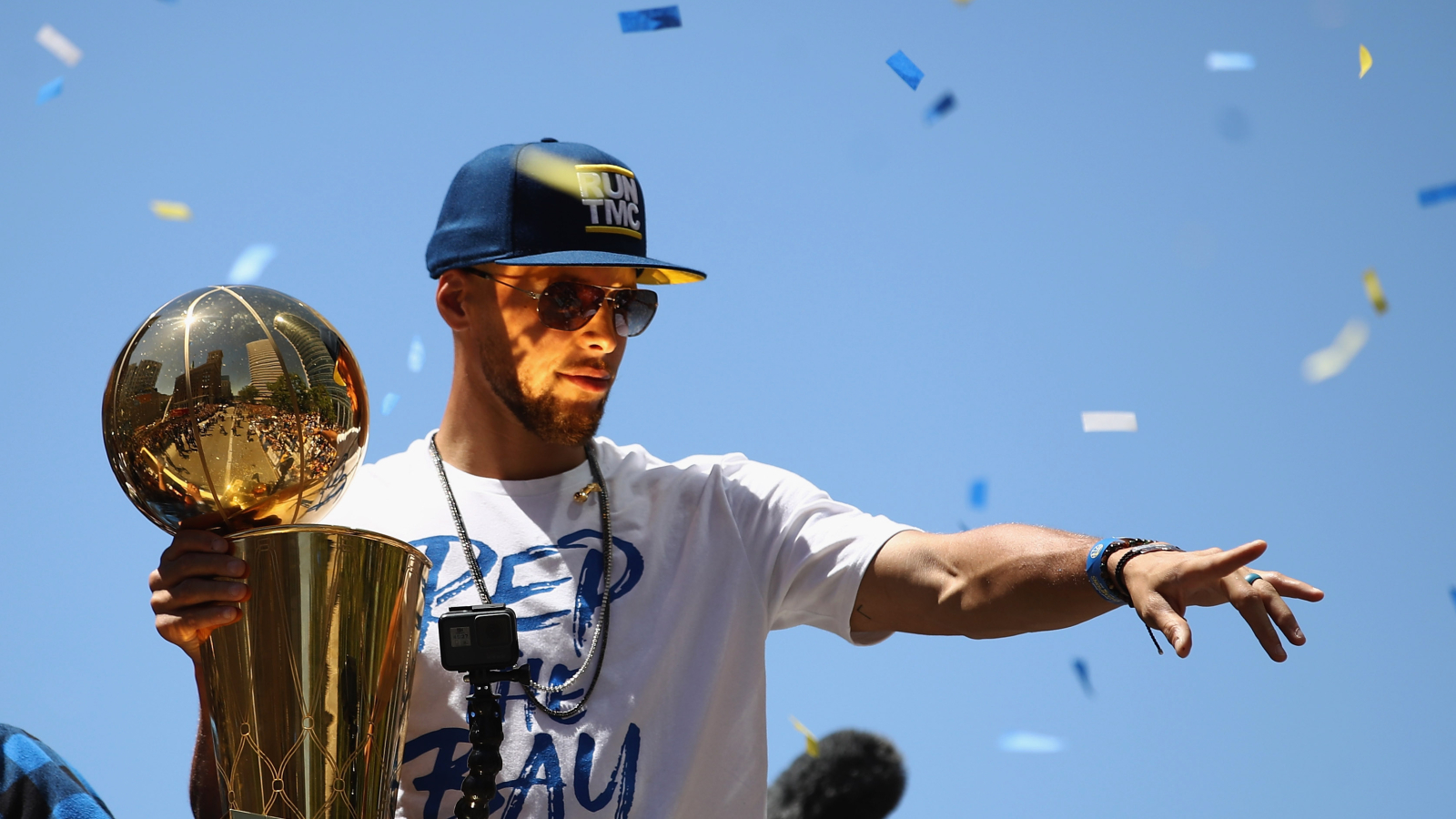 From lovable losers to up-and-comers, from joyful and celebrated to annoying to underdogs and back to the top again — the Golden State Warriors of the past decade have run the gamut.

Fans outside the Bay Area of Oakland and now San Francisco have felt a variety of ways about the Warriors during their ascendence, championships, stumbles, and rise again.

It started with rooting for a young Steph Curry as he changed the game entirely, then getting annoyed at their continued winning (and Draymond Green), then despising them as Kevin Durant joined them (and Draymond continued being Draymond), and now, kinda rooting for them once more after Klay Thompson’s devastating injuries and Durant’s departure.

It’s not too easy to keep track of what they did in which season as they’ve racked up runs to the NBA Finals, so let’s recap all of Golden State’s appearances, including those that came before the Splash Brothers (and this season’s Poole Party).

A staggering six appearances in eight years has come to fruition this year as the Warriors are back in the finals again after missing the playoffs entirely the past two seasons. Of course, it harkens back to when the Chicago Bulls made six NBA Finals in eight years, but the Bulls notably won in all six appearances and their two-year break was for a bit of a different reason — Michael Jordan going to play baseball. Like the Bulls, the Warriors lost an MVP player in Kevin Durant, but also racked up some injuries to key stars.

Yet here we are, with the current Golden State squad set to resume their dynasty, with the chance to win the golden trophy not just this year, but set up to extend their dynasty a lá the NFL’s New England Patriots. It’s perhaps very fitting that the Warriors will face the NBA team from the same area in the Finals — the Boston Celtics.

Maybe team owner Joe Lacob was right, as it pains a non-Warriors fan to say, and they are “light-years ahead” after all.

The long ago — Philadelphia Warriors

The club before they were the “Dubs” — the SF Warriors — made the finals twice, losing both times. That’s not why you’re here though.

Green (and Steph and Klay) and Gold, aka the Curry-Klay-Draymond-Kerr years

The Warriors played in San Francisco under their old name, then got renamed and moved to Oakland with the current-day name, and yet, now they’ve moved back to (cha-ching) San Francisco while maintaining the bigger-than-a-city Golden State name.

There was one title in 1974-75, but we’re here to talk about this recent dynastic run of success.

Four mainstays have been with the Warriors during their recent run of success, including the core trio and head coach Steve Kerr.

So far, the Warriors have won three and lost two, under greatly varying circumstances.

When Curry, Thompson, and Green were still NBA pups, and Kerr was in his first season as head coach, Golden State set the league and fandom alike on fire. Recall that plenty of people, including the players, believed former coach Mark Jackson was the right guy to lead them forward, and plenty of people doubted Kerr as a head coach, especially coming off his stint as general manager of the Phoenix Suns.

This run to a championship — with no hyperbole — changed the current game and the game to come as youngsters everywhere started to emulate Steph, and coaches looked to the way Warriors used 3’s, spacing, movement, and more 3’s, to their advantage. It all started with the first of two giant lineup moves for Kerr and the Warriors, putting Green in the starting five after David Lee was injured.

They went up against a very formidable but still undermanned squad in LeBron James’ return to Cleveland, with the Cavaliers pushing the series to six games before falling. It started with Cleveland taking a 2-1 lead in the series, though, before Kerr made his biggest move of the season, starting Andre Iguodala over center Andrew Bogut, fully pushing the renowned “Death Lineup” to the forefront as Golden State won the next three games and Iguodala was named Finals MVP.

The best regular-season team of all time (73-9 record) is celebrated slightly less than it could have been, all because it fell short on the big stage.

The rematch of Curry vs. LeBron, and this time Kerr vs. a different rookie coach, the Cavs’ Tyronn Lue who took over for the fired David Blatt, was a thrill for nearly all NBA fans.

Now that the Warriors had won one, the novelty of the team was starting to wear off, if only a little, and fans were ready to root for LeBron even after loathing him for his move to the Miami Heat (before returning to Cleveland).

Golden State was highly, highly favored to win their second-straight championship, but everyone loves an underdog.

They even held a 3-1 lead in the series and looked to be cruising to the title over Kyrie Irving, Kevin Love, and LeBron.

Then, Green punched LeBron in the nuts (really, that happened) in Game 4, got suspended for Game 5, and the Cavaliers, behind some brilliance from Lue, learned how they could beat the Warriors and did just that, becoming the first team to overcome a 3-1 deficit in the Finals to come back and win.

An incredible and incredibly historic season, both for the Warriors’ record, and for the Cavs winning their first-ever NBA title.

This is the year the tides turned against the Warriors from the outside, but on the inside, everything was fine, dandy, and gold again.

Considered one of the top three players in the NBA (along with foe LeBron and now-teammate Curry), Durant signed as a free agent with the Warriors, leaving a bad taste in the mouths of many fans and even former (and current) players, as the aforementioned, record-setting albeit Finals-losing team added a player of such high caliber.

As stated, Golden State didn’t care one iota about any of that and were happy to crush the league. Though they didn’t try to go for another regular season record, so dominant were those Warriors that they ran roughshod through the playoffs and beat the Cavs, again, 4-1 in the Finals, as the Death Lineup became The Hamptons Five, swapping out Harrison Barnes for Durant.

It also marked the first time in history that two teams played each other three consecutive years in the Finals.

Known as the Finals that pushed LeBron out of Cleveland yet again.

Leading up to it, the Warriors very nearly didn’t even make it to the title round again, as a revamped Houston Rockets squad pushed them to the brink with newly added Chris Paul joining James Harden’s squad. You may know this tale already, that Paul hit the go-ahead shot in Game 5 for a 3-2 series lead, only to injure his groin and miss Games 6 and 7.

Some consider the Rockets would-be champs had Paul not been injured, but then again, Golden State dispatched its nemesis from Houston time and time again, so they may have pulled it out anyway.

In the Finals, the Cavs actually had a shot for all of one game, Game 1 in fact, and had they won that one it could’ve all been different, too. But J.R. Smith had the biggest brainfart in the history of sports — he thought the Cavs were leading and tried to dribble out the clock — leading to a pleading, utterly baffled, and totally devastated LeBron to sulk and not be able to muster the will to overcome such a historic gaffe.

Cleveland lost that first game in overtime, and Golden State went on to win in a sweep as LeBron hightailed it to Los Angeles.

The year it all went wrong.

Green and Durant had a very televised and reported-on fight and falling out, as Durant was in his contract year and Green (and many others) did not believe he’d re-sign and stay in Golden State, while the other original three were not going anywhere, ever, in their minds, making Durant an outcast. And the already mercurial (even if subdued) Durant and his teammates seemed in a different place, even as they were on the verge of a third title win in as many years.

Then, Durant got hurt during the early rounds of the playoffs against their constant foe in the West, the Rockets, but the Warriors still won on.

It might be tough to recall now, but there was daily debate about when and whether KD would come back, and how serious his injury was.

He eventually returned, only to tear his Achilles’ tendon in Game 5 of the Finals.

And Thompson first missed time with a strained hamstring before he ruptured his ACL in Game 6 of the Finals.

And the Toronto Raptors, behind Kawhi Leonard and stalwart Kyle Lowry, went on to win the championship — their very first — in six games.

With a 3-2 record over the past eight years in the NBA Finals, Golden State can fulfill so many storylines.

It’s a return to the roots of the squad, and all the history-making what-ifs — a team which was a Green suspension away from winning back-to-back titles, or even maybe Durant never joining the team, or even LeBron never winning that one title (in four tries) in Cleveland, and maybe not leaving for LA (nah, that was happening).

What would the team have accomplished if Durant never joined? If Green was never suspended? If Durant and Thompson never got hurt? If Durant never left? Almost all answers leave Warriors fans feeling like a 6-0 (or even 8-0) record in the Finals was on the table, considering how the team has rebounded once again.

This year’s Warriors, even with all their respective accomplishments, feel like they have so much to prove. And not to anyone outside, but the internal burn to show the world that the original trio plus Kerr belongs up there with the best ever, and to prove that this won’t be their last run to the Finals, either.

With new parts in place, such as Jordan Poole, Jonathan Kuminga, Otto Porter, Moses Moody, and maybe most importantly, the once-outcast Andrew Wiggins, the Warriors are looking like title favorites as they prepare to face the Boston Celtics.

A win this year would redeem the Durant years for outsiders, and for insiders, it would be a huge payoff for Thompson working his way back from two life-altering injuries, Curry and Green fighting through injuries and losses, others questioning whether Kerr lost his touch (or ever even really had it), and also making a point that showed Durant needed Golden State way more than they needed him.

It would also set off fireworks for opponents hoping to make a run of their own, seeing in a fully illuminated sky that their chance at a title might still be years away if these Warriors can win like this, this year, with a multitude of young talent still ripening and ready to add to the championship mix.