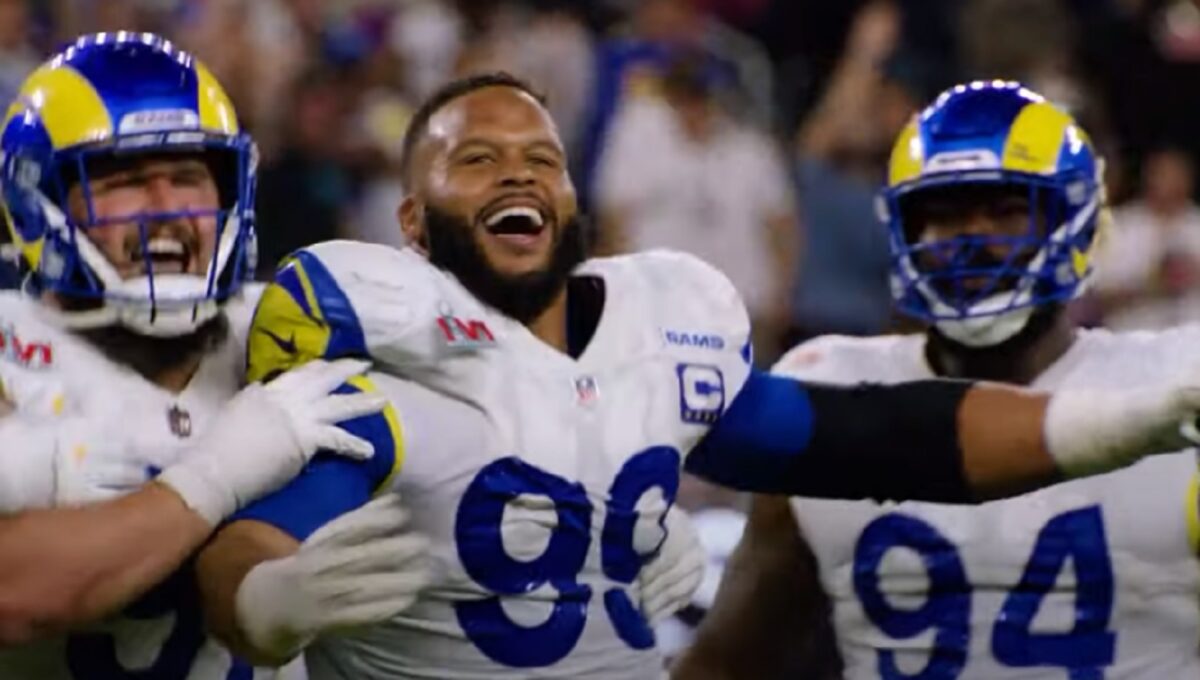 Just this week, the Los Angeles Rams happily paid up with their best defensive player, Aaron Donald by giving him a lucrative raise over the last three years of his contract with the team.

The three-time Defensive Player of the Year cashed in with a re-worked contract extension that will pay him a whopping $31.7 million per season going forward. These new terms make him the highest-paid NFL player – who doesn’t play the position of quarterback — in league history.

This isn’t a bad raise for Donald to get – considering he was a key factor in his team winning Super Bowl LVI this past February. He plays as a defensive tackle and made the final play on Bengals quarterback Joe Burrow to seal the championship win for his Rams. And to boot, there were even rumors that he was going to retire from the sport, having just reached the pinnacle of his career.

So much for not giving up his day job.

Donald’s not the only one who’s been getting seriously paid these days. Here are the rest of the highest-paid non-quarterbacks in NFL history, in order from biggest yearly salary on down.

Tyreek Hill got seriously paid earlier this year as he took his talents to South Beach. In the process of leaving his usual digs of the midwest — playing for the Kansas City Chiefs to be exact — Hill was surprisingly traded to the Miami Dolphins. And with that signing, he got a massive contract deal almost as fast as he can run a 40-yard dash.

Hill’s deal is worth $30 million per year over four years. This includes $72.2 million guaranteed over the course of the contract. That’s a lot of money, especially considering the projected $50.1 million salary-cap hit that the Dolphins will take in 2026.

This past season, defensive superstar T.J. Watt was arguably the best player on the team. In fact, some would say that he’s been the best player overall for the last few years. Just before this past season even started, he was deservedly rewarded for his efforts by the Steelers franchise with a four-year deal worth over $112 million. That calculates out to $28.2 million per year.

At that time, he was both the highest-paid defender and the highest-paid player that wasn’t a quarterback. Of course, that was before Hill’s and Donald’s respective deals. Not bad for this past season’s NFL Defensive Player of the Year.

In another surprise move during the 2022 off-season, former Green Bay Packers wide receiver Davante Adams joined the Raiders and earned himself a big payday without playing a single down in the classic silver and black. It’s no matter though because, with a player of his caliber, Adams is worth every dollar. Last season, he was named to his fifth-straight Pro Bowl and was an All-Pro for the second year in a row.

When he put pen to paper, Adams was signed to a five-year, $141.25 million contract, worth $28.25 million per season. The deal is the second-richest contract for a wide receiver, behind Tyreek Hill’s contract with Miami.

Sticking with great players who catch footballs for a living, the Cardinals’ best receiver is getting paid pretty well, down in the desert. Hopkins left the team that drafted him, the Houston Texans, for better opportunities in Arizona with a generous five-year deal.

The deal included a two-year extension and even though there’s not much to be made over the first few years, he’ll be paid $27.25 million over the course of those two extra years. The extension that was signed in 2020, at the time, made Hopkins the highest-paid wide receiver in the league.

At one time, the Chargers’ best defender was also the league’s highest-paid defender when he signed a five-year deal with L.A. prior to the 2020 regular season. That contract totaled up to $135 million, giving him $27 million per year. At the time, it was a record-breaking deal for a defensive end.

Right now, Bosa is in his mid-twenties and has been showing season after season that he could be the best defender in the league, in little to no time. He was the 2016 NFL Defensive Rookie of the Year and a four-time Pro Bowler. If his performance on the field continues the way it has been throughout his career, it should be no surprise that he’ll end up with a new deal in the future that will eclipse Aaron Donald’s recent contract.

This defensive end is certainly getting paid what he’s worth during his time with the Browns. Just like Bosa, Garrett signed a five-year deal heading into the 2020 season but it was worth a little less dough. This deal gives Garrett $125 million over the length of the contract for a nice $25 million per year.

Going into his upcoming sixth season, Garrett has been to three Pro Bowls and is also a three-time NFL All-Pro. And also like Bosa, the sky’s the limit for the 26-year-old defender, giving him the potential for perhaps a record-breaking payday of his own someday.

Brown is one of the top wide receivers in the league and is only getting better, which is why the Eagles gave him a four-year extension after trading for him with his former team — the Tennessee Titans — this past April. The terms of the extension were a nice round $100 million for $25 million per year.

After being drafted by the Titans in 2019, Brown made his first of hopefully more Pro Bowls in 2020. They certainly believe he has the potential to go even farther with his new deal and who knows? His yearly salary could one day follow suit.

Another top-level wide receiver on this list is from the Super Bowl-contending Buffalo Bills. Stefon Diggs recently cashed in with a four-year contract of his own but not quite for the $100 million that Brown got in Philly. Diggs’ deal pays him $96 million in total, $24 million per year, to be specific.

He’s certainly worth it, as he’s undoubtedly MVP candidate Josh Allen’s favorite target in Buffalo. Diggs was an All-Pro back in 2020 and just made his second-straight Pro Bowl last season.

So, defense must also be the name of the game here as another intimidating force on that side of the ball ranks high on this list. Back in 2018, Mack signed a six-year deal with the Chicago Bears for $141 million or $23.5 per year, making him at that time – you guessed it, the highest-paid defender in National Football League history. He has since been traded to the L.A. Chargers this past March.

This guy went to six consecutive Pro Bowls during his eight previous seasons in the NFL. At 31, the former Defensive Player of the Year and four-time All-Pro linebacker might not get another contract with these kinds of terms but you can’t deny how impressive his bank account has been for the duration of his current deal.