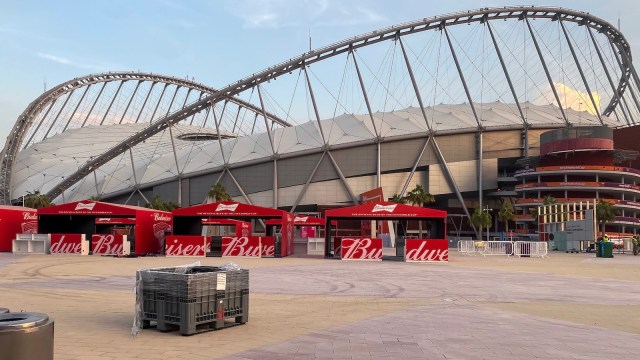 In a major blow to every imbibing soccer fan the world over, Qatar, the host of this year’s World Cup championship has banned alcohol sales in all of the event stadiums. The eleventh-hour unprecedented decision occurred after late negotiations between Qatar’s government and soccer’s international governing body FIFA.

The ban is the result of pressure from the country’s rulers, including its monarch – Emir Tamim bin Hamad. Qatar is a semi-constitutional monarchy but the broad sweep of powers enjoyed makes it a practical absolute monarchy. Under Qatari law, which is based upon Islamic Sharia law, alcohol consumption is prohibited and subject to punishments including flogging. In the past, the World Cup has been hosted by other majority Muslim nations but alcohol has been allowed to be sold to and consumed by spectators under special provisions. Qatar, however, has refused to make such provisions.

FIFA has stated: “Following discussions between host country authorities and FIFA, a decision has been made to focus the sale of alcoholic beverages on the FIFA Fan Festival, other fan destinations, and licensed venues, removing the sales points of beer from Qatar’s FIFA World Cup 2022 stadium perimeters.”

The news has come as a shock to many given that the planned agreement between the organizers and Qatar would give Budweiser — one of the World Cup’s biggest sponsors — permission to sell beer in the stadiums. This will no longer be the case — although the company’s alcohol-free brand, Bud Zero will still be available at the venues. In addition, fans can still imbibe at FIFA’s official fan festival and at literally hundreds of hotels in and around the capital city of Doha.

Qatari government officials began pushing back against the previous agreement last week. The original provision would have allowed beer sales at the stadiums and around the perimeter of the arenas (though not in the concourses). Qatari officials first asked that outdoor beer tents be moved to less visible locations. That was followed by the outright ban of beer sales at all stadiums.

The ban will certainly affect the relationship between FIFA and Budweiser and its parent company AB In-Bev. “Well, this is awkward…” Budweiser Tweeted from its official account after the ban was announced (the tweet has since been deleted). In a statement to Yahoo! Sports, an AB In-Bev spokesperson said, “some of the planned stadium activations cannot move forward due to circumstances beyond our control.”

The last-minute decision is worrying to many, not because of the lack of alcohol but because of the eleventh-hour nature of the decision which has led some to be concerned that the country may abandon other provisions made in order to host the games, particularly Qatar’s promise that members of the LGBTQ community will be able to feel safe at the World Cup despite the fact that homosexuality is forbidden by Qatari law and punishable by death. The country is regularly ranked as one of the most dangerous places for LGBTQ travelers.

“It could be potentially very dangerous, or it could be absolutely fine — you won’t know until you go,” Len Lanzi, a gay Los Angeleno soccer fan told Yahoo! Sports. “I typically will take a risk, but this one is so much in your face.”