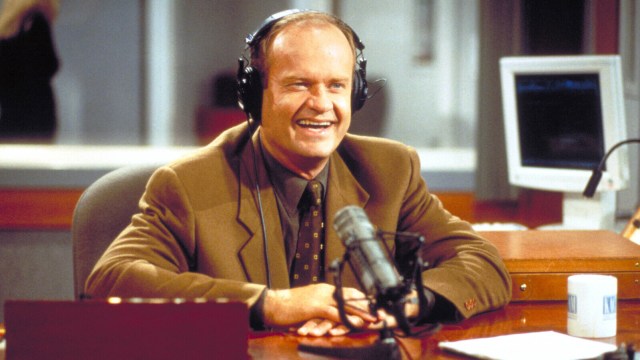 Running for eleven years from 1993-2004 — one more than Friends — Frasier stands as one of the most successful sitcoms of all time. Plus, as an off-shoot of the equally long-lived Cheers, there’s a strong case to be made for it being the finest spinoff show of all time, too. Even 18 years after its conclusion, the series still hasn’t been forgotten, with Kelsey Grammer in the middle of working on a revival for Paramount Plus.

So with more of Seattle’s most muddled therapist on the way, now is the perfect time to remember just what made Frasier such a television juggernaut in the first place. Although it has a reputation as the thinking person’s sitcom, thanks to its pretentious protagonist’s love of opera, art, and other forms of high culture, Frasier‘s real smarts lie in its winning blend of witty wordplay, timeless physical humor, and loveable, well-rounded characters who evolve across the show’s lengthy lifespan.

With a whopping 264 episodes to choose from, it’s naturally tricky to shrink the shrink’s finest hours down to just ten, but that’s what we’ve gone and done. With commiserations to those that narrowly missed out on a placement — including season four’s “Mixed Doubles”, season 11’s “The Doctor Is Out”, and season six’s “Merry Christmas, Mrs. Moskowitz” — here are the 10 best episodes of Frasier.

Otherwise known as “the one with the restaurant.” Frasier and Niles had many failed attempts at collaborating on some project or other across the show’s run but by far their most ambitious, and disastrous, was this legendary season two episode in which the Crane boys attempt to launch their own restaurant. Unfortunately for them, everything that can go wrong does just that on their big opening night.

This unusually structured episode encompasses three different storylines set on Valentine’s Day. While Frasier’s attempts to find out if he’s at a meeting or on a date with a lady friend and Daphne and Martin’s awkward dinner are entertaining, it’s the episode’s opening salvo that makes it a classic. This peerless piece of silent physical comedy sees David Hyde Pierce pull off his best Mr. Bean impression.

For the show’s first two years, Niles’ infatuation for Daphne was only played as a pathetic schoolboy crush but in this game-changing season three episode we start to see real feelings develop between them for the first time, as Daphne teaches Niles how to dance in advance of a swanky charity ball. Niles’ smug grin and “I hope you all saw that” eyebrow-raise when he and Daphne kiss for the first time is priceless.

Frasier‘s final season isn’t its best, but they really stuck the landing with the last ever episode which unsurprisingly packs a real emotional wallop as we say goodbye to the Crane family after 11 years. Frasier makes the leap to leave Seattle behind, just as Martin gets married again and Niles and Daphne have their first child. The reboot needs to be worth it to undo this flawless happy ending.

Many of Frasier‘s best episodes were able to take a simple seed of a joke and grow a mighty comedy oak out of it. Case in point, this season four favorite which sees Frasier and friends record a murder mystery radio play live on air. Much like “The Innkeepers”, the beauty is in watching all the dominoes, as neatly set up earlier in the episode, come tumbling down around our well-meaning-but-doomed hero.

While season one is an incredibly robust first inning for the series, it arguably took until this early season two episode for Frasier to have its real first classic. In this one, Frasier sets his handsome and cultured new boss Tom up with Daphne — unaware that Tom is gay and thinks he’s on a date with Frasier himself. Double intendres abound in this episode that’s managed to age extremely well.

As seen in the previously mentioned finale, as Frasier got older it gained the confidence to occasionally pause the comedy to pull on our heartstrings. The boldest episode has to be this underrated season 10 entry which sees Niles go under the knife for heart surgery, leaving his loved ones with nothing to do but wait. It’s not one you’ll stick on to cheer yourself up, but it’s a powerful half-hour nonetheless.

Niles and Daphne truly took over the show in season seven, which focused on the love square between the duo and their respective partners. And it all came to a head in the finale which saw Niles finally declare his feelings for the eccentric Englishwoman. While the show may have lost its momentum once the pair got together, this episode was the perfect culmination of their seven-year road to romance.

But long before Niles and Daphne actually got together we had this side-splitting season four opener, in which Daphne employs Niles to play her husband after an old boyfriend looking to win her back arrives in town. The lies only get more convoluted from there as Frasier pretends to be married to Maris, Roz pretends to be Maris, and, just for the hell of it, Martin pretends he’s an astronaut.

From one quintessential Frasier farce to another. While “The Two Mrs. Cranes” is confined to Frasier’s apartment, this episode relocates the gang to, well, a ski lodge, where luuurve is in the air. While Niles pines for Daphne, Daphne pines for French skiing instructor Guy… who pines for Niles. As does Daphne’s friend, Annie. Meanwhile, Frasier’s obliviously caught in the middle of it.