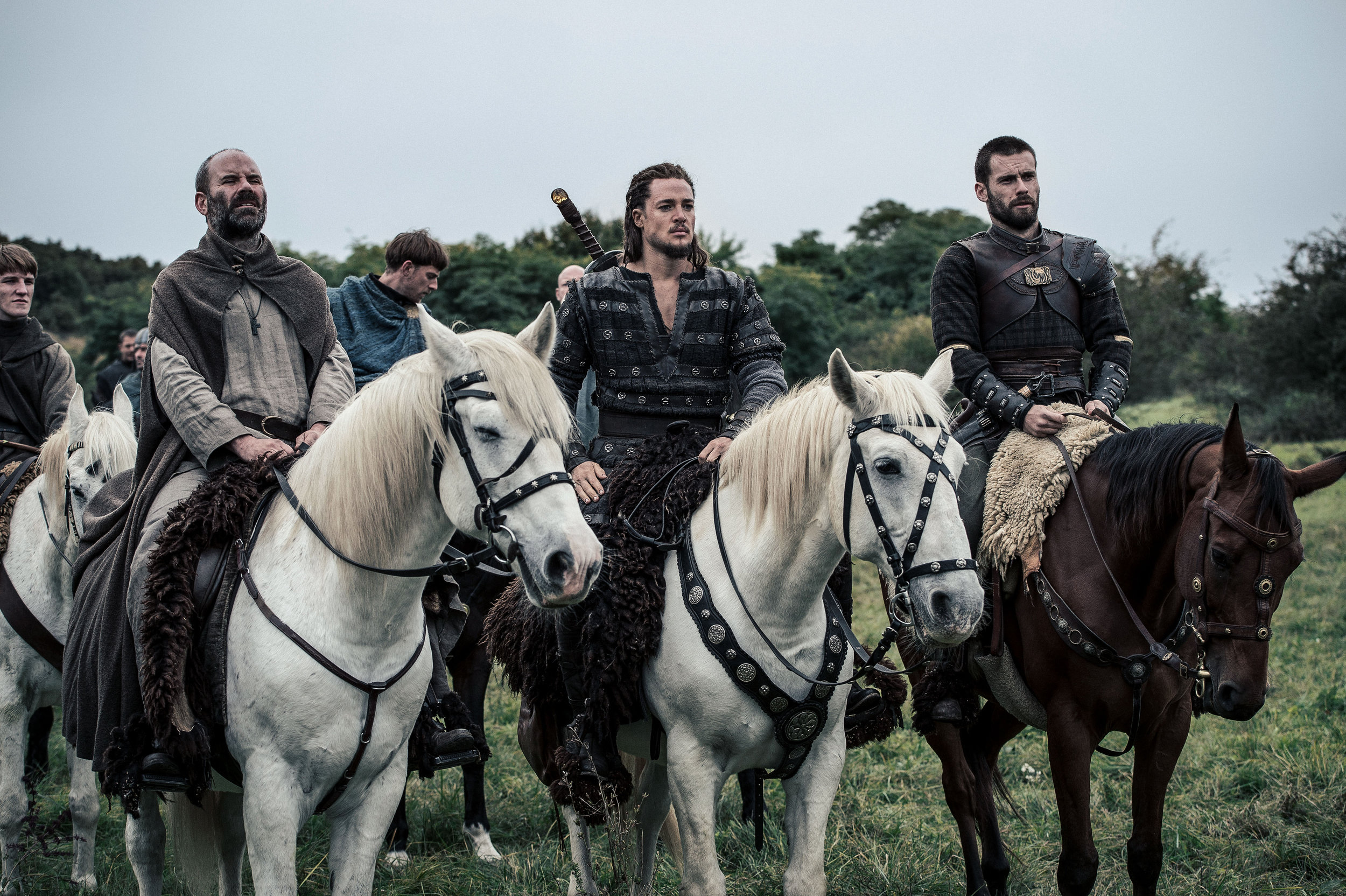 If you made yourself a dire wolf fur blanket fort and binged all five seasons of the British historical drama The Last Kingdom, you are not alone. This show started as a BBC production but was acquired by Netflix. It is based on The Saxon Stories, a series of novels written by Bernard Cornwell, and follows the Saxon-born Osbert of Bebbanburg. Poor Osbert goes through many names and is constantly conflicted between his birthplace and the culture that raised him. Young Osbert is renamed Uhtred when his older brother is killed by the Danes making him the heir of Bebbanburg. When Uhtred’s father is killed by the Danes, he is taken prisoner and made a slave to the Earl Ragnar. Earl Ragnar eventually adopts Uhtred, making him Uhtred Ragnarsson. Uhtred Ragnarsson’s Uncle Aelfric claims Bebbanburg for himself. Uhtred Ragnarsson of Bebbanburg, played by the dreamy Alexander Dreymon, quietly vows to someday reclaim his birthright.

Once you emerge from your dire wolf fur blanket fort, you may be feeling empty and sad but never fear there are many other shows to fill your need for epic battles, plotting intrigue, and steamy love scenes. The shows on this list will help you fill the void and stay in the blanket fort longer. So grab some ale and start your next binge with any of these ten historical dramas.

Staying with the theme of the Saxon and Dane conflicts found in The Last Kingdom, Vikings tells this story through the Danish perspective of Ragnar Lothbrok played by Travis Fimmel. Viking farmer Ragnar Lothbrok leads his people to explore and raid the undiscovered lands of England, eventually becoming the Scandinavian King. He has two children, Gyda and Bjorn, with his first wife Lagertha, and 4 sons with his second wife Aslaug named Ubbe, Hvitserk, Sigurd, and Ivar. His children continue his legacy and have their own adventures. The show was created by Michael Hirst and aired on the History Channel except for the last half of the final sixth season which was released on Amazon Prime. Stream Vikings on Amazon Prime.

More Dane and Viking drama like that of The Last Kingdom can be found in Vikings Valhalla. Vikings Valhalla season one recently dropped on Netflix and is a spin-off of Vikings. Season one was incredibly successful. In the first nine days, it was in the top ten series in ninety countries. Created by Jeb Stuart and set one hundred years after Vikings, it follows Leif Erikson, played by Sam Corlett, Freydís Eiríksdóttir, played by Frida Gustavsson, and Harald Sigurdsson, played by Leo Suter. This is the end of the Viking Age, beginning with the Battle of Stamford Bridge in 1066. Seasons two and three have already been confirmed by Netflix. Actor David Oakes has said that the producers have a five-season arc in mind and based on their beginning success, fans of the show have a lot to look forward to.

If you enjoyed the religious conflict element of The Last Kingdom, you will enjoy the historical drama Gunpowder. This three-part BBC miniseries tells the story of the Gunpowder Plot which occurred in London in 1605. In 17th century England under the reign of King James I, Catholics were severely persecuted for beliefs. Robert Catesby, a devout Catholic, plotted to blow up King James I and his Protestant Parliament on November 5, 1605. Kit Harrington of Game of Thrones fame plays Robert Catesby and has a personal connection to the role being a descendant of Catesby. If you ever wondered what Guy Fawkes Day was all about, this is the show for you to stream on HBO Max.

This History channel series tells the story of the fall of the Knights Templar under the reign of King Philip IV of France. The Knights Templar were a powerful military order during the Middle Ages but when the Holy Land was lost, distrust grew. Landry du Lauzon, played by Tom Cullen is the Knights’ discouraged leader who regains hope when news of the lost holy grail’s whereabouts is delivered. Ed Stoppard, son of playwright Tom Stoppard, plays King Philip. This show was created by Don Handfield and Richard Rayner and filmed in Czech Republic and Croatia. Both seasons are streaming now on Netflix.

Like The Last Kingdom’s Uhtred, Frontier’s Declan Harp is a man torn between two cultures and worlds. Harp, played by Jason Momoa, is a half-Irish, half-Cree outlaw working to end the Hudson’s Bay Company’s monopoly on the fur trade in Canada in the late 1700s. Lord Benton, played by Alun Armstrong, aims to see that Harp does not succeed. The Globe and Mail’s John Doyle says the show is “an action-packed, uncomplicated and very entertaining yarn about the cutthroats who created [Canada] by plundering it, when they weren’t busy killing each other. Highly recommended.” This Canadian tale can be streamed on Netflix.

If you need more vikings in your life but want a break from the drama of it all, Norsemen is the perfect show for you. Norsemen is a comedic take on viking life. Set in the village of Norheim in the year 790, it centers around different leading characters to paint a funny picture of daily viking life. Kåre Conradi plays Orm, a secret homosexual, Nils Jørgen Kaalstad plays Arvid, the chieftains right hand man, Jon Øigarden plays Jarl Varg, the bad guy overlord. Created, written, and directed by Jon Iver Helgaker and Jonas Torgersen this Norwegian show was filmed bilingually by doing two takes of each scene in English and Norwegian. Enjoy the absurdity of viking life by streaming this show on Netflix.

If you enjoyed the mystical elements of The Last Kingdom, like the curse Skade placed on Uhtred, you will enjoy Britannia. Britannia is part fantasy, part fiction, and includes historical events. The show was created by Jez and Tom Butterworth and is set in 43 AD when the Romans invade Britain, succeeding where Julius Caesar failed. General Aulus Plautius, played by David Morrissey, investigates the tribesmen and concludes that the answer to their quest lies in the wisdom and religious power of the Druids. Time will tell if the competing tribes of Britain can resist their invaders. Find out by streaming on Amazon Prime with the Epix add-on.

Created by Kurt Sutter, the mind behind Sons of Anarchy, this show, like The Last Kingdom, deals with the theme of ambivalence based on one’s identity. Wilkin Brattle is a Welsh knight in the 14th century who, while trying to lead a quiet life, gets pulled into a revenge plot that leaves him trapped in the alias Gawain Maddox the Executioner. Unsure if this is his fate, he must continue the ruse for his own safety while he contemplates a course of action for himself. Lee Jones plays Wilkin Brattle/Gawain Maddox the Executioner. Katey Sagal plays Annora of the Alders. The Bastard Executioner is available to stream on Hulu.

Produced by Michael Bay, Black Sails is a prequel to the 1883 novel Treasure Island by Robert Louis Stevenson. It is set twenty years before the novel during the golden age of piracy in New Providence Island in the Bahamas. Watch, preferably with a rum-based drink, to see who will control the island, the British or the pirates. Encounter historic pirates such as Anne Bonny, played by Clara Paget, and Blackbeard, played by Ray Stevenson, when you stream this series on Hulu.

Like Uhtred in The Last Kingdom, James Delaney in Taboo must fight for his inheritance. Taboo tells of Delaney’s quest to claim the North American land, Nootka Sound, left to him by his father after returning to London from twelve years abroad in Africa in 1814. The land is valuable to the fur trade now that the War of 1812 is ending, which makes Delaney a target of The East India Company, among others. Tom Hardy and father Chips Hardy created this 8-part series with Steven Knight which stars Tom Hardy as James Delaney. Taboo features a score by Ad Astra composer Max Richter. Taboo is available to stream now on Hulu.

If your need for historical fiction is still not quenched, consider checking out The Last Kingdom movie Seven Kings Must Die, which recently wrapped production.