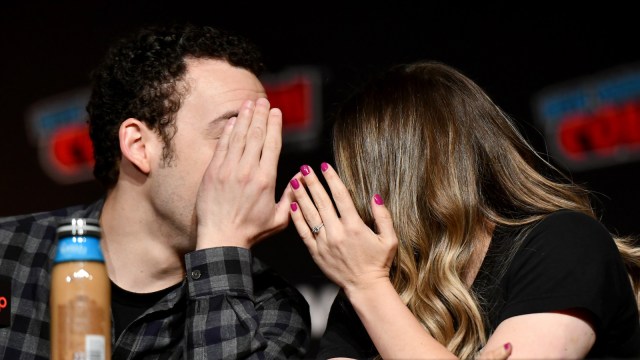 As a part of ABC’s legendary mid-to-late-90s “TGIF” programming block aimed at tweens and teens, Boy Meets World anchored a Friday night lineup that included other popular hits like Sabrina the Teenage Witch and the Steve Urkel vehicle Family Matters.

While ‘90s kids remember the show fondly, Trina McGee-Davis, who starred in the last two seasons as Topanga’s best friend Angela Moore, has spent the past two decades carrying a grudge against her fellow castmates. And this week on Pod Meets World, a rewatch podcast hosted by Boy Meets World stars Danielle Fishel, Will Friedle, and Rider Strong, she spilled all the tea on exactly why. The story centers around the day that she was told that she was not going to be a part of the series finale.

As quoted in Variety, she said,

“This is some ground we have not covered. I was told, in kind of a weird, off-handed way by a very important person, that you guys all went to [showrunner] Michael Jacobs, and you said, ‘We don’t want her in the last episode. She’s somehow taking our light.’ [That] was the gist of it,” said McGee, who played Shawn Hunter’s (Rider Strong) girlfriend on the show. “I was told that after I shot what was the show before the last episode, which was called ‘Angela’s Ashes’ when I left. When Michael announced to me, we’re going to do another show on Angela, I was so happy, not knowing this was going to be the show before the last show.”

She continued on, explaining that she has spent the past twenty-plus years under the impression that her castmates talked the show’s producers into making her character the focus of the penultimate episode, titled “Angela’s Ashes,” in which her character left the United States for Europe. She was told at the time that her fellow castmates didn’t want her taking any attention when it came time to do the series finale, which would have the most high-stakes emotional scenes and highest ratings.

“I remember after we taped the show, I had said to a person, ‘Why aren’t we on the last show?’ Because I know the last show was going to be the one with the ratings and the crying and all the stuff. I was under the impression that y’all got together and did not want me in the last show, for some reason I was going to take some shine or something to that effect… That was really hurtful to me for a long time. To make it worse, people of color tend to look into things a little harder sometimes. So I had cousins calling me, saying, ‘How come you weren’t in the last episode? They just gave you that whole show so that you’d be distracted and wouldn’t be in the show with the real ratings?’ Several of my cousins, my family members were telling me this… I have honestly had that in my head for 20 years.”

The hosts of the show then denied ever having asked McGee be kept off the finale, with Friedle saying,

“Can we say for the record, Trina, that never happened. That’s not competitiveness, that’s sociopathy. This pisses me off. This is next level.”

This isn’t the first time McGee-Davis touched off a firestorm among Boy Meets World fans. In January 2020, she tweeted out claims of racist treatment on the set of the show, saying:

“Called aunt Jemima on set during hair and make up. Called a bitter bitch when I quietly waited for my scene to finish rehearsing that was being f’ed up over and over due to episode featuring my character. Told “ it was nice of you to join us” like a stranger after 60 episodes”

She later clarified to Yahoo! News that this was a reference to Friedle, saying

“I don’t think he understood how I had to deal with it… I didn’t have a hairdresser. All those little micro braids you see, I stayed up all night doing them right before I went on national television for myself.”

She then added that Friedle later apologized but didn’t seem “completely sincere.”

She was willing to accept his apology on Pod Meets World, however, saying,

“I believe you. I can tell by your reactions. I have had that in my head for so long, and I’ve never watched that show. I’ve always felt like, ugh… That hurt me a long time.”