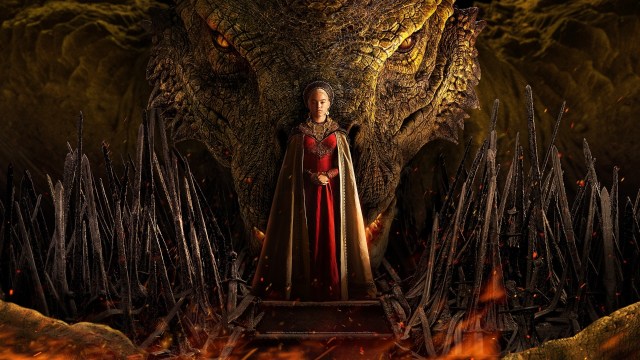 Based on George R.R. Martin’s A Song of Ice & Fire prequel novel, Ice & Blood, House of the Dragon takes place 200 years before the events of Game of Thrones. If the show follows the book, it will tell the story of House Targaryen’s civil war, known as “the Dance of the Dragons.” During “the Dance of the Dragons,” King Viserys I’s son, Aegon II, was crowned king after Viserys’ death. His half sister and Viserys’ chosen heir, Rhaenyra, challenged him for the Iron Throne. Of course, when you’re a Targaryen, dragons are involved. By the end of the war, both Aegon II and Rhaenyra were dead, and her son, Aegon III, took the throne. In other words, it’s a heartfelt GOT happy ending.

What events from the rich history of Westeros could we see in House of the Dragon? Here are six moments that need to happen.

While seeing characters like Viserys and Aegon II coming to life after many nods and allusions in GOT, the most alluring aspect of HOTD are the possible flashback sequences. Martin has crafted a world with a long and rich history that GOT only scratched the surface of. Aside from seeing dragon sky battles, what major events could come to life in HOTD? Let’s imagine the possibilities before the HBO Max series kicks off on Aug. 21.

How much of Westeros’ past we’ll see in HOTD remains to be seen, but there is a strong suspicion that Aegon the Conqueror and his legendary dragons will appear in a flashback or two. Ice & Blood is closer to a history book than a novel, and it begins with Aegon’s arrival on Westeros’ mainland. That could mean that the first image we see is Aegon riding the fiercest of his three dragons, Balerion the Black Dread, whose impressive skull was revealed underneath the Keep in GOT’s seventh season.

Fans have been waiting years to see Aegon and Balerion in the flesh. Next to the Mad King, Aegon may have been the most referenced character to never appear in GOT. Seeing him atop Balerion could top anything we saw in GOT.

The forging of the Iron Throne

Is there any image more iconic to Game of Thrones than the Iron Throne itself? To see it being crafted under the watchful eyes of Aegon I would be a perfect bridge between HOTD and GOT. After all, we have seen the throne’s destruction, so why not see its creation?

When Aegon brought Westeros to its knees on the wings of his dragons, his enemies’ swords were the ultimate symbol of their defeat. The legend is that Balerion’s fiery breath melted the steel, and Aegon had them forged into the most intimidating, uncomfortable throne imaginable.

The huge hunk of metal is similar to what George R.R. Martin envisioned. In his 2014 companion book, he described it as “a great beast towering over the room,” but what he originally had in mind was much more grotesque, like something from a 1980s thrash metal album cover.

“It’s a throne made by blacksmiths hammering together half-melted, broken, twisted swords, wrenched from the hands of dead men or yielded up by defeated foes…a symbol of conquest…it has the steps I describe, and the height. From on top, the king dominates the throne room. And there are thousands of swords in it, not just a few. This Iron Throne is scary. And not at all a comfortable seat, just as Aegon intended.”

With a show called House of the Dragon, the most obvious flashbacks would feature the earliest days of the Targaryens and their 283-year rule. What would be even more fascinating would be to go even further into Westeros’ history to watch the First Men settling the continent. It would be the equivalent of seeing the earliest of Stone Age nomads crossing the Bering ice bridge.

There’s so much to explore in regards to the First Men. The majority of what we learn about them in GOT came from Sam, who was the show’s resident (and perhaps only) history buff. This is an entire world waiting to be unearthed, and it could lead to HOTD depicting the Andal’s invasion.

The Children of the Forest

Season six may have been the biggest tease of the entire GOT run. Specifically, Bran’s flashback sequences gave us so much information about not only Jon Snow, but the entire history of Westeros.

When Bran journeyed far north of the Wall, he was taken in by the mystical Three-Eyed Raven. The old man was accompanied by strange people, none more odd than the green Children of the Forest. The last of their kind, the Children had inhabited Westeros long before the First Men set foot on the land. When humans arrived, they began cutting down the trees and claiming the world as their own. It brought them into conflict with the Children, sparking a massive war that lasted over 2,000 years.

House of the Dragon has the potential to be a great show (hopefully with a better ending than GOT), but seeing the Children battle the First Men eons before the Targaryens’ arrival could be legendary.

The Long Night and the building of the Wall

It was in GOT episode one that audiences got their first allusion to the mythical walkers; we just didn’t know it at the time. When Bran wanted to hear a scary story, Old Nan delved into the most horrifying event she knew, the Long Night.

While the Starks were quick to dismiss Nan, this is GOT, so we knew there was more to it. That’s the fun part about the show’s many legends and myths; there’s more truth in the tales than the characters want to acknowledge. Once we met our first White Walker at the finale of season one, it was clear that the Long Night was much more fact than fiction.

Taking place over eight thousand years prior to the events of GOT, the Long Night is the story of a darkness that spread over the known land as the Others invade Westeros with an army of basically zombies known as wights. As Nan put it, the Others led their armies from atop giant ice spiders. What she didn’t mention, was that they chased a man only known as “the Last Hero.” However, she did describe the winter as so cold that mothers suffocated their babies to keep them from freezing to death. No doubt, this would be an apocalyptic landscape worthy of Robert Kirkman’s The Walking Dead, only better.

Azor Ahai and the Wall

You can’t talk about the Long Night without mentioning Azor Ahai, who saved Westeros from the Others, the White Walkers, and the mindless, undead wights. The mythical hero’s story, however, is one of sacrifice and loss as much as it is bravery.

He was described as an ancient hero who lived some 8,000 years before Aegon and his dragons arrived on Westeros. A follower of the God of Light, R’hllor, Azor lived during the mythical Long Night that plagued the world. He was chosen by R’hllor to bring light to the land and end the darkness. The hero then forged a mythical blade, Lightbringer, which could only be quenched in blood. First, he stabbed it into the heart of a lion, but the blade broke. After 100 days and 100 nights, Azor reforged Lightbringer, and this time, he plunged the steel into his wife’s heart. Her soul then became part of the sword, giving birth to Lightbringer, which Azor used to end the Long Night.

With Lightbringer in his grasp, Azor, who may or may not have been the Last Hero, waged war on the Others and their legions of wights, eventually ending their bloody campaign. This would also give us a chance to see another oft-mentioned character, Brandon the Builder. One of the First Men, Brandon Stark engineered the Wall that separates Westeros from the far north and protects against the Others. He also built the Starks’ iconic home, Winterfell.