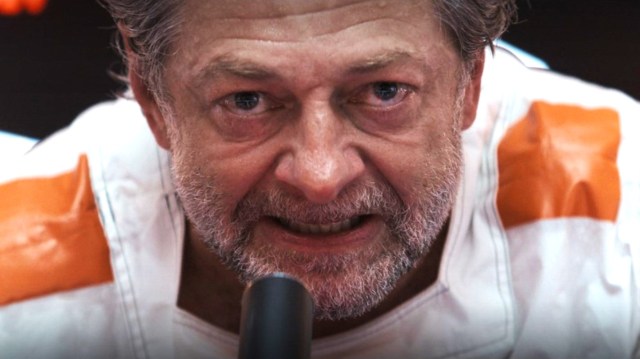 Andor was already hitting home runs in its first seven episodes, but has been smashing them out of the park since episode eight. Much of that success rests on the shoulders of The Lord of the Rings and The Batman star Andy Serkis, who made an unexpected appearance as prison work foreman Kino Loy.

Serkis has been bringing it in literally every scene he’s appeared in, though this week’s prison break episode sees him go above and beyond. Early in the episode, we see his uncertainty, fear, transform into determination to break out. He gives an emotional and inspiring speech that rouses the entire facility into action. Then, just as freedom beckons, we get the bombshell revelation that he can’t swim, and thus can’t leave.

Kino would have been well aware the prison is surrounded by water, so he must have known his chances of freedom were almost zero. However, we haven’t actually witnessed him die, so we’re desperately hoping this isn’t the last we’ve seen of him.

Fans on social media are bowled over, with multiple calls for Serkis to see some awards season success:

We haven’t seen a better performance in many shows this year:

The people have spoken:

Let’s get this man his trophy:

We were totally gripped throughout:

Then again, Serkis has some fierce competition even within this episode, as Stellan Skarsgård delivers a blistering monologue late in the episode about all Luthen has had to sacrifice in his life to start the Rebellion.

At the risk of sounding like a stuck record, Andor is a phenomenal TV show, and at this point probably the best live-action Star Wars media since Return of the Jedi. We have two episodes to go, but the long wait for the second season is going to be excruciating.