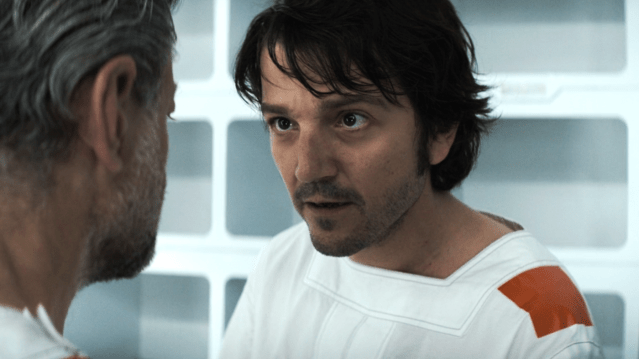 As expected, episode 10 of Andor – “One Way Out” – was centered around a daring prison break. The previous two installments have gradually established the rules of the work facility on Narkina 5, with Cassian slowly convincing Andy Serkis’ Kino Loy that the inmates can either choose to revolt against the guards or die from overwork.

When it began all hell broke loose, with the prisoners bombarding the guards with projectiles, seizing their weapons, and eventually swimming to freedom. But this wasn’t without sacrifices, as many prisoners fell to the guards’ blaster fire, while Kino Loy heartbreakingly revealed he couldn’t swim and had to stay behind.

However, there’s one unnamed character that Andor fans think deserves some more love. The escape plan was predicated on a new inmate arriving and being taken down to the work level. We first meet the new guy shaking in fear as he’s introduced to the prison. He’s then immediately thrown into action and even manages to taze one of the guards, a key event in the successful breakout.

So, some praise for this guy is definitely earned, as one fan put it:

“Mad respect to the new man on the floor. Gets tazed, dishes out a taze of his own, dies for a rebellion he didn’t even know existed. RIP New Man.”

You gotta pick a side fast:

Sadly he didn’t make it out, but without ‘New Guy’ Andor might have died, meaning the Rebel Alliance never gets the Death Star plans, and the Empire never falls:

As far as we can tell, this character isn’t even named in the credits and we have no idea who played him, but little did he know his actions and heroic sacrifice would go on to potentially change the course of Galactic history. So, let’s raise a glass to ‘New Guy’, who’s perhaps destined to go down as one of the shortest-lived heroes in the history of Star Wars.