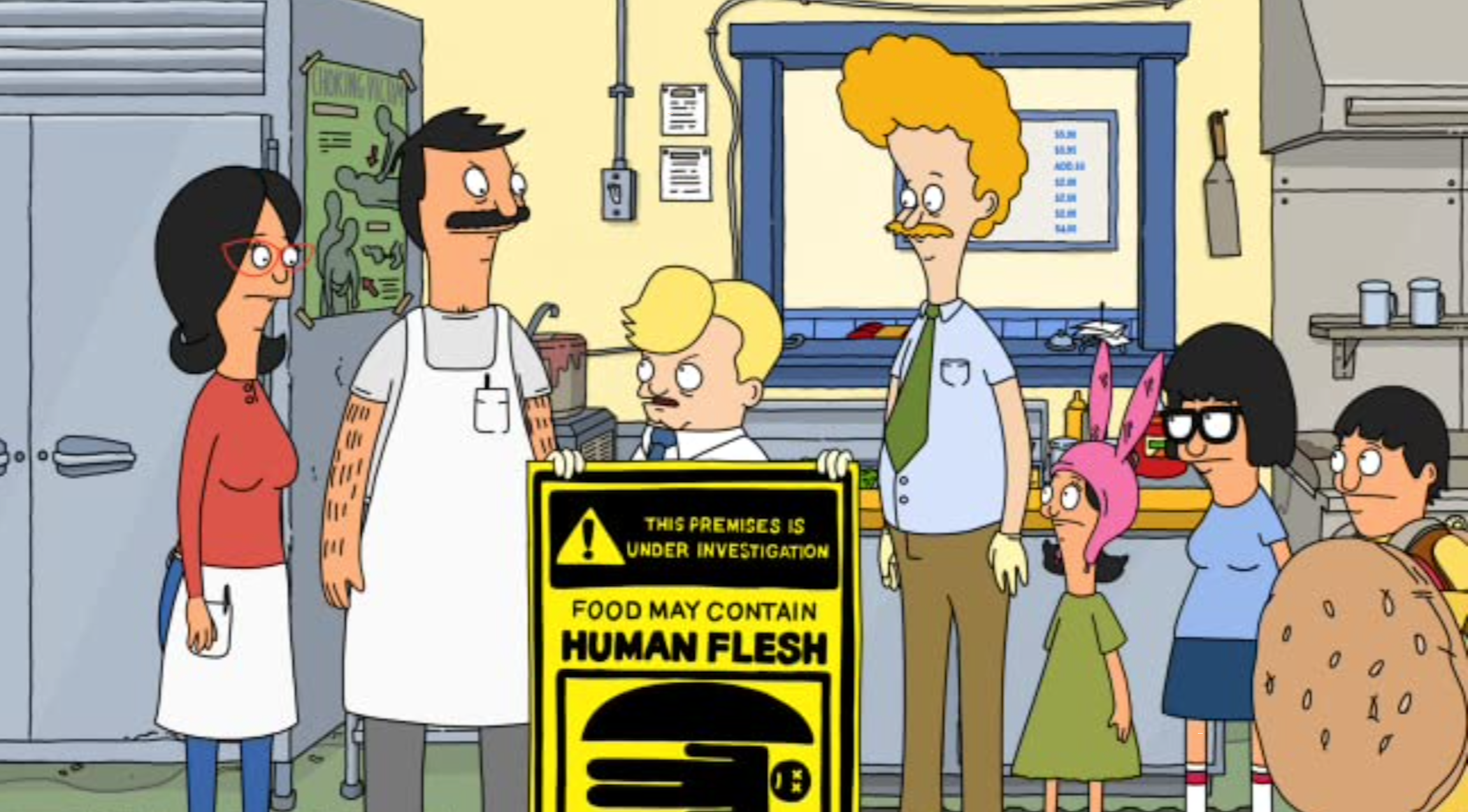 Bob’s Burgers is an animated television sitcom in which parents Bob and Linda and their three children, Tina, Gene, and Louise, run a hamburger restaurant named Bob’s Burgers. It centers around the family and their adventures as they often get into trouble, and their humorous escapades make for hilarious content.

It’s an irreverent series that combines a loveable family with mildly offensive gags to create loads of fun. The show’s originality, adorable animation, and frequent musical numbers make it immensely enjoyable, and the quirky, relatable characters make it a tried and true feel-good show. The show’s theme of family also conveys this attribute and that despite the Belchers’ troubles, they’re constantly reminded of the love they share.

Bob heads to First Oceanside Bank to request a loan restructure. After his proposal is refused, Bob leaves the bank in dismay. Then, a bank robber enters and takes the people inside hostage. While this seems like cosmic karma to Bob, the tables are turned when his restaurant becomes the headquarters for the police department while they’re trying to neutralize the bank robber.

Meanwhile, Louise decides that this is a once-in-a-lifetime opportunity to interview the bank robber for her school essay about the most important person in her life. She successfully ties up the phone lines for her interview through her clever antics, hindering the police proceedings. The Belchers’ relationship with the bank robber then takes an odd turn when they befriend him.

Believe it or not, this is a typical day in the Belcher family’s lives: financial instability, drama in their neighborhood, and questionable people.

Gene, the virtuoso middle child, sees his opportunity at stardom in the annual musical at Wagstaff School, where the three Belcher children are educated. However, chaos ensues when he goes head-to-head with Courtney Wheeler, his ex-girlfriend, in producing the musical.

The episode opens with the Belchers, Courtney, and her dad in the school counselor’s office as they recount the night’s events. Each family argues their case to Mr. Frond, the school guidance counselor, and their stories unfold through a sequence of unreliable narrator flashbacks. From Gene’s point of view, his musical rendition of Die Hard should have been selected for the show. But due to Courtney’s dad’s resources, Courtney’s rendition of Working Girl, the “sassy sister-film to Die Hard,” according to Gene, was chosen. However, the way Courtney sees it, Gene tried to steal her spotlight by putting on a Die Hard production in the basement at the same time as the school-sanctioned Working Girl musical.

This episode perfectly encapsulates the Belcher kids’ escapades at school as they often end up in Mr. Frond’s office defending their mischievous exploits.

Louise, the roguish middle child, is appalled when she gets her first crush on an unlikely candidate.

Tina, Louise’s older sister, has three tickets to the Boyz4Now boy band concert and is waiting for her Aunt Gayle to pick her up. After Gayle calls saying she can’t take them to the show because she accidentally pepper-sprayed one of her cats, Louise is pleased that she doesn’t have to go to what she considers a tasteless, boring event. However, Tina is determined to go, and the two of them set off for the concert. When Louise gets there, she is unimpressed by the boy-crazy fans who pack the auditorium with their fanatical desperation. But when the Boyz4Now band members appear on stage, Louise is starstruck by Boo-Boo, the youngest and the most irresistible group member. Louise’s solution: concocting a plan to hide in the hamper of the Boyz4Now tour bus and meet Boo Boo.

Considering this is Louise’s first crush, this episode is a big deal. And the ending is a slap in the face (pun intended).

Linda, the Belcher mother, is ecstatic after winning a contest to participate in a live-action role-play (LARP) weekend. The Downtown Abbey-esque event doesn’t go according to plan when Linda and half of the other LARP participants must be servants to the other half of the group who act as the aristocrats.

When Bob is invited to drink brandy and smoke cigars with the fortunate LARPers, Linda must act as a lady’s maid, and she and the other servants become increasingly jaded by the menial tasks they must perform. After those playing the aristocrats get excessively drunk on the power, those playing the servants lead a mutiny against their oppressors.

Meanwhile, Teddy, the Belchers’ family friend, babysits the kids. After he throws out his back, he spends most of the episode on the living room floor, leaving the kids up to their own devices. After all, “when the cat’s away, the mice will play.”

Bob is offended when his family decides to spend Thanksgiving at the Turk-tacular Turkey Town Festival instead of doing regular Thanksgiving things. While Bob gets drunk and enjoys Donna Summertime, the kids enjoy the Scramble Pan amusement ride while Linda joins the Turkey Trot with Teddy, a marathon in which you run next to the turkeys.

However, no one told Mr. Fischoder, the festival’s patron, that mixing turkeys with other birds would lead to a pecking order, causing the turkeys to become overly aggressive. As a result, turkeys, geese, ducks, and chickens run amok, attacking everyone and causing mayhem.

To get back to the kids, who are still stuck on the spinning teacups ride, Linda and Teddy must battle the belligerent birds, namely the one-eyed alpha turkey that they’ve dubbed Cyclops.

Here we go with another Thanksgiving episode. If you didn’t already know, Bob’s Burgers goes all out for their Thanksgiving installments.

Bob is excited about a three-day brine recipe for his Thanksgiving turkey. However, the holiday becomes complicated for three reasons due to the family’s dysfunctional dynamics: Tina insists on sitting at the adults’ table; Linda’s sister Gayle is staying with them over the holiday and brings all her cats; Bob’s turkey ends up in a toilet. Hence, the episode name “Turkey in a Can.” Bob starts an inquisition to find the perpetrator of the crime against his precious turkey and hatches a plan to catch the turkey bandit red-handed.

The ending is heartwarming and characterizes the family’s relationship as both absurd and delightful.

Linda is determined to find Louise a BFF. When she invites some of Louise’s classmates over for a slumber party, Louise is horrified at being forced to endure an entire night with them. So she devises a plan to scare them off, one by one. However, bland Jessica (“If she was a spice, she’d be flour”), refuses to leave after the embarrassing evidence of a slumber party faux pas goes missing. A hilarious scene follows in which Louise and Jessica play cat and mouse around the house as Louise attempts to apprehend her foe.

It’s rare for Louise to meet her match, so the tomfoolery between her and the not-so-boring Jessica will surely induce laughs aplenty.

Bob, Linda, and the kids board a Wine Train so the parents can enjoy some reds and whites, eat at a luxurious buffet, and partake in a decadent chocolate fountain. Meanwhile, the kids are banished to the “juice caboose,” a miserable room at the back of the train. After seeing the heavenly chocolate fountain and learning that it’s off-limits to kids, Tina, Gene, Louise, and their school friend Rudy concoct a devious scheme to steal the chocolate.

Meanwhile, Bob clashes with a self-important wine connoisseur after he’s challenged to a wine “taste-off.” What follows is a booze and chocolate-filled episode where everyone gets what they deserve.

It’s Halloween, and Louise is regretful that she has never felt truly scared before. Luckily, Bob and Linda created a haunted house for just that reason. However, the haunted house is a bust as the parent’s scare tactics prove to be less than frightening. The said tactics included tickling the kids’ feet to convince them that rats were on the floor, grapes poorly imitating eyeballs, and spaghetti acting as fake intestines. But when the situation takes an unexpected turn, the Belchers are stuck in the house due to a flat tire and no cell reception. When the lights go out, and an eerie, demonic moaning comes from the basement, Louise realizes she might have gotten more than she bargained for.

We’re taking it back to the first Bob’s Burgers episode, which perfectly encapsulates the show’s charm.

It’s the Bob’s Burgers restaurant’s grand re-re-re-opening after a series of unfortunate events befell the restaurant. On top of dealing with his dysfunctional family, Bob must also prepare for Labor Day, their busiest and most lucrative day. However, thanks to Louise’s show-and-tell homework assignment in which she started a rumor that Bob’s Burgers meat is made from human remains, a health inspector shows up at their door. Unfortunately, the health inspector, Hugo, has a vendetta against Bob as Hugo was once engaged to Linda, who broke off the engagement to be with Bob. After a sign is posted outside the restaurant stating that the establishment is under investigation for possibly serving human meat, the family must work together to ensure that the weekend isn’t a bust.

As the first episode ever, it cemented Bob’s Burgers’ legacy as an authentic, feel-good manifestation of the writers’ creativity and adeptness.