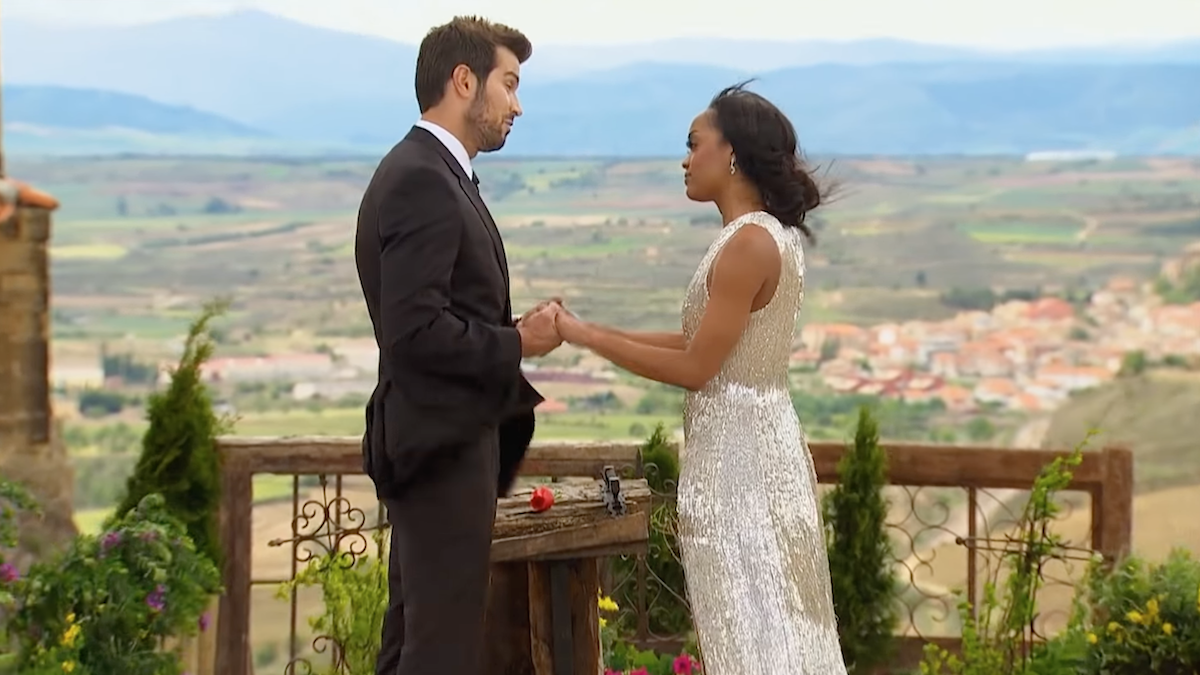 After the ratings success of the first two seasons of The Bachelor, producers decided to turn the tables with a spinoff called The Bachelorette.

The first season resulted in the first wedding from the franchise and its success helped it grow to where it is now at 18 seasons.

Some were boring, some were great, some were dramatic, some were awkward, and some were all of the above. Which were the best? Well, here’s our choice for the best Bachelorette seasons of all time.

Hannah Brown was great but in many ways her season was a disaster. The reason why it made this particular list is mostly because of how she handled everything. Having knocked the wind out of Peter Weber’s sails on The Bachelor (or vice versa), she got her own season and drama ensued.

First, there was the Luke Parker drama, who was so tied to his religious beliefs that he actually said to Hannah, “I just wanna make sure you’re not gonna be intimate with the other relationships in here.” She appropriately escorted him off the show immediately thereafter and told him, “I’ve had sex and Jesus still loves me.”

Nothing, however, could compare to Jed Wyatt, whom Hannah gave her final rose to and got engaged to. Dude had a girlfriend the whole time who said that he went on the show to further his music career, which was at a stalemate for a reason. I mean, just listen to his Better Bowl dog food jingle which we will NOT be showing here because it’s as cringe as he is.

Obviously, the engagement was now off. He ruined her entire season and her chance with another man and quite possibly his own alleged career. Hannah, however, continues to be a bright light in Bachelor Nation.

Bachelor producers made a horrible decision to start this season. They thought it would be cool to have two bachelorettes and then boot one off after the first night. So, Britt Nilsson was forced to say goodbye as the guys voted for Kaitlynn.

One guy, Brady Toops, was very honest that he was there for Britt. So, he consoled her and they dated briefly after the show. Britt Nilsson is now the married Britt Byrne and is a mom to a toddler.

However, Nick Viall is what the season might be best known for. The runner-up the previous season, Viall joined this season midway and the remaining men weren’t happy that Kaitlyn permitted it but can you blame someone for welcoming another possibility on a show about such possibilities?

Nick became runner-up again as Kaitlyn picked Shawn Booth but, as goes most relationships from the franchise, they didn’t last.

This was a hugely important season in the Bachelor franchise. It was the first time that every episode of the season was two hours long and it was the first Bachelorette season in 3 years, thanks to the decreased viewership of the fairly uneventful third season which had also been moved to Monday nights. The producers decided it was time to give it a go again.

DeAnna was one of the two women who were both denied a final rose at the end of Brad Womack’s initial season (yes, he had another!).

The season itself featured future Bachelor Jason Mesnick who finished runner-up here. It also had a soon-to-be familiar face in Graham Bunn, who ended up on both the Bachelor Pad and Bachelor in Paradise.

The winner of the season was pro skateboarder Jesse Csincsak, but their relationship only lasted a few months. Pappas married in 2010 and now has two children with hubby Stephen Stagliano.

From Juan Pablo’s Bachelor season, where she ultimately didn’t put up with his shtick because it wasn’t “ok”, Bachelor Nation looked forward to Andi Dorfman’s season.

Although Andi chose Josh Murray, they weren’t able to make things work but the season is often remembered for runner-up Nick Viall during the “After the Final Rose” episode. Andi had stated she wasn’t in love with Nick, prompting Nick to ask, “If you weren’t in love with me then I’m just not sure why you made love with me.”

When Nick became The Bachelor, she showed up on his season to help him sort through his final choices, so it seems they’ve looked past any of their previous drama.

This season has the most unexpected twist possible. It was supposed to be Clare Crawley’s season. She was popular for dissing Juan Pablo on his season and finally got her own but she fell immediately in love with Dale Moss. So, what happens when you’re the star of a show where several men are supposed to date you for weeks but you experience love at first sight on night one?

At first, it seemed like a massive mess because Clare was not at all attentive to the other men. It didn’t take long for her to leave her own show because she believed she found her one and only. It seemed a bit foolish to not take advantage of getting to know the others just in case things don’t work out with Dale and, sure enough, things didn’t work out with Dale.

As for the show, all the other men were left thinking, “Now what?” Producers grabbed another popular lady from Bachelor Nation and saved the season. The always-likeable Tayshia Adams suddenly had her own season, sort of, or half-season or whatever.

She fell in love with Zac Clark and — get this — she lasted the whole rest of the season! It would’ve been great if she darted like Clare did just to see what would happen next but we’re glad she didn’t.

Tayshia and Zac have since called things off but the season might be the craziest one ever.

The bachelorette, Ashley Hebert fell for the most insincere contestant of them all in Bentley Williams, who admitted during the season that he didn’t even care about her and thought she wasn’t attractive and just wanted to “have her tickle my pickle.”

Classless Bentley even said, “I would literally rather be swimming in pee than planning a wedding with her.” Finally, Ashley got smart and gave that disgusting human the boot. In the end, she chose JP Rosenbaum. They married and had two children but then, last year, announced their divorce. They say they are still best friends and Ashley is now dating a new man (whose name is not Bentley).

Jordan Rogers, brother of NFL quarterback Aaron Rodgers, easily coasted to the final rose thanks to the strong connection between him and JoJo, who had been on Ben Higgins’ season. Such smooth sailing for love make this story high on our list.

The season also gave us the great Evan Bass and also Wells Adams who is now the Bachelor in Paradise bartender. It also gave us the practically insane Chad Johnson who told off host Chris Harrison and was later arrested for domestic violence.

It’s safe to say that JoJo and Jordan are still going strong after five years together, especially considering they just got married a couple weeks ago.

Desiree was in the final four of Sean Lowe’s season before she was chosen to be The Bachelorette. During her season, she fell for Brooks Forester but he left because he wasn’t ready for marriage. So she chose Chris Siegfried but Bachelor Nation was convinced that she “settled” for him after the departure of Forester. Ultimately, however, their story is a successful one. They got married in 2015 and now have two kids.

Also on this season was Juan Pablo Galavis who was then chosen for his own Bachelor season which was an unforgettable disaster.

Rachel Lindsay, an attorney, was one of the best Bachelorettes ever, partly because she knew what she wanted and didn’t put up with anyone who wasn’t there for the right reasons. Of course, many other leads on previous shows said that but Rachel actually did that. Those focused on unnecessary drama with others were quickly disposed of and Rachel ended up with a tough decision once it came down to the final four because she managed to find the best men who were also completely focused on her.

Once it was down to the final two, Peter realized that he wasn’t ready for marriage just yet, which only made Rachel’s decision easier. She happily gave the final rose to Brian Abasolo and accepted his proposal. They married 2 years later and she is now a correspondent on Extra, among other things.

This is the first true success in Bachelor Nation history. Trista’s season ended perfectly as she chose Ryan Sutter and also accepted his proposal. They later got married on TV in December of 2003. Nearly 2 decades later, they are still married and have 2 children.

Her season wasn’t without some surprises though, the biggest of which was who didn’t win her heart. It seemed as if she were likely on her way to offering the final rose to Charlie Maher. They had obvious chemistry and she admitted at one point during the season that he was the one that she was most physically attracted to. She also said about him that, “We have a lot of the same values and the connection we have between each other is real.”

However, there was that poetic man named Ryan Sutter who swept her away, despite her strong feelings toward Charlie. Sutter was genuine, kind, and romantic. Trista just couldn’t resist his natural charm and why would she want to anyway? She was happiest spending time with him.

Their wedding was watched by 26 million TV viewers and their successful relationship is likely a major reason why The Bachelorette continues today.