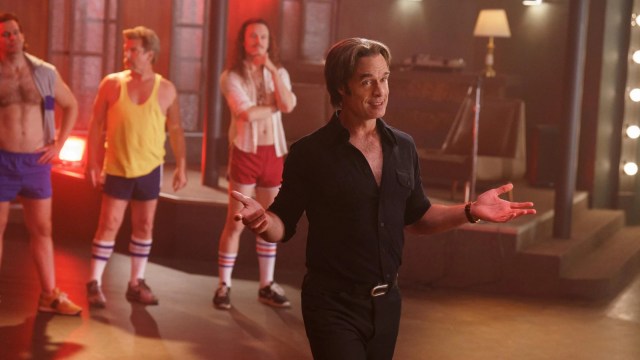 Chippendales is a popular touring dance troupe that performed Broadway-like burlesque shows. Their performance mostly targets women audiences since the dancers are predominately male. The dance troupe has toured across the globe in the USA, Europe, Asia, and Africa, and dancers would receive over 2 million views annually worldwide.

Hulu and Disney Plus have released their brand new drama series, Welcome to Chippendales, a show about Chippendale’s founder, Somen “Steve” Banerjee, and the company’s dark history behind the scenes. But despite what happened in the 80s and 90s, the troupe is still successful to this day.

Whether you’ve already checked out the new show or want to learn some background info before diving in, here is what you need to know about Chippendale, the famous all-male dance troupe.

What year did Chippendales begin?

Before Chippendales became the touring dance troupe that we know today, it was a club that started in Los Angeles in 1979. He bought the failed Destiny II club and renamed it Chippendales. What made this club unique and successful was that it was the first to provide an all-male strip troupe on stage.

According to LA Times, the club would host “Male Exotic Dance Night for Ladies Only,” and drew a large crowd of female patrons. Chippendale charged $20 for a chance to interact with the male dancers in the club. After its success in LA, the club branched out to other cities such as New York, Dallas, and Denver. Eventually, imitators spawned during the height of Chippendale’s success.

What made Chippendale successful were the talented dancers that performed on stage. When the club started, it legitimized stopping as a form of entertainment. Not to mention, would recruit new members to join their team. Some of the original dancers when the club first started were Michael Rapp, Dean Mammales, John Bernard Richardson, Scott Marlowe, and Jonathan Hagan. All these dancers starred in the 2019 documentary, Chippendales Off the Cuff.

Despite other popular male acts that exist, Chippendales set the stage for all-male performances, targeting women. They’re still touring to this day and, according to their official website, they offer Cameo video appearances from the dancers themselves. So feel free to get to know the real Chippendales stars, if you’re so inclined after learning the truth about the troupe’s dark behind-the-scenes history.

Welcome to Chippendales is now streaming on Disney Plus and Hulu.