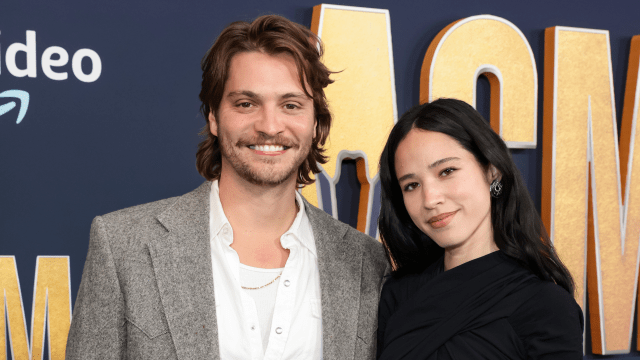 Drama, romance, and heartache; mix them in with cowboy hats and tight jeans, and you get the makings of an incredible television series. Paramount’s Yellowstone is one of the most well-crafted, emotionally driven, and incredibly acted shows on television.

The relationships in the series take viewers on an emotional rollercoaster in every episode. In fact, the series hinges on it. While it’s a western and a drama, it’s also very much a show about relationships and bonds; the way we often hurt those we love the most, and how we find the strength to forgive them.

One of those relationships full of love, hurt, and forgiveness is that of Kayce Dutton (Luke Grimes) and Monica Long-Dutton (Kelsey Asbille). They’ve experienced a series of ups and downs in their time together, and season four saw them amid something exciting but terrifying, a journey that leads him to two very different paths.

Kayce’s spiritual quest has undoubtedly been something that has left an impact on the Dutton family as an entirety. It’s also been something that will reshape every single step of Kayce’s journey. He’s always been a family man, loyal and trustworthy — but he’s seen a future with a dark promise, and it’s terrified him.

When it comes to Kayce and Monica, it’s been a journey of extreme highs and tremendously tragic lows. Their paths have crossed with so much hurt that it’s almost a miracle they’ve survived this long. When Kayce muttered those six words at the end of season four, fans knew they were in for something monumental.

Does Kelsey Asbille know what those infamous words mean

When Grimes and Asbille got to the significant part of the script that would test the claims of all of our waterproof mascara, it took them by surprise as much as it hurt them.

Asbille told TVInsider that it was impossible to continue reading it without knowing what happened, and Luke Grimes, who plays Kayce, felt the same way.

“I just had to know. Actually, Luke also had to know. So we went straight up to Taylor Sheridan and were like, “You gotta tell us. We just gotta know our future.” So we do have a pretty good idea, which I’m not allowed to say.”

Kayce Dutton is the son of John Dutton, wife to Monica, and father to Tate — and he saw the “end of us.” The open-ended idea has left fans reeling since they first heard it.

Asbille and Grimes are preparing to embrace whatever turmoil is headed their way, in whatever complicated ways it comes. Asbille mentioned that reading the script and seeing those words was a lot to take in.

“At first, you fear the worst, and it just breaks your heart. That’s why I think we really had to know.”

What does Asbille think Kayce meant with those six words

Asbille isn’t letting on to anything specific, and that’s likely because she already knows what’s coming. She can’t give too much away without fans wondering if her opinion has been swayed by what Sheridan told both her and Grimes.

So does Asbille think Monica knows what Kayce says when she hears those words come out of his mouth?

“I think it’s exactly what you’re saying. There’s her own fears: Do you mean the end of us? Or is it a larger picture? But she really lets that moment sit and we’ll definitely address it in the next season.”

With such an ominous statement, it’s going to be something that takes a while to uncover. The fear that something big is ending, an important us, is something that weighs on the shoulders of Kayce, Monica, and all the fans who heard those words.

Is it a collective us? A romantic us? Are the familial ties that bind being broken when “us” ends? The possibilities are endless, and none of them are satisfying. Kayce has been through so much that the only ‘us” fans will be happy about the ending is a trail of heartache, but that doesn’t make much sense in this context. Something important is ending, something that left an innate sense of fear in Kayce’s eyes as he muttered the words; it will be significant and impactful.

What is next for Monica and Kayce

In the same interview with TVInsider, Asbille shares that while she, Kayce, and Tate got away from the ranch, they’re never able to escape the reach of the Duttons. In interviews, she treats that idea much like Monica does; it’s the bane of her existence, but something she also knows gives her a step up. Yes, being intertwined with the Duttons provides a sense of chaos, but there’s no fiercer protection.

With another Dutton on the way, Kayce and Monica will certainly be growing closer and experiencing the excitement in the lead-up to her giving birth. Kayce will undeniably be dealing with what he learned on his spiritual journey, and Monica will be trying to create a sense of stability for her husband, her son, and their little one on the way.

Asbille also notes Kayce’s interactions with a particular character last season, Avery. On the one hand, the actress said it was nice to see Monica in such a “normal” place with Kayce; jealousy is more manageable than a constant fight for your life.

“I know. In some ways, I really appreciated seeing the jealous side of Monica. It really is life or death on the ranch for her and her family, and so I think it almost feels like maybe it’s still a threat, but it’s something that’s been grounded in a reality that’s still a bit safer. She was also kind of cheeky about it, which I really liked.”

On the other hand, we’re not sure Monica is in the mood to add jealousy issues to the already-full plate she’s carrying. They’ve been through a lot together, and with the two expecting a second child, she certainly won’t want a flirty young woman hanging around her husband.

While the future for everyone at the Yellowstone Dutton Ranch is unclear, we know there will be plenty of ups and downs for them to experience — together.

The exciting fifth season of Yellowstone kicks off on November 13, here’s hoping we don’t have to wait too long to find out what “the end of us” really means.