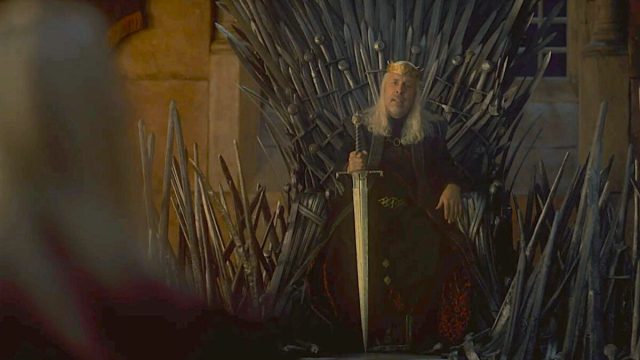 In only the first episode of House of the Dragon, King Viserys has to go through one of the saddest and most difficult tragedies that any person might ever have to go through at any point, losing a wife and child. In his search for an heir, Viserys had gotten his wife, Aemma, pregnant many times.

She mentions many times how she has struggled to birth children, other than their daughter, Rhaenyra. This came full circle when she was in labor with their son, Baelon, and he was coming out feet first, something that is incredibly dangerous to the mother and child. The maester that was present at the time, Grand Maester Mellos, advised Viserys that there was a theory from the capital that there was a way that might work, but was very dangerous for both lives.

If Viserys had not done so, Aemma would have still been alive, however, he was so desperate for a son that he said yes to this unproven technique. It did not work, and Viserys was left without a wife and son. After seeing how sad and depressed he was, along with the fact that he himself had his own issue on his back, fans are wondering if Viserys will ever get married again.

Will King Viserys ever get married again?

Seeing Otto Hightower sitting on the council for King Viserys should jog some of the memories of those who know the backstory of the Targaryen house. Indeed, King Viserys will get married again, but not to a Targaryen, which is very surprising. He will instead be married to Alicent Hightower, daughter of Otto Hightower.

During the first episode, Otto pushes this narrative and has his daughter dress in one of her mother’s gowns to go and comfort Viserys in the immediate aftermath of his wife and son passing away. This at the time looked as though Otto was attempting to get some of his blood on the throne, and it will indeed happen that way. King Viserys choosing to marry again and outside of the Targaryen bloodline is very strange, as it is custom for Targaryens to marry within their own bloodline.

The goal is to keep their line as pure as it can be, however, this is one of the reasons that it seems that some of the Targaryens are very vicious and evil. It will be interesting to see the dynamic between Rhaenyra and Alicent develop once this happens, as they are clearly best of friends.