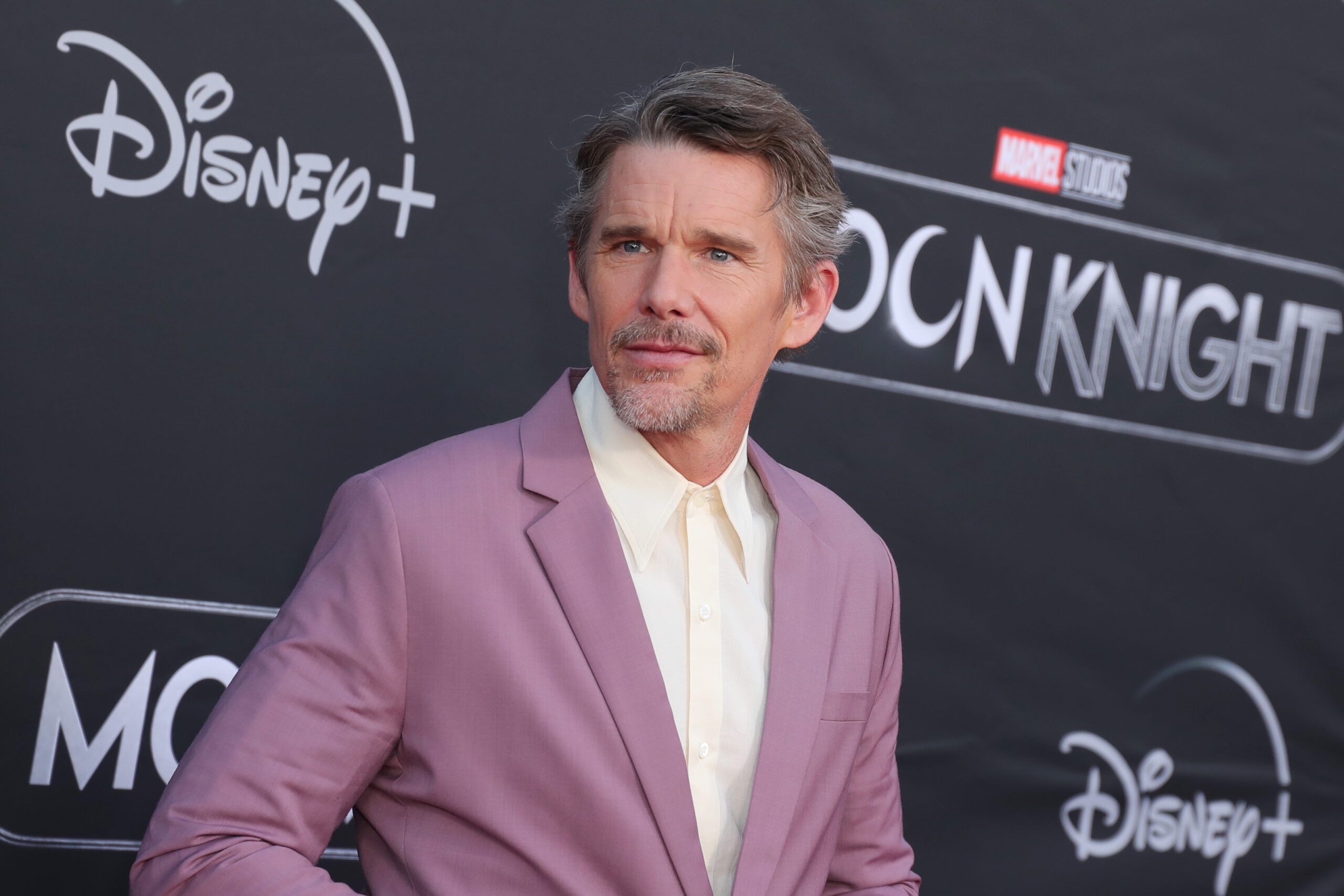 Oscar Isaac and Ethan Hawke may be enemies in Moon Knight but in real life, they’re actually buds.

In fact, it was Isaac, who plays the titular character, who asked Hawke if he would be interested in playing cult leader Dr. Arthur Harrow, according to a recent interview with Hawke in The Hollywood Reporter. He immediately said yes.

Another serendipitous occurrence? They both loved running while working out script issues and storylines. Hawke said it really helped the show.

We both realized that we like to run. So it was a great way to talk and get to know each other and make small talk about the show and work out problems with our scripts. That’ll probably be what I remember most about our summer. Just battling out the scripts as we ran around Budapest.

Hawke also revealed that he got a huge amount of creative freedom in the role – something he wasn’t expecting. In the opening scene, he lines his shoes with glass to the tune of Bob Dylan’s “Every Grain of Sand.”

[Marvel Studios has] tremendous faith and belief in the actor’s ability to contribute. That opening scene is a great example of [Marvel] using your creativity to help get you to invest in the show and to come up with original ideas. So I was really impressed by that. At one point when Oscar and I were rehearsing, I said to him, ‘You realize that they’re being so kind? They believe in us so much that if this doesn’t work, it’s our fault. We can’t blame anybody.’ But that’s really empowering as a performer. Yes, you have to work in their kitchen, but they’re going to let you work.

He went on to further explain that he wanted the character to really have an intriguing introduction, like something out of a comic book.

This is where the studio surprised Hawke by basically handing the reins of the character’s development over to him.

And then they turned it back on me and said, “Well, would you tell us what you think it is?” I was always hypnotized by deeply spiritual people who were self-lacerating. You hear stories about all these saints and how they would wear hair shirts or whip themselves. So I always was like, “I thought we were supposed to love each other and be kind. What is all this self-immolation? What is that about?” So I had this vision of him pouring glass in his shoes and listening to Bob Dylan. And then I explained that to them, and they were like, “Let’s do that!” And I was like, “Alright!” But that’s how that came about, and I’ll be curious how Billy Bob came up with that in Sling Blade. Mine was more inspired by … I don’t know. I guess I was probably reading too much Flannery O’Connor.