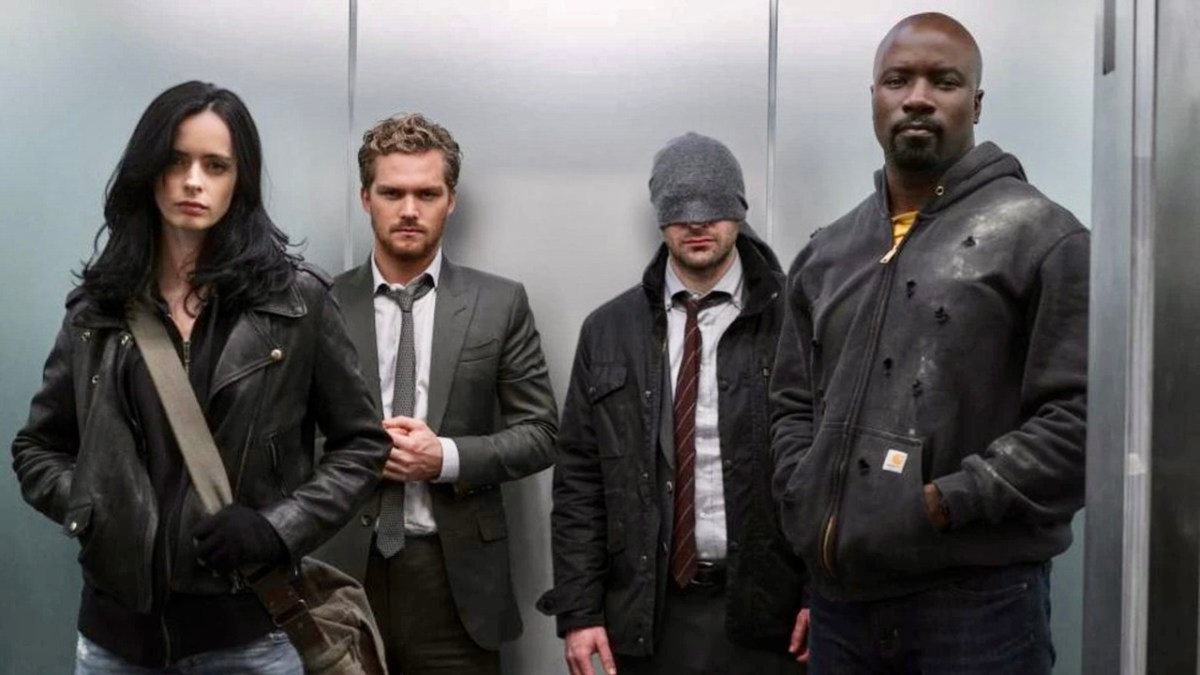 Before Netflix and Marvel began to squabble over creative differences, and before the introduction of streaming giant Disney Plus, The Defenders Saga offered many fans a glimpse into lesser known Marvel Comics heroes and villains, as well as their captivating storylines.

These Netflix productions were some of the first superhero stories to hit streaming platforms, and proved to be a huge success for the titan streamer. Following the stories of Jessica Jones, Luke Cage, Iron Fist, The Punisher, and Daredevil, the characters all existed in the same universe, and recently, we’ve come to understand that some of them are even part of the groundbreaking MCU canon.

While they may have all suffered the fate of unwanted cancellations, and could have done better in some situations, here are the six shows that make up The Defenders Saga, ranked from least to best.

Danny Rand, played by Finn Jones, returned to New York from the Lost City of K’un-Lun as Iron Fist after learning how to channel his chi into his hand through martial arts training. On his return, He is stuck with having to choose between pursuing his family business legacy and maintaining his title as Iron Fist. While still a fairly good offering, the series is widely considered the worst of the Defenders Saga releases, partly due to Danny’s character being rather dull and annoying. While Finn Jones’ acting is nothing short of brilliant, it isn’t enough to save the poor writing of the show. Danny is whiny, and compared to the other Defenders, doesn’t exactly have the most interesting powers. The show has a very slow pace and there were a couple of side characters whose relevance the viewers don’t quite understand. Another thing that makes Iron Fist a bit more disappointing is the fact that it failed to focus on Colleen Wing, played by Jessica Henwick, who is considered a more worthy Iron Fist. Danny finally accepts that she is a more worthy vessel at the end of the second season and passes the mantle to her, but the series was already unfortunately canceled by Netflix, thus ruining the chances of exploring Colleen’s journey.

Uniting an ensemble cast of talented stars, The Defenders brings together the heroes: Daredevil, Jessica Jones, Luke Cage, and Iron Fist in an effort to defeat an organization of evil, mystical ninjas called The Hand. The series can be a bit confusing because it feels like a rushed third season of Daredevil, rather than a standalone offering. In order to properly understand The Defenders, viewers must have seen the first and second season of Daredevil, and if that wasn’t upsetting enough to fans, the third season of Daredevil picks up right after the events of The Defenders. For loyal viewers to only one of either shows, many questions were left unanswered, or at least answered elsewhere, leading to a ton of confusion. Another reason why the show is considered bad by many is that it weirdly places a ton of focus on Iron Fist, and despite it having just eight episodes, it’s very slow paced, and lacks engaging fight scenes.

The Punisher follows Jon Bernthal’s character Frank Castle, as he struggles to accommodate his very violent alter-ego while still being his original and quiet self. Much like his comic book counterpart, The Punisher is an anti-hero who is traumatized by his time as a Marine in the past and is trying to uncover the mystery behind the death of his wife and two children. Even though Bernthal brought enough gut and force to the show, like many of the others in the Saga, it moved at an extremely slow pace, and much of the storyline really did not have to be dragged out into a second season. It also failed to explain The Punisher’s origin deeply, which left a lot to be desired from those unfamiliar with the comic books. A hit or miss, depending on the viewer, was the extreme goriness of the series, because while many enjoy that type of content, others found it a bit too much.

Hailed as one of the finest adaptations of an underrated comic book character, Luke Cage is a dark, socially conscious television series that focused on issues like Black masculinity, racism, community, and gun violence. It’s about a Black superhero with super strength and impenetrable skin that developed from a failed experiment. In the series, Mike Colter magnificently  takes on the role of titular character, after initially appearing in Jessica Jones. Luke Cage tries to rebuild his life in Harlem, while struggling as a superhero with a criminal past. Colter managed to project Luke’s torment and heroism, especially in the first season, which is considered to be one of the best in the Defenders Saga. The second season, though still praised, polarized many due to its confusing plot and focus on the side characters and their origin stories, thus taking the spotlight off the fan-favorite Defender. At the end of the second season, Luke Cage becomes the leader of the club Harlem’s Paradise, taking much away from the show as it defeats the purpose of the character trying to get away from his corrupt and criminal past. While some believe there’s a large aspect of realism in this plot line, other fans were left asking, “Where’s the redemption?”

With a cancellation that shocked and upset many fans, Jessica Jones is still revered as one of the best in the Defenders Saga. The series follows the titular, grumpy private investigator that got her superpowers from an experiment, and is pretty much over superheroics. This weirdly makes for a very likable protagonist, and a faithful live adaptation of the comic book heroine. Krysten Ritter’s enigmatic portrayal of the troubled character also scored major points with critics and fans alike. Jessica’s  backstory is very interesting as she was mind-controlled by the villain, Killgrave to murder a woman, who was later revealed to be Luke Cage’s wife. The series deeply explains how manipulative Killgrave is and his entitlement and obsession over Jessica. In the final season, Jessica is able to end Killgrave’s terror by tricking him into thinking he has control over her mind, only to one-up him. One of the easier superhero series to binge through, and with some of the best supporting characters, Jessica Jones is still on many fans’ watchlist today, despite its cancellation in 2019.

Daredevil is about a lawyer named Matt Murdock, who became blind as a child after an incident involving a chemical spill. His blindness resulted in the use of his other heightened senses to fight crime. He’s also trained in martial arts like Iron Fist and as a result, his fight scenes are more captivating, considering that he’s blind and can recognize people from just the sound of them breathing. The great thing about this series is that despite the presence of complex side-characters, it still manages to be well put together and understandable. Another advantage this series had is that its cancellation was announced before the third season was done, so it gave the opportunity for the most redeeming and conclusive ending out of all the series in the Defenders Saga.