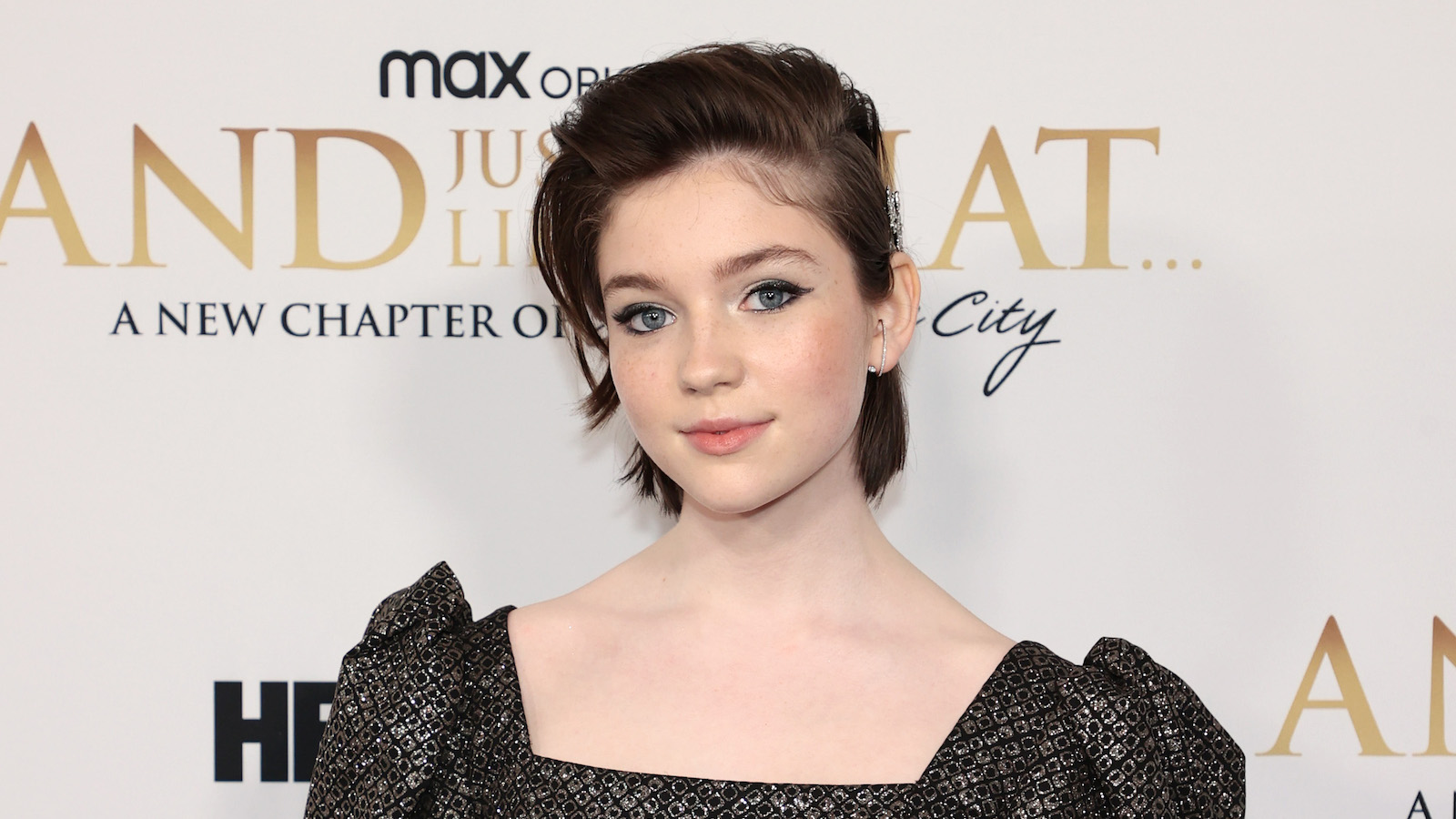 Sex and the City finally met Gen Z in the HBO Max revival And Just Like That, touching on the inner lives of kids for the first time as Charlotte and Miranda’s children are starting to become their own people. And while Brady’s boundless libido is certainly memorable, Rock Goldenblatt, played by Alexa Swinton, is a standout role.

Rock comes out as nonbinary in the series, which throws their loving but total control freak of a mother, Charlotte, through a loop — particularly when seemingly everyone else knows they’ve changed their name from Rose to Rock via TikTok before telling their parents, a plotline taken from writer Samantha Irby’s own experience as a stepmom.

Swinton (who uses she/her pronouns) comes from a family of entertainers (yes, including Tilda, though distantly), and the family puts videos up on their YouTube channel, including the actor’s forays into original music with songs like “You, Me, and My Purple Docs.” In fact, her mom Inna Swinton was in an episode of the original Sex and the City and collaborated with Alexa to create a TikTok for the show that actually felt authentic to Swinton.

Swinton previously starred as a young person in M. Night Shyamalan’s Old and appeared regularly on Billions in a role that required the actor to skateboard, which came in handy for Rock. Should the series get a second season, Swinton hopes Rock’s skating skills improve, telling We Got This Covered, “It would be really cool if Rock decided they were going to ollie.”

Outside of skateboarding, we talked to Swinton about knowing all the Sex and the City characters from social media, the mistakes millennials make on TikTok, and playing a character with a positive coming out experience.

What did you know about Sex and the City going into it?

“So I knew as much as you’d expect, like a 12-year-old to know, especially in the industry. I had watched so many videos about Carrie’s clothes, about Charlotte’s clothes, about everyone’s clothes. I knew quite a bit about Carrie’s Manolos. I also knew a lot about her entire storylines from memes on Reddit and Instagram. And so it’s been really funny because while I hadn’t watched the show, I knew the characters very well and they were still near and dear to my heart.”

I wanted to talk to you a little bit about fashion because it’s obviously such an important part of Rock’s storyline and the show in general. When Rock doesn’t want to wear the dress Charlotte picked out, it’s the first time we see them stand up and take control of their gender identity. How would you describe Rock’s evolving style?

“I think Rock has kind of gotten comfier with who they want to be. I think that through the entire show, you kind of get a lot of [Rock] turning their clothes into more like skater chic clothes, I guess you could say. Rock kind of lowered the femininity. I love their clothes. I think they have really cool outfits and all their jewelry. They definitely have a pretty awesome outfit in episode 10 that is jaw-dropping, in my opinion. My jaw dropped when I saw it in the costume fitting room, so I think that’s their big thing — that outfit in episode 10.”

You decided to actually cut your hair, right?

“[Showrunner Michael Patrick King] was like, ‘We would love it if Alexa could do this. And we understand if not, we can always get a wig, but it just might help for the integrity of the character.’ Especially because, in my opinion, when you’re playing a role like this, it’s important that if you’re not nonbinary, it’s not always something you can exactly relate to. You don’t want the people that are watching to feel like it’s just totally a character, that you don’t have any care for the actual character. And so, cutting my hair is a decision I wanted to make so people would feel that I really did care for the character, which I do. I love Rock. I also wanted to cut my hair really short. My dad and mom had heard begging for at least a few months, so it worked out.”

Besides wanting a cool haircut, what part of Rock’s story did you connect to the most?

“I would say just like how they love their family throughout the entire thing. While I can’t relate to the gender part, I can relate to them being able to talk to their parents about what they’re feeling and sharing their opinions and living their life in like the Gen Z kind of way, I guess you could say. We both have strong senses of self. We’re both really open-minded and free. We both game, and I think that’s a pretty great part of the Rock storyline. The entire skater arc was kind of fun.”

Sex and the City had never dealt with social media before, so it was kind of fun to see how they would take it on and how Carrie would not be the best at it, which felt true. Did you write the rap? Was it that or taking the words in the script and deciding how Rock would actually put it on TikTok?

“[I was given] just the words, my mom and I thought of how Rock would do it. Our inspiration after hours of scouring through TikTok was Justin Bieber in the end, that swagger a lot of people [including] Justin Bieber on TikTok have. We were like, that would be a great thing to do for the rap because Justin Bieber is great, but his TikTok presence is the epitome of a young millennial trying to be relatable on TikTok, so it’s kind of cringy. I love him still. He’s a great person. Makes great music. But to be a TikTok star, there has to be something special.”

“So we were like, that’s perfect for us, especially with the background music, it’s not even uploaded onto the TikTok, but it’s playing in the background, which is something that I can actually tell you millennials have been doing on TikTok. I have multiple videos of them saved to my phone talking about how the side part isn’t outdated. It’s really funny. But I was like, this is perfect. This makes so much sense. So we took the words and kind of made it our own. However, I did add one phrase at the very end, because obviously, Rose changed their name to Rock, and so I thought of, ‘Let’s rock,’ which might seem so simple, but I thought it was really funny and it did make it to be it didn’t make the final cut, and I’m just really proud of that.”

What do you hope parents who like might be in a similar situation to Harry and Charlotte to take away from the show about how to talk to their kid?

“I hope that there are parents that watched that maybe had their child come up to them before or really recently, and maybe they weren’t so used to the idea or weren’t so sure what it meant or weren’t so open to it because they just had no clue what it was. And I just want them to see that their child is still a human being and that it’s not a phase or anything. There’s still so much love that Charlotte and Harry had for their child, regardless of what their gender was, and I hope that they realize that’s something that they should provide for their child, even if they don’t understand exactly what they identify as.”

What kind of music do you make and hope to make?

“I kind of want to go the indie-pop route. I’m a huge fan of Clairo, DoJi, the Neighbourhood, Wallows, those types of people. I think it’d be really fun to really get more into music like that. I also just want to perform with Taylor Swift, which would be really fun. She does a lot of stuff with Phoebe Bridgers — well, one thing with Phoebe Bridgers — but that’s a lot for Taylor Swift. I really do enjoy listening to music like that, and I’ve been trying to figure out how to write it, too.”

Taylor Swift and her team see all, so putting it out in the universe is the first step.

“Exactly. It’s not that I haven’t already been manifesting, but it will further the manifesting.”

The And Just Like That season finale will be available Thursday, Feb. 3 on HBO Max.

This interview has been condensed and edited for clarity.