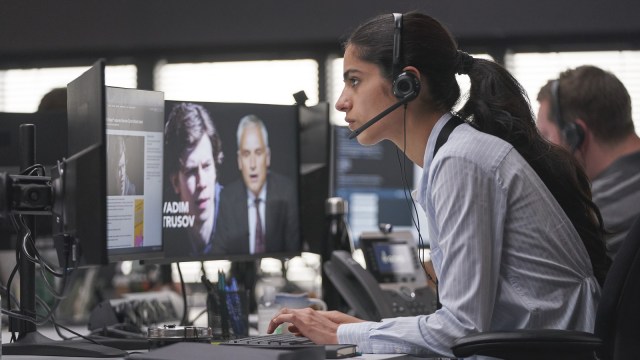 British actor Hannah Khalique-Brown is a crucial element of Peacock’s new limited series The Undeclared War, which launches this coming Thursday, August 18. In her role as Saara Pavin, she gets to share the screen with Oscar winner Mark Rylance and Mission: Impossible mainstay Simon Pegg.

Hannah recently took time out to talk to We Got This Covered about her role in the forthcoming series, as well as sharing some firsthand experiences of working alongside these revered industry veterans.

Saara is very much the driving force of this show from the off. What was it that resonated with you personally?

I am really glad you feel she is a driving force, because so much resonated with me about Saara. The drive that she has where she expects a lot of herself and she really likes to prove people wrong when she is underestimated, that’s definitely something I can relate to and found a lot of satisfaction in.

She is very ambitious, she is very driven, she does expect a lot of herself  and I feel the same way. Completely different disciplines obviously, she’s a hacker and I am an actor, but that kind of drive and ambition I really connected with. However, as people myself and Saara are completely different people. I joked about this with Peter (Kominsky) a lot, he says “you are not like her” and I say “I know, I am an actor” (laughs). I love Saara, and that is the key to playing her.

Peter Kominsky has crafted something unique with The Undeclared War. How much did he play a part in shaping your character?

Pretty much all of it from the very beginning. I auditioned for this role for about a year. It started with a self-tape, then another self-tape, then a Zoom recall, then an in-person audition about a year after that. Throughout the whole audition period I was given so much information, I promise you this never happens.

I got pages and pages of notes about Saara, I got pages of information about her childhood, her history, about her life, her memories, her relationships, about her character. It was gold dust, it was like Christmas when I got those documents through. Not only that, but then I could build my own memories of her, her childhood, my own relationships and really flesh those out, which is how I like to work anyway.

The whole character really comes from him, and then I brought what I had and we kind of worked together, it was highly collaborative. He was really a guiding light for me when we were shooting as well.

To what extent do you think Saara’s cultural background will play a part in how audiences connect with the show?

It is really interesting, I try not to think too much about what audiences will think, it’s a dangerous hole to fall into as an actor, especially as an actor who wants people to enjoy it and enjoy the performance, so I try not to think too much. I hope that people will find it interesting and the different cultural questions that come up intriguing.

Saara herself is probably the person that thinks about it the least. Her brother and her partner both have problems with what she does for different cultural reasons. Saara is just so focused in on the puzzle and the work, that she is often muted to a lot of the political things that are going on around her.

I hope people will be able to fall in love with her regardless of whatever preconceptions they might have of various different cultures, and be fascinated by this brilliant young complicated woman. I hope they are not too shocked to find a woman at the center of this story, rather than pushed into the background.

Saara’s relationship with both John Yeabsley and Danny Patrick feels quite paternal in the show. Was that something which occurred in the moment, or did it develop through rehearsals?

A mix of both actually. Simon and Mark are highly skilled actors who found that kind of relationship dynamic with me through the work we did. It is something Saara is grasping for quite desperately after what happens early on in the series, where she is looking for some figures in her life that are simply not there.

Both Simon and Mark played it beautifully. But also as actors and people, they are some of the loveliest people I have ever met. Simon is one of the kindest and most generous people and did really look after me. He looked after Hannah, as well as Danny looking out for Saara. It was a tough shoot with long hours, which proved to be emotionally demanding. He really made me laugh when I needed it, and he really looked out for me.

Peter was also an incredibly kind and caring director and looked after all of us. He was very protective and just as caring as Simon. He has been a great guide for me in this weird first year out in the industry, which is all new to me. Mark has been the same, and I can’t really put into words how brilliant he is as an actor. As a man he is just so kind and gentle and caring, and was so generous.

I got the chance to ask him so much about the work that we do, about acting, and I took so many notes from him. It was a mixture I think of both of them just being those kinds of people that really helped in the work, allowing them to find those character relationships

Describe for me your perfect Sunday afternoon?

Love this question, brilliant. Okay, my perfect Sunday afternoon. I wake up, I don’t care what temperature it is, but the sky has to be visible, blue sky. I go outside on a walk, got my music, got my headphones. Find a park bench, listen to music for like two hours. Take off the music, read my book, a piece of fiction, for two hours. Put the book down, listen to the birds for 30 minutes. Go home, eat some pasta, watch a series and a movie, see a friend, and go to bed.

Find out how Hannah Khalique-Brown fares when against her esteemed co-stars when The Undeclared War premieres on Peacock this coming Thursday, August 18.