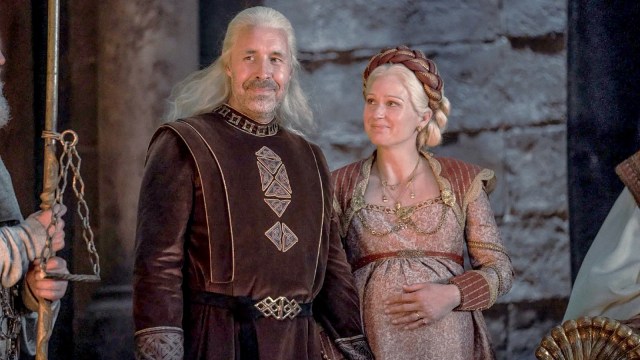 Warning: The following article contains spoilers for House of the Dragon’s premiere.

HBO’s House of the Dragon wasted no time getting into the nitty gritty when it premiered last Sunday. The Game of Thrones prequel featured violent jousting scenes, dismemberments (including a severed penis), and a birthing scene that should make those of with viable uteruses swear off sex for good. And this happened all in the first episode!

However, it was the latter moment that really got people talking after the premiere — and now a conversation on Twitter has fans comparing it to the infamous Red Wedding.

In the House of the Dragon, King Viserys Targaryen (Paddy Considine) is forced to make an impossible decision when his wife, Aemma Arryn (Sian Brooke), is unable to deliver because the infant is stuck in a breech position. Desperate for a male heir, Viserys allows himself to be talked into giving his wife a forced, agonizing, and fatal cesarean rather than lose both the mother and the child. Though, it’s all for naught, as the baby dies shortly thereafter anyway.

On the other hand, The Rains of Castamere, the penultimate episode of the third season of Games of Thrones, features one of — if not the most disturbing scenes of the entire series. When the House of Stark and their army arrive at the Twins for the wedding of Edmure Tully and Roslin Frey, they are betrayed by Roose Bolton, and both Robb and Caitlin Stark, along with Robb’s pregnant wife Talisa, are brutally murdered.

Talisa, in particular, is stabbed with a knife to the stomach, killing both her and the child. Both scenes are extremely disturbing in that they involve pregnant women being killed in a horrific manner, leading the Winter is Coming Twitter account to pose the following question:

“Which was more upsetting: the Red Wedding from Game of Thrones or Aemma Arryn’s birthing scene from House of the Dragon?” the account tweeted on Sunday, right before the second episode aired.

Shockingly, people had thoughts! And the majority seemed to agree that despite the extremely disturbing nature of the House of the Dragon scene, the Red Wedding was still worse.

“This question is disrespectful to The Red Wedding,” quipped one user — as others chimed in with similar thoughts.

Many people pointed out that the birthing scene couldn’t compare because, well, viewers didn’t even know Aemma yet.

Podcaster Noam Blum pointed out the somewhat obvious — that the Red Wedding featured a knife to a pregnant woman’s stomach in addition to countless other on and offscreen deaths. (And Robb’s direwolf Grey Wind!!)

Although, there were at least a few votes for the birthing scene — in addition to some who felt both were equally disturbing.

Following “The Heirs of the Dragon,” co-showrunner Miguel Sapochnik spoke with The Hollywood Reporter about the birthing scene and elaborated on why they decided to make the scene so graphic.

“Aemma says, ‘The child bed is our battlefield,’ says Sapochnik, who is showrunner on the series along with Ryan Condal. ‘We felt that was an interesting way to explore the fact that for a woman in medieval times, giving birth was violence. It’s as dangerous as it gets. You have a 50/50 chance of making it. Many women didn’t. If given the choice, the father would choose the child over the mother as a cesarean would kill you. It was an extremely violent part of life. We have a number of births in the show and basically decided to give them different themes and explore them from different perspectives the same way I did for a bunch of battles on Thrones, where each time I tried to put a different spin on each so it wasn’t just doing the same thing, as I don’t think putting a bunch of violence onscreen for the sake of violence does any good in the world.’”

Despite what Sapochnik says — “putting a bunch of violence onscreen for the sake of violence” seems almost like the unofficial slogan for Game of Thrones, so we’re guessing that the rest of House of the Dragon likewise won’t be for the faint of heart.