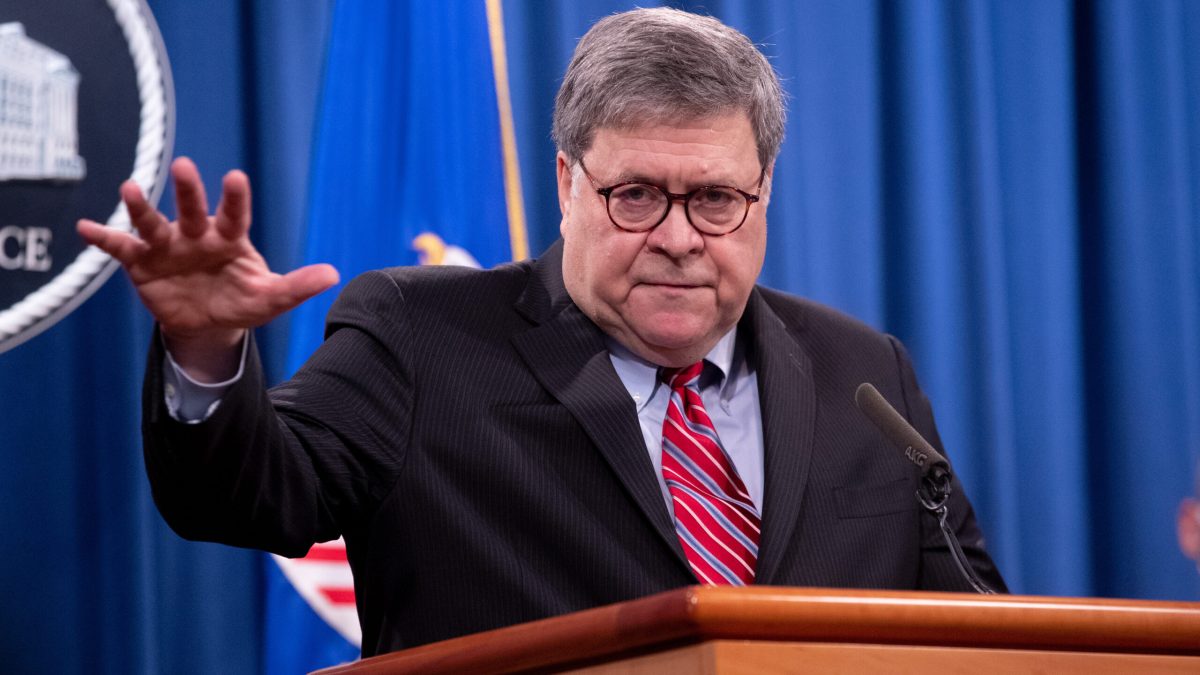 WASHINGTON, DC - DECEMBER 21: US Attorney General Bill Barr holds a news conference to provide an update on the investigation of the terrorist bombing of Pan Am flight 103 on the 32nd anniversary of the attack, at the Department of Justice December 21, 2020 in Washington, DC. Barr announced criminal charges against one of the alleged Libyan bombmakers. The bombing occurred on December 21, 1988, killing all 259 people on board and eleven on the ground in Lockerbie, Scotland. (Photo by Michael Reynolds-Pool/Getty Images)

Former United States Attorney General William Barr said Donald Trump would have his vote in 2024 despite the former president’s fraudulent claim that the election was stolen from him.

In an interview on Today, he said he was happy with the Trump administration up to that point. In his Dec. 2020 resignation letter, Barr said that Trump’s record was “historic” despite “relentless, implacable resistance.”

After the election, Barr said, is when Trump took things too far.

“After the election, [Trump] went off the rails,” he said. “He wouldn’t listen to anybody except a little coterie of sycophants who were telling him what he wanted to hear.”

Barr’s assertion that there was no widespread voter fraud was the most credible attack on Trump’s election claims up to that point, and it was made even more effective because it came from inside the Trump administration.

Trump, famous for dressing down people who don’t agree with him, was surprisingly soft on Barr when he left, calling their relationship “very good.”

Today anchor Savannah Guthrie asked Barr about whether he agrees with Rep. Liz Cheney’s assertion that Trump is unfit for office and should never run again. Barr gave a noncommittal answer, saying instead that he was going to vote Republican, no matter what.

When pressed on Trump specifically, Barr said he couldn’t conceive of not voting for his party’s nominee, because the left’s progressive agenda is “the greatest threat” to America.

“Because I believe that the greatest threat to the country is the progressive agenda being pushed by the Democratic Party, it’s inconceivable to me that I wouldn’t vote for the Republican nominee,” Barr said.

“So even if he lied about the election and threatened democracy as you write in your book, better than a Democrat,” Guthrie replied.

“It’s hard to project what the facts are gonna turn out to be three years hence, but as of now, it’s hard for me to conceive that I wouldn’t vote for the Republican nominee,” Barr reiterated.

He did stop, however, at endorsing Trump or saying he thought the former president should run the ticket.

“I certainly have made it clear, I don’t think he should be our nominee and I’m gonna support somebody else for the nomination,” Barr said.

The interview was Barr’s first live on camera since he resigned, and one day away from the release of his book One Damn Thing After Another: Memoirs of an Attorney General.

Unsurprisingly, Barr’s appearance on the show drew some ire online.

The word shame came up a lot.

Others took the news as an excuse to tune out.

A large number of people think he’s just trying to sell his book.