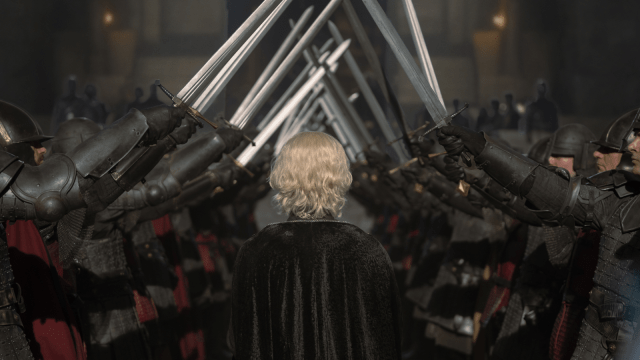 Warning: the following article contains spoilers from House of the Dragon episode “The Green Council.”

House of the Dragon episode nine ended with quite the bang, setting up what is sure to be an eventful and action-packed finale.

At the center of that ending was The Queen That Never Was, Rhaenys Targaryen, portrayed by Eve Best. She and director Clare Kilner unpacked the stakes behind the pivotal moment in which Rhaenys busted herself and her dragon Meleys out front under the Dragonpit.

She explains how Rhaenys put the Hightowers in quite the pickle, saying they had to either try and save their trump card (being Meleys) for the impending civil war, or save face in front of the populace of Kings Landing by allowing the civilians an exit from the carnage.

Of course, the tricky part of that is that if they went for the former option, they also risked themselves getting burnt extra crispy. Kilner unpacked the idea further in an interview with Entertainment Weekly.

Of course, the way this whole sequence unfolded turned out to be utter chaos. Kilner tells EW that the soldiers were initially ordered to close the doors, but Rhaenys’ entrance caused so much confusion that Otto’s orders to open the door went unheard.

With the Hightower family’s best chance at well and truly securing the Iron Throne for themselves flying off into the sunset, the current throne sitters are now dragon-less sitting ducks.

We can’t wait to see how Rhaenyra responds in the House of the Dragon season one finale, coming to HBO next week.