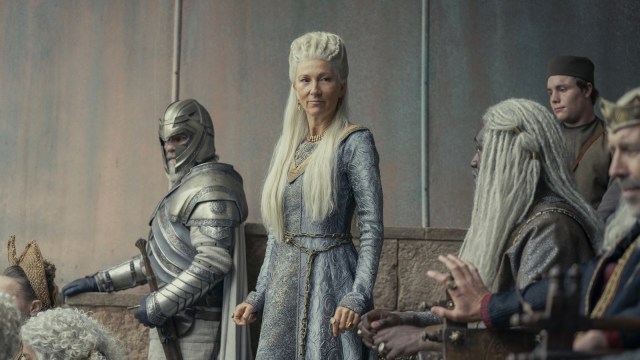 Casting director Kate Rhodes James is receiving accolades from House of the Dragon viewers, who are especially impressed by Eve Best’s turn as fan-favorite Rhaenys Targaryen.

Redditor Malik Barry shared a still photo of Princess Rhaenys in the r/HouseOfTheDragon subreddit with the caption, “Rhaenys Targaryen is breathtaking. Perfect casting done by HOTD.”

Rhaenys was the only child of Aemon Targaryen, Prince of Dragonstone and the eldest son of King Jaehaerys I Targaryen. The opening scene of the first episode of House of the Dragon sees The Great Council reject Rhaenys’ claim to the Iron Throne in favor of her cousin, Prince Viserys Targaryen. This injustice earns her the humiliating monicker The Queen Who Never Was.

The trials and tribulations of the princess resonate with many fans who are excited to see how her storyline develops. ImpressionDry7898 describes her as magnetic and fascinating.

Considering that the double standards of the patriarchal system that shaped Westerosi culture derailed Rhaenys’ destiny, Redditor IrateSamuraiCat is curious to see how she will respond to the acceptance of Princess Rhaenyra as King Viserys I’s new successor.

All_Seeing_Lemon was swept away by the chemistry between Rhaenys and her illustrious husband Corlys, Lord of House Velaryon and Master of Driftmark (Steve Toussaint), especially when she locked eyes with her spouse with an expression of pride, devotion, and relief.

Rhaenys is a complex character navigating a rigid system defined by casual discrimination. Already in the first episode, Best showed an uncanny ability to convey a wealth of emotions in a single glance. The high point was the quiet rage she projected when her cousin was named Lord Vassal of the Seven Kingdoms culminated in the perfect death stare. There’s no question that she will be a force to be reckoned with as the story unfolds.

Watch House of the Dragon on HBO Max.