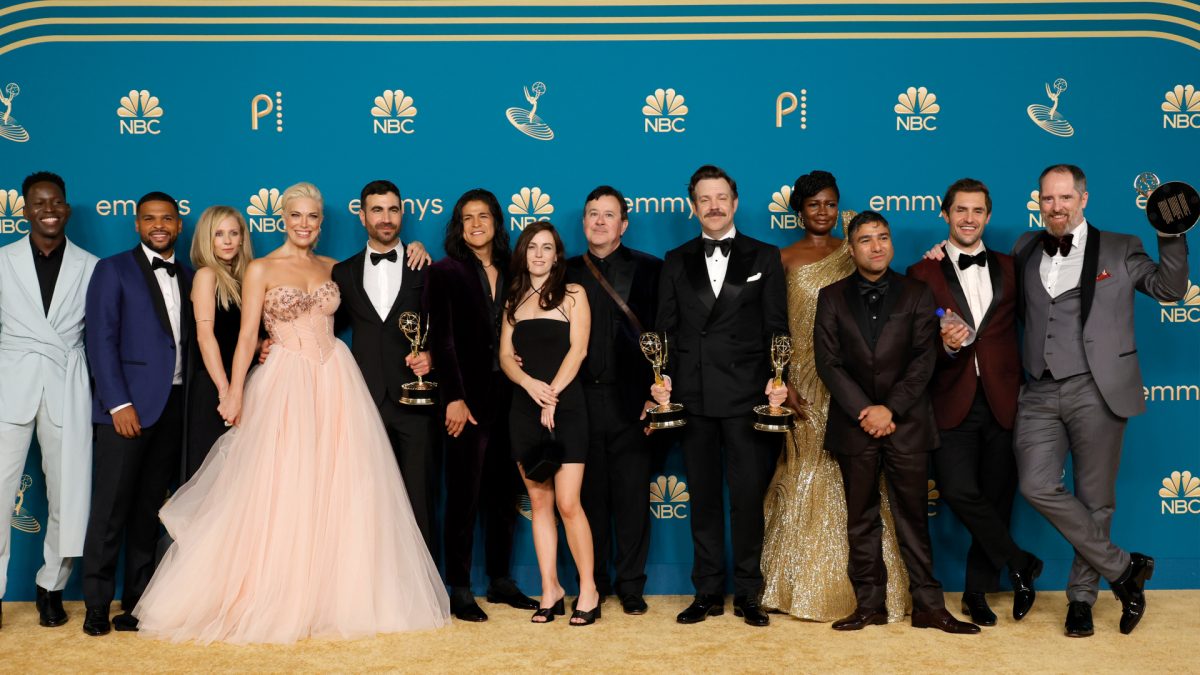 Depending on who you were rooting for, and if you saw the heel-turn unveil coming or not, your feelings and even emotional outburst at the conclusion of Ted Lasso in season two will have quite a wide range.

It’s been a while since we last saw Richmond on our screens, yet with the third season of Ted Lasso getting close enough that we can almost wrangle it in, let’s revisit just what in the gosh darn heck happened as season two came to a close last year.

Let’s start at the very end and peel back, shall we? In the season two finale, titled “Inverting the Pyramid of Success,” there’s a man watching a football team practice, and though we’re pretty sure what’s going on here, it’s not entirely all in focus. We start to make out that it’s not Richmond here, and that almost definitely, that’s our main man Nate there, with totally gray hair and his back to us. Then we get the utterly awful Rupert come by and lean in to whisper something in this man’s ear, and it’s a call back all at once, and it crystalizes who this is and what happened.

Indeed, it is Nate, who has decided to become a boss, and has accepted the job to coach the team that Rupert just bought, which was unveiled to us just moments earlier (we’ll get to that), and he has turned his back on Ted while also stabbing him square in his back. It’s sad, but it was also foreshadowed for nearly the entirety of season two.

Asking how the second season ended isn’t as easy as it seems on the surface, because once you start telling one tale you can tug at that thread even a little bit and it opens up explanations on top of explanations.

Such as, what went down with Keeley and Roy? How did Richmond FC end up after their season within the season? What about Rebecca and Sam? And of course, Ted and Coach Beard?

Things with Keeley and Roy, well, actually we aren’t sure. It seems that they’ve toppled all the obstacles thrown their way throughout the season — from Nate kissing Keeley, to Jamie professing his love for Keeley, to Roy stubbornly resisting her great advice and affection for who he actually is, to just normal day-to-day relationship stuff. Yet, as we get to the coda of the season finale, we see Keeley packing up her desk as she gets set for her new career running her own PR firm, and Roy is helping her out when he presents two plane tickets to her for a romantic, long-stay getaway for just the two of them. For her, a chance to refresh before her new beginning, and for him, the first offseason of his career he doesn’t have to rehab an injury or something else football- (sorry, soccer-) related. But she can’t go because she is set to start right away, and this new gig means a great deal to her. Even in presenting solutions that seem to fit to him, Roy is left standing alone, with Keeley suggesting that he goes and enjoys on his own. As Roy teeters between supreme confidence and the chewy, soft, sometimes insecure layer underneath, it’s not clear if this is all no big deal and it’s just a moment of hurt, or if this signifies a shift between them, and for each of them individually.

We also get a glimpse that, after rejecting an offer for him to leave Richmond and play for Raja Casablanca back in Africa, Sam has set his sights on opening a restaurant in London. Inspired by the wooing from Edwin Akufo, who isn’t who he appears to be in the end, Sam feels a bigger connection to both his native home and his current one all at once, and now wants to blend the two while staying to play for Richmond. He comes to talk to Rebecca and finds Ted in her office as well, and he tells them both that he is staying, and gives a great monologue about his decision and why he had to make it, while looking at Ted, but clearly talking to Rebecca.

Whether they will get back together, or decide that they are better apart — being that one is a player and the other is the team’s owner — is still, sorry to say, on the table.

Richmond FC are playing in the second league throughout season two after being relegated to end season one. They need to win the league to move back up, and they succeed in doing so, making the first step of their journey to return to the Premier League — and win the whole dang thing — complete. As the entire squad celebrates the feat on the field, the only person not happy is Nate, who walks off the field.

Even though Ted goes out of his way to make sure to give Nate credit for his False Nine scheme that they deploy during the final match, Nate still feels underappreciated and taken for granted. The man who is constantly bullied to start the series turns into the bully himself, becoming more and more self-centered, selfish, and ego-maniacal, sadly, as he turns into the villain (or co-villain) of the show. When the team returns to the locker room after their celebration on the field, er, pitch, Ted finds his “Believe” sign torn in half, presumably by Nate, and the assistant coach is nowhere to be found.

Earlier in the season, at Rebecca’s father’s funeral, we see Rupert whisper into Nate’s ear, but we are not privy to what is said. First of all though, Rupert gives his ownership stake (by proxy of his new wife) back to Rebecca, ceding any interest in the club and calling it a gift.

Clearly it was not a gift though, and already it feels that something nefarious has happened. Which brings us back to the first whisper. That was clearly a foreshadowing moment to the final scenes of the finale, going back to what we mentioned up top. We see Rupert whisper into a man’s ear, and when this man turns around, it’s revealed to be Nate, who has joined Rupert at West Ham United. Rupert had to get out of any ownership stake with Richmond in order to be an owner of another club.

Moments before we get this reveal, Rebecca and Ted are talking in her office about the new news that Rupert has purchased West Ham, to which they are both a bit nervous, disgusted, and also welcoming of the challenge to come.

Yet, nobody on the inside saw the move of Nate going to join Rupert, which gives us our evil empire for Richmond to go up against. How will that play out in season three? Will Richmond take down this big bad, or, will the show steer a bit more realistic and not let them take down the richer, more competitive club, even if the audience is rooting for it to happen?

Let’s get a little further into Nate’s demise. We learn that he is the one who revealed Ted’s struggles with anxiety and panic attacks to the press, by virtue of Trent Crimm telling Ted outright (which leads to Trent’s departure from The Independent newspaper as well). Coach Beard pretends that he doesn’t know what all the fuss is about, but he also not-so-subtly confronts Nate about the betrayal, because only a few select people knew about it. He also asks Ted if he’s going to do or say anything about it, but he doesn’t want to force Nate to own up to it or apologize, hoping he’ll do the right thing. But we know now that Nate does not own up to it, even as it’s clear that people are on to him as the culprit.

The rest of the Greyhound gang

Lifted by unifying around Sam’s stance earlier in the season against the team’s then-sponsor, the Greyhounds have come together and are becoming more than teammates, showing genuine bonds.

This comes to fruition several times throughout the finale. First, at halftime when the squad is losing 2-0, Ted asks the club if they want to ditch Nate’s False Nine, or stick with it. The straight-shooter on the club, Jan Maas, says that the strategy is sound but the execution is lacking. This leads to a decision from Isaac, the team captain, going and putting his hand on the “Believe” sign (that Nate will later tear apart) to unify together and go out and accomplish the goal of getting back to the Premier League. As things unfold, the Greyhounds only need a tie in the current match to gain that spot, coming down to a critical moment on a penalty kick.

Usually Jamie would take the penalty, but he instead gives the ball to Dani, who has struggled all season with guilt from accidentally killing the team mascot on a penalty kick in the season’s first episode. Dani takes a breath, utters his familiar phrase, “Football is life,” and boots in the goal to even the score and send Richmond back to the promised land.

There are so many loose threads and open-ended dilemmas, that even with all the closure in the finale, we have no idea where some of these things will go. The show toggles between lighthearted and serious with grace — from the feeling that of course the team is going to overcome the odds despite its underdog status — to being served reality and not always coming through.