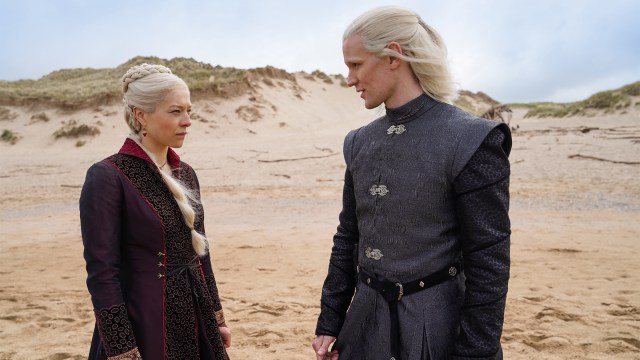 The following article contains spoilers for the sixth episode of House of the Dragon.

With the sixth episode of House of the Dragon came the moment fans of the show so far had been dreading, the big time jump has finally arrived. Ordinarily, time jumps would not be concerning as House of the Dragon has already had several. But with the time jump between the fifth and sixth episodes of HBO’s hit Game of Thrones prequel series came aged-up versions of our favorite characters, including Rhaenyra Targaryen, and Alicent Hightower.

But exactly how long was the time jump between the episodes, and besides the recasting of two of our favorite characters what else had changed in the world of Westeros while we were absent?

How long was the time jump between episodes five and six of House of the Dragon?

There are a few giveaways in the sixth episode of the series which tell us exactly how much time has passed since episode five. Firstly the show makes reference to Otto Hightower (Rhys Ifans) being ousted as Hand of the King 10 years prior and King Viserys Targaryen (Paddy Considine) says that Lord Lyonel Strong (Gavin Spokes) has been his Hand for 10 years while refusing Strong’s resignation.

However, that event occurred in episode four, not episode five. Luckily Laenor Velaryon (John Macmillan) refers to being married to Rhaenyra Targaryen for 10 years. So we can confirm that there has been a 10-year time jump between episodes five and six because their wedding occurred at the end of episode five. This will not even be the last time jump or recasting in the series, as both Alicent’s and Rhaenyra’s children will be aged-up sometime in the future.

In the time between episodes five and six, Rhaenyra – who has been recast from Milly Alcock to Emma D’Arcy – has given birth to three children while married to Laenor Velaryon who has been recast from Theo Nate. However – as is evident from the sixth episode – the children’s fathers are not Laenor but Ser Harwin Strong (Ryan Corr). Alicent Hightower has also been recast from Emily Carey to Olivia Cooke, while she now has multiple grown children to King Viserys Targaryen as well.

Time has not been generous to King Viserys, who is slowly suffering from his leprosy. The episode did not grant us a glimpse at how Otto Hightower, Rhaenys Targaryen (Eve Best), or Corlys Velaryon (Steve Toussaint) have fared in that time, but we should find out soon, as the next episode is titled ‘Driftmark’ which will undoubtedly see a return to the seat of the House Velaryon. A return that will be bittersweet because of Leana Velaryon’s death in episode six. She too was recast, twice in fact, but in episode six she was played by Nanna Blondell while she was played by Savannah Steyn in episode five.