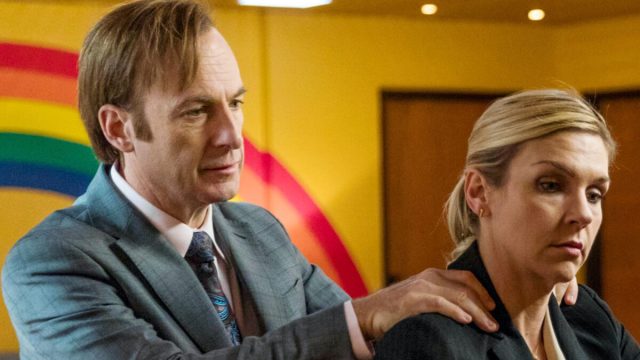 For years now, it’s been a running joke regarding Rhea Seehorn, Better Call Saul, and the Primetime Emmy Awards.

It’s not “ha ha” funny but more “are you kidding me?” funny as the Emmys have overlooked, snubbed, slighted, and (insert Emmy committee being oblivious remark here) Seehorn’s performance in Better Call Saul.

With her finally getting a nomination this year, in the show’s sixth and final season, fans were ecstatic she got the long overdue recognition. Then, they (we/me) turned our brains a little more to the existential dread of not knowing that left open a different type of disappointment. Sure, we were sure that she’d get the call to the stage to accept the award this year. She deserved the win and could even earn it. But, knowing the Emmys, we knew the likelihood that she’d get snubbed. Again.

After that became reality, something else became even more astounding.

The show as a whole — the one acclaimed by peers, critics, fans, cats, ostriches, and every other breathing creature on Earth — still has not picked up one, even one, victory at the Emmys.

First off, damn we gotta get rid of the Emmys. If it weren’t for the show and the speeches, we’d be all the way out on that corruption. The fact that the award is actually called the Primetime Emmy Awards means that it’s just that, a TV show, an overbloated affair for those involved to probably pocket some dough.

Coming back though, damn, wow…Seehorn and her fellow colleagues from Better Call Saul now have 46 total Emmy nominations, and a stunning zero wins to their credit.

Cool, cool cool cool (with it very much not being cool at all). Let’s lean against a wall laced with shadows, light up a smoke to share, and bask in some calmness amid all that is wrong around us.

So, at the top, Bob Odenkirk got the nomination for Outstanding Lead Actor in a Drama Series, starting with the first year of the show in 2015, five times in the series’ total six seasons. FIVE friggin’ times the Emmys were like “Damn, he’s really, really good!” And five times, they said, “Eh, nah, not for us, not this year at least.”

The likes of Banks and Giancarlo Esposito were nominated and shutout, as was co-creator Vince Gilligan. The show also received noms (and didn’t win) for categories such as Outstanding Single-Camera Picture Editing For A Drama Series and Outstanding Special Visual Effects In A Supporting Role among several others.

Sure, it’s not the sexiest or flashiest show out there — although, for anyone actually paying attention, it’s far sexier than, say, Succession, with way more substance and style than even The Boys or Squid Game — but jeez, this cast and crew had already shown what they can do and were on the radar long before Saul because of Breaking Bad.

Is it because Breaking Bad won enough times that voters just didn’t wanna keep handing the same universe some hardware? The show that predated Better Call Saul in real life but was (mostly) the sequel to the show racked up 58 total nominations and won 16 times — basically a 28 percent success rate.

Holy moly, Odenkirk himself played three characters, and each one with aplomb!

Oh, and the people, they’ve got some opinions.

Is it the slower-paced, methodical storylines and plot? The elegance and grace the show carries itself with? Not enough sex? We could harp on and on (and plenty out there have tried to surmise how the hell it’s possible). But we’re not trying to figure out what the hell other people have going on in their brains when this is the outcome of their decision-making process. Best not to peek behind that curtain. The (not so) great thing is, because the final season of Better Call Saul was split into two parts, it will actually have another chance to pick up its first Emmy in next year’s show. We think BCS fans might just watch Twitter for that one, rather than tuning in to the show itself.