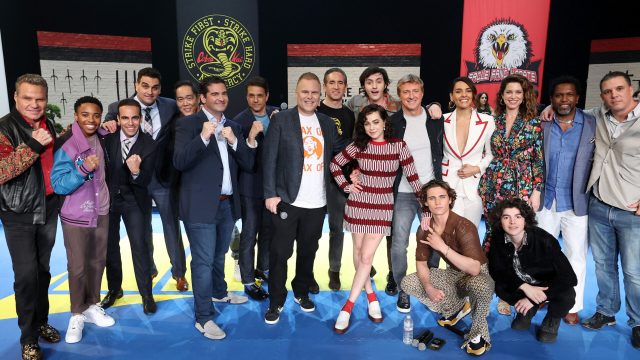 Like most shows featuring high school-aged kids, the “kids” playing those characters usually are bit older than their on-screen personas.

Of course, Cobra Kai is no different, although some of the cast was in their teens when the show started out in 2018, many of them have gone on to become of legal drinking age, and some of them have aged further past that.

Just how old are the kids of Cobra Kai? Let’s run through the main characters, as well as some of them that have made enough regular appearances that you know who they are by now if you’ve been in on the show through its four seasons so far.

And you’ll notice that some of the new crew members are actually in their teens right now, which is good for the show, especially as it continues on. Some characters might even start to phase out or graduate on to other things.

Even with that said, still be prepared to say “wow, but she/he looks so young!” quite a few times as you read through this list.

The boy who became a man right before our eyes over the first four seasons, Miguel is the heart and soul of Cobra Kai.

Sure, other characters emerge and even share as much screen time, but the central plotline still revolves around Miguel and Johnny, Miguel and his mom, Carmen, and Johnny and Carmen. The LaRusso’s are primary as well, but every real fan knows where our allegiances really lie.

And we see Miguel emotionally and mentally growing up as well as season four winds down, with him starting out on his own to Mexico City to find his biological father, somewhat inspired by Robby and Johnny, even if their relationship still leaves a lot left to be desired.

The actor, Xolo Maridueña, did the same, going from a teenager to an of-age man, as he just turned 21 this summer.

The person on the other end of the love story that keeps coming back around and has fueled a lot of the show’s storylines is Mary Mouser’s Samantha LaRusso.

Sam has plenty of fallouts with the core characters of the show, but she seems to rally behind the right people and eventually brings out the best in them (well, we’ll see with Robby).

While she may look young (as do plenty of the characters of the show), she’s actually 26 years old in real life, but has nailed the persona of being a confused teen trying to figure it all out.

Perhaps seen as the heartthrob and/or bad boy of the show, Robby has faced a ton of adversity and had to come of age well before his years.

From loner to on the lam, jumping from father figure to father figure while keeping his real dad, Johnny Lawrence, at bay through most of the series so far; Robby is lured to the dark side a little too easily at times, even as he turns face and does the right thing every now and then, too.

While on the screen he still seems to be a teen, the actor, Tanner Buchanan, is 23 years of age.

The next two characters have to be considered together always, even when they’re rivals.

We’re thrilled that both Hawk and Demetri have reconciled (mostly because Hawk stopped being a douchey jackass), and for sure, when the show started out in 2018, they both looked like and were teenagers.

Considering the journey Hawk, who is going by Eli again in season four’s end, has gone through, it’s been a treat watching him grow through the show.

One of the youngest actors on the set, the actor who plays Demetri, Gianna DeCenzo, is still just on the cusp of adulthood at 20 years old.

His practicality and sometimes dour demeanor is still steeped in reality, and we couldn’t be more thrilled that not only did his best friend come around, but he even found love in the show.

List joined the show already out of her teens, and is 24 years old right now.

Samantha’s best friend who endears us all, we’re still saddened that she didn’t remain a bigger part of the show in the latter seasons. The actress, Nichole Brown (who hails from NFL Hall of Fame lineage) is out of her teen years now as well, at 21 years old.

Moon sticks by Hawk’s side even as he grows darker and darker, but she eventually is the lens through which we see his true heart. Hannah Kepple is 21 now and will turn 22 this November.

The kid who plays Anthony LaRusso, Griffin Santopietro, can’t really be called a kid anymore, either on-screen or off.

When one goes through their growth spurt during a show’s progress, they are going to look a bit different as the show goes on, and he surely does deviate from season one when he was just 13. He is now 17 years old.

Not a main character, but he appears in every season still, and we’re happy when Bert, played by Owen Morgan, is on screen. The actor turned 18 this year.

One of the bad kids, especially pushing season one (and Miguel’s progress) forward and returning often as a tormentor, the actor Joe Seo, who plays Kyler, just turned 32 years old in July of this year. He’s by far one of the older ‘kids’ on the show.

At first a bully, and provocateur, she comes to be Demetri’s love interest in the most recent season. While on screen they’re in the same grade, she is a bit older than he is in real life at 26 years old.

An older Cobra Kai student even in the show, and totally obnoxious, Paul Walter Hauser plays the part so well all the way up to framing Johnny in season four. Right now, he’s 35.

Not a huge player, but he’s in there often enough and you know him when you see him. He is 21 years old on the cusp of season five.

Chris and Mitch also go hand-in-hand as they joined Cobra Kai together. They both follow Hawk as he becomes a leader of sorts and someone who those that were once bullied look up to as a role model to get revenge. The actor, Khalil Everage, is also 21 years old.

A younger member of the show both on and off-screen, Oh is 15 and will turn 16 while season five is airing.

Nathaniel Oh’s character goes through some tough stuff as well, but he also turns into a bully of Kenny at one point.

Though his on-screen time is a bit limited, the actor John Cihangir, who plays Doug, is actually a stunt man as well, and he’s 28 years old.

He was even nominated for an Emmy for his stunt work on Cobra Kai in 2021, and is known as Dustin’s stunt double from Stranger Things, too.

Moon’s ex-girlfriend, who gets beaten by Sam at the All-Valley Tournament in season four, is 21 years old.

One of the newer members of the show, it’s clear that Kenny will have a bigger role going forward after his entrance to the show in season four.

He is meant to be a bit smaller and younger in the show, and will bring on a new era of Cobra Kai, we think, as some of the other characters (and actors) start to age past believability for the roles they’re playing on the show.

Another newbie to the show, she might have a bigger role in season five too. The actress Oona O’Brien is also a real teen at 16 years old.

She helps torment Kenny early on, helping turn him toward karate and setting up a new storyline.

As many of the newcomers to the show, she is smack in the middle of her teen years at 15 years old.

Another Kenny tormentor as part of Anthony LaRusso’s crew, he’s 14 in real life.

One more member of the punks running with Anthony early in season four, he’s turning 15 this month.

There we go, a nearly full-on and comprehensive list of the ‘kids’ of Cobra Kai, which many of whom aren’t even kids anymore.

Season five of Cobra Kai comes to Netflix on September 9.