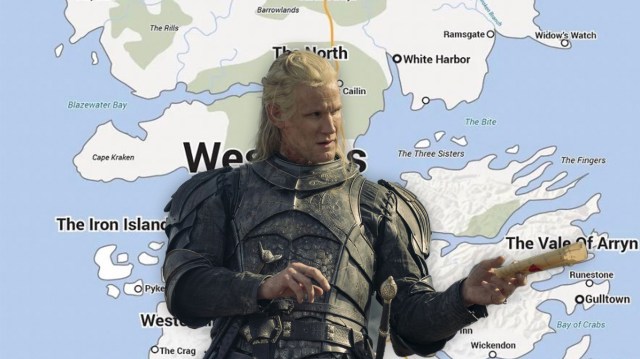 The lands of Westeros are wide and full of wonder and while we’ve seen these locations in both Game of Thrones and House of the Dragon may still have trouble pointing out where they are on a map.

Well, help it here! One Game of Thrones fan has crafted a map of Westeros that will immediately look familiar to anyone who has used the internet before as it’s styled like Google Maps.

To grasp the geography of Westeros, House of the Dragon Source on Twitter have you covered with this map that spans from the highest point of The Lands of Always Winter to the lowest lands of Dorne. Other regions that you’ll notice include The Reach, The Vale of Arryn, The Iron Islands, and of course, The North. What you may not have realized is just how all of these places combine with one another to make Westeros.

While this map gives you a basic look at the lands of Westeros where the shows take place, some fans went a step further not only crafting a map of this area, but even more of the world in A Song of Ice and Fire.

And if that wasn’t enough, there is even a transit map of Westeros to check out.

Now when you see an episode that includes traveling all the way from Winterfell to King’s Landing you can picture exactly how far the journey between the two really is and call it to question when it takes place in just one or two episodes.

Of course, will all fantasy series’ while a map is important it will never stand in the way of plot progression and that might be why both Game of Thrones and House of the Dragon has kept us so hooked.

If you’re wanting to revisit these locations in the show now that you know where they stand Game of Thrones is available to stream in full on HBO Max.