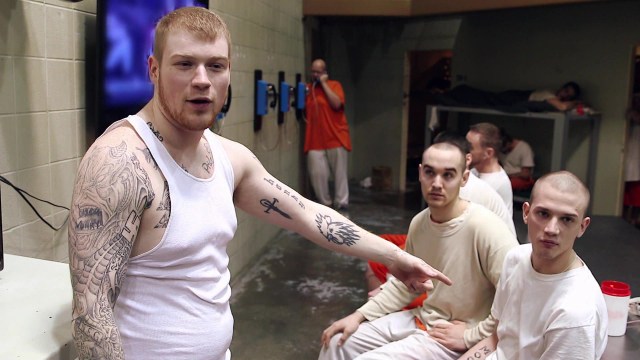 60 Days In is an A&E docuseries where regular people spend two months undercover as inmates to expose illicit activity in U.S. jails. Otherwise known as Snitchin’ Nightmares, this reality show and its brave participants have survived six full seasons, with a seventh currently airing. Over that time, many questions have been raised about the show’s veracity. Some viewers think it’s legit while others think, like much of “reality” TV, it’s staged. We’ve put 760 words in 60 Days In to uncover the truth.

“The editing was fake”: Statements from the prosecution

Season 1 “villain” Robert Holcomb had some harsh but believable critiques about the production. “The show was real, but the editing was fake,” said the real-life teacher/undercover stop sign-runner. “The inmates figured me out in two hours.” This corroborates the account of actual Season 1 inmate DiAundré Newby, who, along with his fellow detainees, was told that the conspicuous cameras were capturing “first timers”:

“It didn’t take us long to figure out that they weren’t really focusing on first timers . . . We didn’t know that any undercovers had been put in [with us], but with most people who’d been doing this a long time they were always suspicious that that might be a possibility.”

Newby took “newbie” jailbird Holcomb under his wing and unknowingly became a supporting character on 60 Days In. The climax of his arc is a sucker punch from another inmate, which Holcomb is hinted to have provoked. Newby said there was no connection: “Whenever I was assaulted by [the inmate], it actually didn’t have anything to do with how I addressed Robert [Holcomb]. That was a completely unrelated incident.”

Moreover, Newby wasn’t removed from Holcomb’s unit as a title card states. Rather, he returned after only 10 minutes of questioning.

Another of the show’s misrepresentations, according to Newby, is the rampant use of illegal drugs. It turns out, that many are just tobacco pills:

“There are these things called Stonewalls and they’re not really illegal, you can purchase them on commissary for $12 a box. And people who had a habit of snorting stuff on the streets would take these Stonewalls and crush them up and make them into a line and snort them.”

In conclusion, Newby said that A&E “did alter a few things” in order to “get ratings.” Holcomb had a similar takeaway:

“The producers told me it was going to be a documentary, they lied . . . The show was not about finding drugs, it was about ratings. I was there to entertain.”

“This show is so real that it hurt”: Statements from the defense

Speaking about her “sentence” in 60 Days In, Barbra Roylance Williams declared, “I was terrified. I was absolutely petrified—the most scared I’ve ever been in my life.” Williams served in the same season as Holcomb but in a female unit. “I had things stolen from me. There were issues with taking a shower, trying to sleep, and where to sleep,” she told Business Insider.

“Jail was not peaceful. That kind of wore me out,” recounted Maryum Ali, another undercover inmate in the female unit. However, she noted that she “never saw violence on a level that scared [her].” That wasn’t the case with certain male undercover inmates, as they bore witness to (and sometimes caused) all types of brutality.

Executive producer Gregory Henry explained how horrifying it is to make a show that’s at the mercy of jailhouse society:

“I’ve never worked on a project where I have no control. This show is so real that it hurt. We all just had pits in our stomachs because we had, in addition to the 300 cameras, we had roughly 70 microphones. We could hear every conversation. We could hear every cell . . . You hear what you’ve never heard before.”

In spite of their fear and victimization, 60 Days In-siders made discoveries that led to the termination of several corrections officers, widespread institutional reform, and the arrest of one person for attempting to smuggle drugs into Clark County Jail.

As is true with virtually all reality shows, 60 Days In is a slice of life cut into a TV-shaped piece. Authenticity is lost when shooting among skeptical inmates and editing raw footage into an entertaining narrative, but it’s so negligible that even disgruntled ex-participants concede that the show is, essentially, real—and, certainly, helpful. “Was there some television drama there? Absolutely,” said Sheriff Jonathon Horton, whose Etowah County Detention Center is the setting of Season 6, but he and his staff learned “a million little things.”