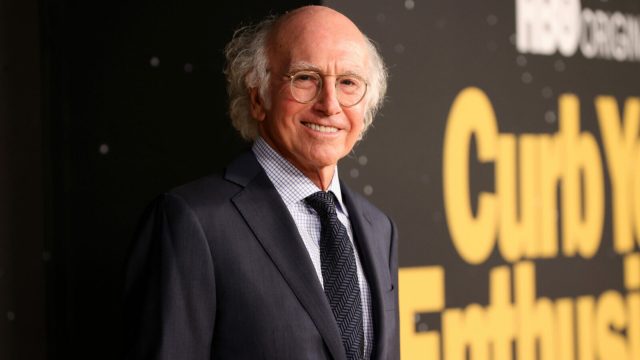 It’s a question that’s lingered out there more than once over the years.

Is Curb Your Enthusiasm improv, or is it a scripted show?

Well, the truth, like with a lot of things, lies a bit in the middle. We know in shows that aren’t improv there is usually room for an actor to deviate from the original line a little bit, or to add (or subtract) some nuance to the wording and/or delivery. In other instances, someone might do two, three, 12 takes of one scene, changing up the wording on some takes, giving it a bit of improvisation. At the heart of the Larry David brainchild are some real-life situations — albeit with a wackier twist to them — and great dialogue that feels free-flowing, like it’s really just a couple of people having a chat.

That brings us back to the titular question, one that itself — as alluded to — is a bit nuanced as well.

While there is no actual “script” for Curb Your Enthusiasm episodes, there is a guideline, a framework, though it’s not straightforward and set in stone. It’s more of an outline, to give some direction to what the episode hopes to accomplish and where certain scenes and interactions should go.

Without any script at all, it’s doubtful that we’d get payoff within episodes, so a framework for an episode exists, as does some general dialogue. If there’s room, or someone in the writers’ room comes up with a great line or two, then that will be in the script, but the power of the show lies in those who help create it.

As David himself said all the way, way back in 2009, it’s unscripted acting. They don’t necessarily call it a script, but there is structure that gives an episode a life, a vibrancy, a plot, and even an outcome. Within all that, the talented and hilarious crew is free to do what they do. From main cast members such as Cheryl Hines, JB Smoove, Jeff Garlin, and Susie Essman, to those who pop up quite a bit through the years like Ted Danson, Richard Lewis, and even Kaitlin Olson, they’re all left to let their wit wander and inspiration take them to places that couldn’t possibly be scripted.

When being asked about acting, David had this to say:

“It’s not really acting, the way actors act, because it’s just doing stuff that really anyone can do. This gives me a luxury that… I wouldn’t enjoy acting from a script. I don’t think I would. I would be standing there waiting, ‘When do I go? When do I go? When can I talk? I wanna talk, and I’m sick of standing here doing nothing. God, let me talk.’ And that’s what I can do here. And also you can actually listen to what the other person is saying, instead of thinking in your mind, ‘When’s it my turn? When’s it my turn?’ So, uh, it’s different, it’s not really acting, per se.”

In response to that, Curb costar Garlin said David is wrong, and that he is indeed a great actor.

Smoove talked about taking improv classes in his early days that helped him out with the cadence and camaraderie of playing off one another in Curb.

“My first day on Curb, our first scene together, Larry said, “Hold on, hold on, cut, cut, cut, cut, cut. You know what, don’t do it sketch-y, do it as yourself. I knew exactly what he meant.”

Adding it all up

While there are several takes of improv dialogue on the show, it might be that one person has a great line in one take, and another has their great line in another take. That’s where it’s up to the crew behind the scenes to make it feel cohesive, to feel like it’s great written dialogue between them.

In an interview with Variety, show editors Jonathan Corn and Steve Rasch said that there’s a lot of work once the show has stopped filming to make it feel like it was one great scripted success.

“We’re trying to pluck together the best stuff into a coherent scene in the funniest way possible,” Corn said.

To which, Rasch gave his take.

“Our goal is to make great sentences, not great edits. We make scenes sound natural — as if they were written that way.”

Instead of being rooted in lines that were carefully crafted and need to be done in a certain way to get the payoff, the show gets its grandiose vibes from the overall vision, from the cast’s ability to provide hysterical, and quick-witted reactions. Real reactions need a level of the unknown, so that the element of unpredictability keeps the mind sharp and flowing. That’s basically the way that on-stage, live or recorded, improv works. Think Whose Line Is It Anyway? There’s a prompt, then they (re)act.

The show brought together a cast that knows how to bounce things off each other, rooted in the genius David engulfed and possessed from being one of the creators of and creative minds behind Seinfeld.

The outline, or skeleton, for each episode, is quite short, and way, way shorter than other shows of its same ilk. So, the dilemma or direction of each show is laid out for the cast to read through and absorb and put their minds in that framework. From there, it just starts to flow.

As this great Nerdstalgic video above outlines, Curb Your Enthusiasm is quite unlike any other show out there. It’s a bit of sketch comedy, with the elements of a great scripted, organized television sitcom, and it’s also just a theatrical stage performance, all at once. “So despite being fiction, it feels a little bit like nonfiction,” says the narrator on the video.

Echoing what David said above, the “acting” of the show is really reacting, and staying not just in the moment, but with the moment, with the feeling, and reading what’s coming out of the other people in the scene.

“Nobody knows what anyone else is going to say or do. This leads to spontaneous, more authentic reactions than you’d get in a properly scripted show,” the Nerdstalgic video says. “The stars are truly in the moment. Rather than waiting for the cue to say their next line, they instead wait to see what the other person is saying, just like you would in real-life conversation.”

We could go on and on with quotes from the cast and instances that show the unscripted nature of the show.

Just based on all that, it’s pretty safe to say that yes, Curb Your Enthusiasm is improv.