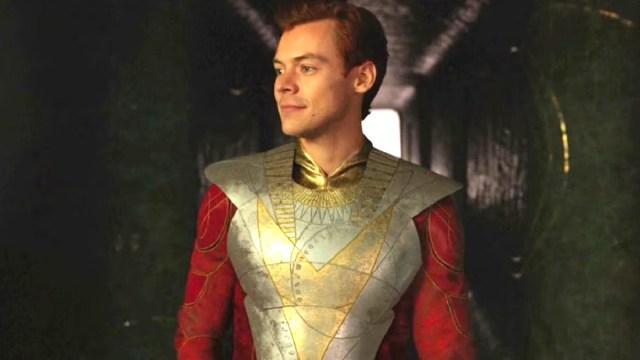 There is a rumor going around the internet that Harry Styles, musician, actor and former One Direction member, might be joining the Star Wars universe. It would not be too far-fetched for the musician to join the Star Wars universe; after all, Harry Styles is no stranger to both space and a franchise owned by Disney. Styles appeared in the post-credits scene of the Marvel movie Eternals, as Eros the Titan, also known as Starfox.

Styles first appeared in the Christopher Nolan film, Dunkirk, and is slated to star in Olivia Wilde’s new film Don’t Worry Darling alongside Florence Pugh later this year. He will also star alongside The Crown actress Emma Corrin in a film called My Policeman. Now that we’ve cleared up why Harry Styles appearing in the Star Wars universe would not be out of place, let’s take a look at the rumors.

Is Harry Styles joining the Star Wars universe, or is it a rumor?

We have no official word on the matter of Harry Styles joining the Star Wars universe, so as of right now, it seems like his casting is just a rumor. The rumor appears to have originated with an article by Giant Freakin Robot. The article reports that “Harry Styles is currently looking to join an upcoming Star Wars show”. This does not mean that the actor will be joining the Star Wars universe any time soon.

Just because we have ruled out Harry Styles being cast in a Star Wars project does not mean the actor and musician cannot join the universe down the line. In fact, Star Wars is filled with many charismatic actors, and Styles would not even be the first who is also a musician, just look at both Billy Dee Williams and, more recently, Donald Glover.

If Styles did want to appear in a series, there are multiple in development, and as he already has a relationship with Disney it would not be out of line for him to appear in one of them. For example, we know that Star Wars: Andor, Star Wars: Ahsoka, Star Wars: Skeleton Crew, Star Wars: The Acolyte and the third season of The Mandalorian are all in development, so if Disney and Lucasfilm did choose to cast Styles, they would have more than enough room for him.

Hopefully, the actor gets what he wants – if he does want it – as it definitely would not be the worst thing in the world if he were to join the Star Wars universe. Let’s just hope he plays an original character.